“Not worth a damn . . . . been crakin’ on this optic for the past hour and getting nowhere fast!”

“Well, hang in there, she’ll come around.” And I quickly walk away to the 50 yard range.

It’s not going to go well because he doesn’t really understand what he’s there for. So let’s chat a bit about your next trip to the range to zero your AR-15.

New shooters have a fondness for believing that they are aligning their sights with the center of the barrel so they hit the center of a distant target. MMMMmmmmm – not so much. Set aside your AR for a bit and let’s start at the beginning – your ammunition. Just what the heck are you shootin’?? And, just where do you plan to shoot it?? And what is the purpose for your AR-15??

I teach the use of a carbine as a defensive weapon. This will typically be in a CQC situation with most engagements at 50m or less, the remote possibility of a 100m engagement and very, very little chance of a weapon being employed in a defensive situation with the threat being more than 100m away.

Next, what round are you going to be using? The standard NATO 5.56 round has a muzzle velocity of 3020 fps and has a bullet weight of 62gr. As soon as the bullet leaves the barrel gravity begins acting on it (let’s leave wind out of the formula here, that’s a discussion for another time). And, your bullet will begin to drop. The charts for an American Eagle AE223N (a civilian approximation of a standard NATO 5.56 round) are as follows: 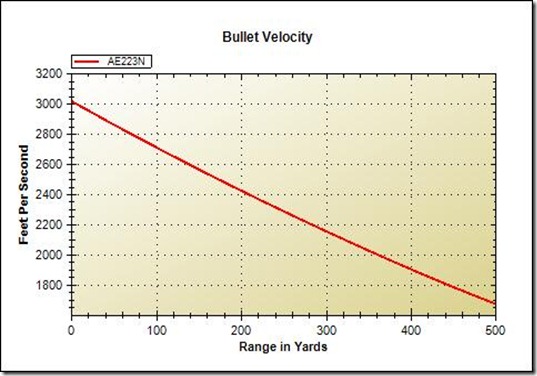 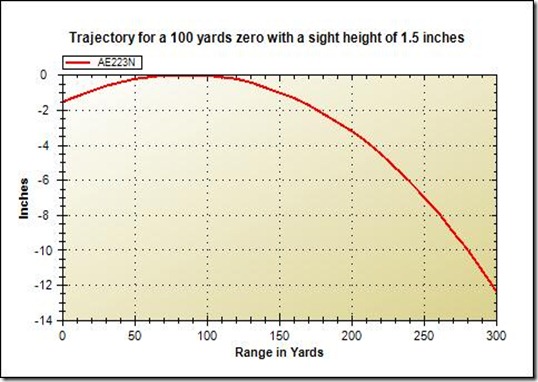 Just what do these charts mean? First, the bullet bleeds velocity quickly. Within the first 100m the bullet has lost around 300fps. However, over 200 yards the round is fairly “flat” with the round being approximately 3 inches below the zero point at 200 yards.

Let’s compare these characteristics with the AE223 round that I bought in a 1,000 round “brick” this past week. The AE223 is a slightly faster round with a 55gr bullet and its characteristics look like this: 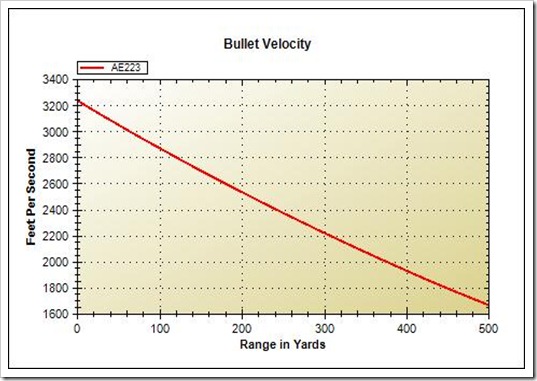 While the speed drops here as well, the initial muzzle velocity is 3250 and nearly 2900fps at 100m. The trajectory is a bit “flatter” when compared to the AE223N; 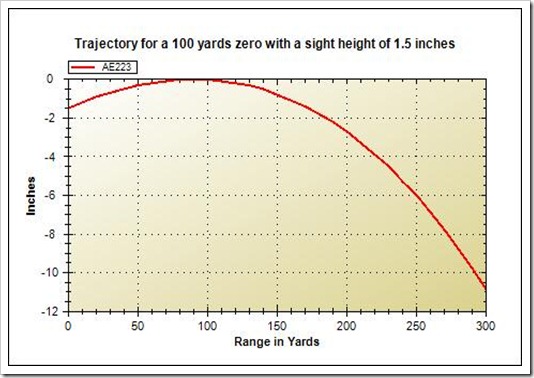 OK, we are using our weapon at a distance that will typically be 100m or less. For me, I was using a AE223 round. I wanted it to be “zeroed” at 100m. This will give me a weapon that will hit within 3in of “center” between 0-200m. More than effective for any threat I may encounter.

You will note from the trajectory chart that when the bullet leaves the muzzle it begins to climb. For a weapon zeroed for 100m, it is at that distance that your bullet will “kiss” the center of your target. Once past the 100m point, the bullet begins to drop and is about 2.5in below center at 200m.

When you are “zeroing” your weapon, you are setting your sights (iron in my case) such that you are compensating for the flight of the bullet so that, at your chosen distance, there is “zero” drop and you hit the center of your target. Note that if you would decide to “zero” at 200m, or 300m your sight would need to be adjusted accordingly.

The same goes for your bullet as well – heavier bullets, faster drop, lower velocity – all of which affect your impact point.

Next, select a Zero Target for the range you want to zero at. You can find them on the www.ar15.com website at this link. Note that they acknowledge the different types of rounds. These targets will get you very close with some final tweaking being needed for your specific ammunition once you are essentially “on target”. Note that these are 25m targets – and will save you a lot of walking time back and forth down range. Especially if you are zeroing for longer distances – 200m or 300m. 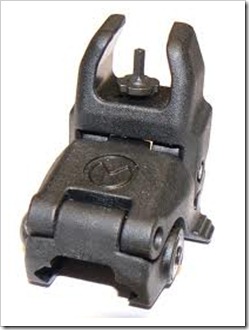 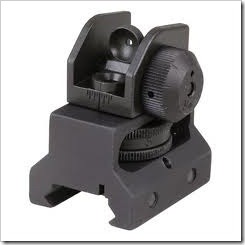 You are now ready for your first 3-round group. Find the center of the group and adjust accordingly based on the location of the hits and the instructions on your Zero Target. Here is my alignment target and my groups: 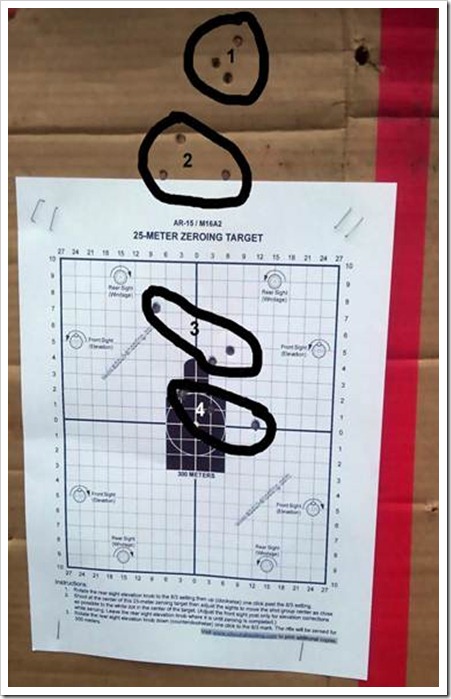 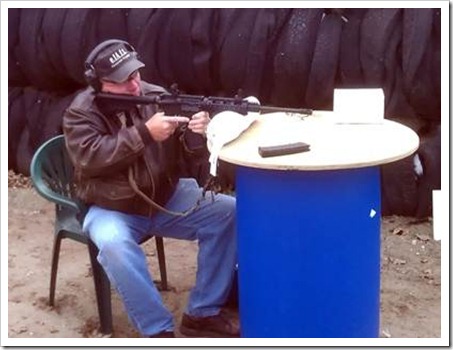 So, how did the puppy shoot after this? Well the boy and I did some “cognition” drills – your shooting buddy calls out target and round count and initiates your round by a command like “SHOOT” or “FIGHT” and you engage the targets in the order specified. Here is my first drill with my new “zeroed” AR-15: 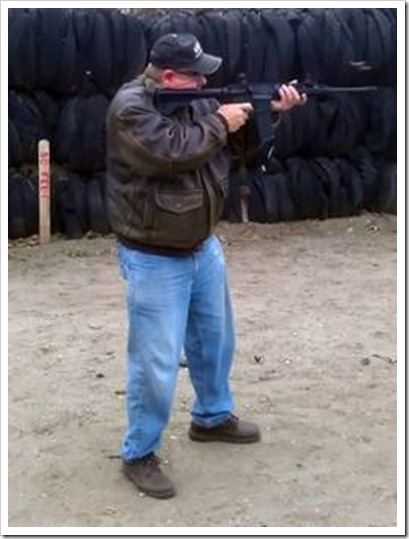 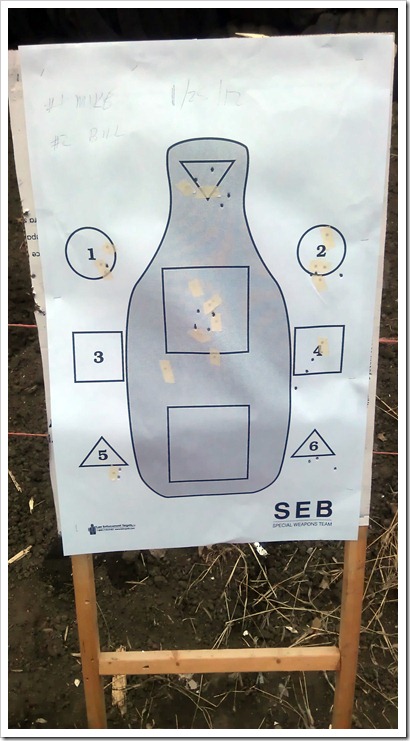 We shot number of cognition drills checking for consistent groups, whether the sights remained firmly attached to the rails and just general weapon operation. I was more than pleased with the results.

So there you go. “Zeroing” your AR-15 platform isn’t rocket science. Still, you have to be aware of what you are doing, why you are doing it and have a known, consistent process to get a solid final result.  Give this a try the next time you go to the range to “Zero” your AR-15.