Just the Basics – the AR-15 Carbine

An introduction of a basic AR-15 Carbine. 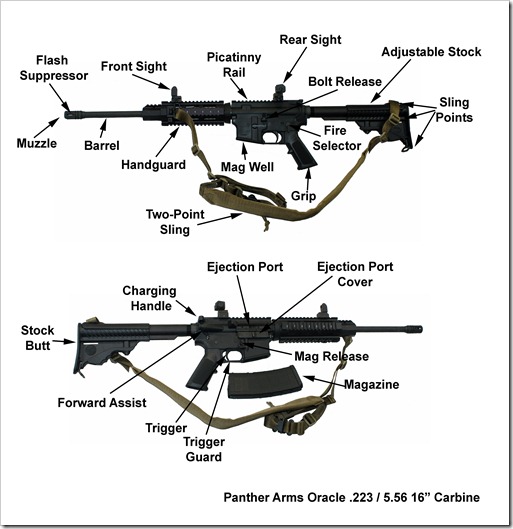 The Charging Handle can be used to manually eject a spent casing or a malfunctioning round. Once released, the Bolt Carrier Group will fly forward normally.

The Ejection Port is the location that spent casings are ejection from on the Upper Receiver. The Ejection Port Cover is provided to protect the chamber from dust and debris when the weapon is not being fired.

The Magazine Release is pressed inward to release the Magazine from the Lower Receiver.

The Bolt Release (sometimes called the “Ping Pong Paddle”) is activated by pressing on the “paddle”. This releases the Bolt Carrier Group and allows it to fly forward stripping a new cartridge from the Magazine and seating it in the chamber.

The Fire Selector switch the weapon between Safe and Fire in civilian models. A Burst or Auto position is added to military and some law enforcement models.

The Grip is the portion of the Lower Receiver that is actually “gripped” by the shooter.

The Trigger is the component that is pressed to the rear releasing the Firing Pin contained in the Bolt Carrier Group and firing the cartridge.

The Trigger Guard provides protection against an accidental discharge from rubbing the Trigger against something unexpected.

Unloading can be done by depressing the Magazine Release and capturing the Magazine as it falls from the Magazine Well. To display that the weapon is empty, rack the Charging Handle to the rear ejecting any un-fired cartridge that may still be in the chamber out of the Ejection Port. Push the “handle” of the Bolt Carrier Release down locking the bolt to the rear. This allows the shooter to easily verify the weapon is, indeed, empty.

The Stock on most modern AR-15 Carbines is adjustable to establish a proper fit to the shooter for the mission and environment at hand. Also located on the Stock are multiple Sling Points used to attach a portion of a weapon sling to carry the weapon easily on the shooter’s body. A Sling (in this case a “Two Point” Sling) is used to hang the weapon from the shooter’s body. This allows them free hands to deal with whatever situation is before them.

The Handguard is used to protect the shooters support hand from the massive barrel heat that is generated by firing the weapon as he grasps the weapon. The image shows a Handguard that is also a “Quad Rail” Picatinny Rail mounting system. These rails can be used to mount Forward Grips, Sling Points, Lights, Laser Targeting Systems as well as a host of additional attachments.

What is the difference between a “Carbine” and a “Rifle”? Well, it depends on the time period you are looking at. Carbines began to come into their own towards the end of the Civil War. Traditional battlefield rifles were very unwieldy for mounted troops. Heavy, difficult to load, long – it was not a good mix. The advent of the lever action rifle began during the latter half of the war. Still, these “long guns”, while easier to load – were still difficult to handle. Enter the carbine – shorter, firing the same cartridge as the sidearm that was carried they became the staple of the Mounted Calvary. The most famous were the generations of Winchester Lever Action Carbines. And that is what depicted a carbine of that time period – a light rifle that fired the same cartridge as the sidearm the shooter carried.

World War I saw heavy use of bolt-action battlefield rifles and the introduction of the modern day machine gun – little changed in the carbine arena. Fast forward to World War II and the introduction of Garand’s battlefield rifle. Top loaded, rapid firing, exceptionally accurate - yet it was still heavy, bulky and slower to load than was desired. Enter the modern evolution of the battlefield carbine – the M1 carbine. Shorter barrel, loaded by a bottom-fed magazine and significantly lighter. This was the “pattern” established in the military that is carried forward to today.

Vietnam saw the introduction of the M-16 battlefield rifle. This was compressed into the KAR-16 and finally into today’s version – the M4 Carbine.

So, generally, a carbine fires the same cartridge as a full-sized battlefield rifle but comes with a shorter barrel, it’s lighter, usually has an adjustable stock and it’s equipped with the ability for equipment “add-ons”. A smaller, more compact weapon is much easier to handle in both urban and a wide range of field environments and has become a favorite of military organizations worldwide.

Posted by eiaftinfo at 8:46 PM