Well, the spring time analysis continues.  We had some really nice weather pop in so I snuck out of work a bit early and hit the range.


Purpose for today . . . work on why the heck the last time I was hitting left of center consistently from 50 feet . . . and see what my draw stroke times were as well as a couple accelerated follow up shots.  Would my speed and precision generate effective hits?


Let’s talk about that – effective hits – for just a bit.  For today’s work I was using the LE SEB targets.  It’s become my standard range target and provides a number of regions from head, high center mass, pelvic girdle and an array of number shapes for cognition drills.  When I working with local law enforcement a qualifying hit is within the silhouette. Were that my chosen standard today, my range trip would have been awesome!  I would have been only down 2 out of 60 rounds at 15 feet and down 1 out of 60 at 30 feet.  I’ll take it!!!  Sadly, my standard for today was that the hit had to be within the high center mass box.  Heavy sigh.  So let’s talk about it.


One of the reasons I post reviews of my range trips like this is to simply offer a “process” other instructors and shooters can evaluate to see if it works for them.  I always read folks saying “ya gotta do the work”, “hit the range and train!” . . . but few offer solid examples of how they do that and how they evaluate where they are, things they discover and corrections they made.  If you want to improve, you need to shoot and self-evaluate . . . and this is an example of how I do that – for better or worse.


I like to tape targets.  So you will see taped targets from 15 feet and 30 feet.  In the upper left you will see strips of the time of my initial shot and then follow up shots.  For the 15 feet target you will notice that the corresponding image for strip #2 is missing.  This is a malady known as “cranial rectal insertion”.  I posted the timing strip, taped the target and realized I that taped it before I’d taken the image.  Yep . . . head up my a$$ . . . so sue me.


So let’s look at the targets first.  Each timing strip is 20 rounds (and yes, somewhere I missed writing down times for one set, heavy sigh).  Strip 1 showed first round engagements were right at 2 seconds +- a few hundredths.  Not bad honestly.  However, looking at shot placement I was down 6 with one round completely off the target.  Not what any shooter wants to see, I racked up a 70%.


Image 2 was missing but you can pick up the times from the second timing strip.  I obviously slowed down about a quarter second but actually became worse.  Heavy sigh!!  I was also noticing my rounds were still left of center – one of the things I was trying to figure out. 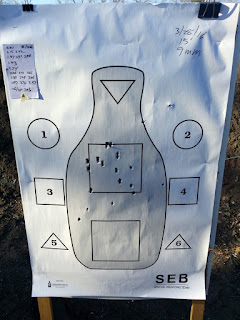 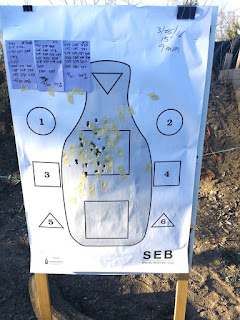 Timing strip 3 the primary correction I made was to firm up my grip and really work on focusing on the center of the target, driving straight to that point and really focusing on the front sight. My times remained good (all draws were from concealment with a long sleeved Henley shirt that was untucked) while my accuracy increased significantly dropping only 3 out of 20.  Overall I was down 18 for 60 . . . final “score” of 70%.


Let’s move back to 30 feet.  Distance can magnify problems, errors, little things that can affect your shooting.  So let’s look at target 1 from 30 feet. 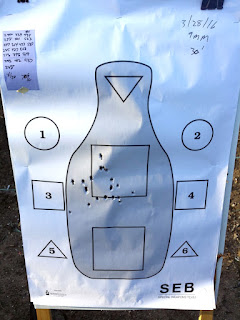 Notice the times are a bit longer – half secondish or so.  More distance, you have a bit more time, make use of it.  However, notice I am STILL a bit left of center.  So, I have slowed my time, firmed my grip, focused on driving straight and really paying attention to the front sight . . . what could be left.  Well, there is finger placement . . .


I usually stress the end 1/3rd of a shooters finger trigger being placed on the trigger.  But one of the symptoms of too little finger is to actually “push” the weapon to the left.  Could it be that simple?  So I slid about a quarter more of the end joint pad onto the trigger . . . imagine that . . . . 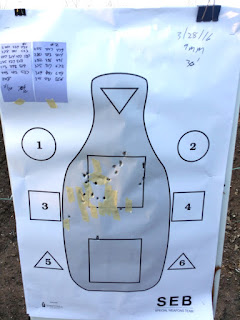 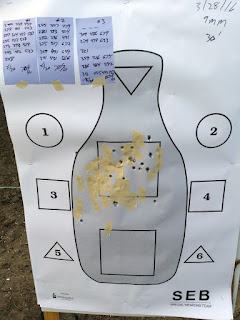 One last time with timing strip 3.  First round time is now right at 3 seconds with around a second between shots but my hit rate is finally at 80%, my minimum desired percentage.  I’m down 17 out of 60 for a final “score” of 72%.  That said, even with a less than desirable outcome, I’ve found, evaluated and corrected at least one problem . . . I need a bit more finger on the trigger.  This then becomes a point to remember, work on and to continue to evaluate to see if this correction holds true throughout my work going forward. 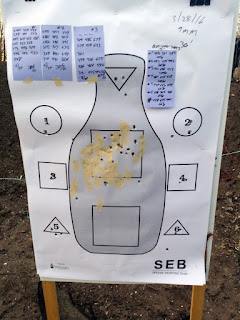 I loaded up another 21 rounds split between two magazines and spent some time with the numbered shapes and the head shot.  The final time strip shows the results working from 15 feet.  Since these are precise shots I didn’t place a time limit on them, simply waited until I was ready to shoot.  It appears the average time was 3-ish seconds per shot.  I dropped 4 rounds out of 21 . . . a score of 81%.  That’s acceptable, nothing to write home about, but OK.


So why should a shooter go through all this work.  A few thoughts . . .


How do you know where you “are” if you don’t measure yourself from time to time?  And when I say the word “measure” I mean you should develop a reasonable plan, pick 2 or 3 things you want to focus on and then shoot enough rounds to make that meaningful.  Today was 141 rounds to be precise over about an hour and a half with documentation and taping between shooting sets.  If gives me specific points to measure, focus on, work through corrections and then establishes a new bench mark going forward.


This makes sense to me . . . may not to you, but it does to me.  Making holes in paper just for the sake of sending rounds down range doesn’t make sense to me.  I am fond of “practice with purpose” . . . and you should be able to clearly articulate the reasons you are doing what you are doing.


So there you have it.  Obviously I have things to work on.  But, I did create movement so I’m pleased with that. I would encourage you to make a plan, take some time, shoot the plan and document it . . . and then share it with the rest of us.  We can all learn from what you discover.