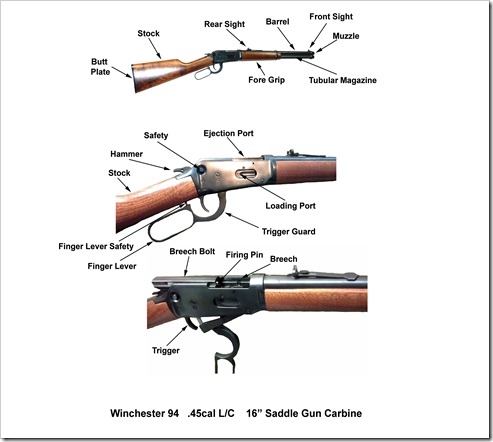 The Tubular Magazine contains the cartridges to be fired and feeds a new cartridge into chamber each the Finger Lever is operated until the magazine is empty.

The Finger Lever is the mechanical component used to eject expended casings from the weapon and push a new round into the chamber.

The Finger Lever Safety requires the shooter to firmly grasp the Finger Level and the stock to enable the trigger.

The advent of the carbine in the late 1800s provided a person an accurate, longer range weapon, easily carried and handled on horseback that typically used the same cartridge as their sidearm. Is it any wonder it remains a popular firearm nearly 120 years later?

Posted by eiaftinfo at 9:06 PM