A shotgun is an excellent close-quarter defensive weapon. It provides solid fire power, it’s less dependent on an accurate sight picture and it can present a frightening threat to an attacker.

It can handle a wide array of munitions – from a highly accurate rifled slug typically weighing 1 ounce to bird shot. Options can also include Buckshot and a full range of shotgun BB sizes as well. While it is tempting to go with a slug or Buckshot for defensive ammunition in your home, lighter weight shot between 5 and 7 provide good deterrence but much less risk of penetration of your home’s walls. This can do a great deal to protect family members who may be taking up cover or concealment in other rooms.

When the word “Tactical” is wedded to the name, the implication is that the weapon is primarily designed as either a defensive or offensive weapon to be used against a human threat. Typically they are outfitted with pistol grips, augmented alignment system, perhaps a collapsible stock, picatinny rail systems to mount lights, lasers or additional fore-grips. The Remington 870 Tactical Shotgun shown is my personal tactical shotgun and is a very basic model.

The basic components of the shotgun are as follows: 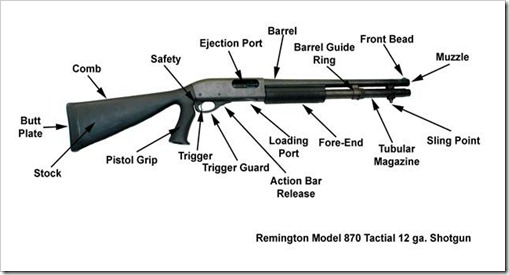 The Butt Plate rests against the shooters shoulder. It may be replaced by a Recoil Pad to lessen the effect of the shotguns recoil on the shooter’s body.

The Trigger releases the firing pin and fires the round contained in the shotgun’s chamber. The Trigger Guard protects the Trigger from accidental discharges due bumping against brush, clothing or other items in the area. The Safety prevents the Trigger from being pressed to the rear unless it has been released by the shooter. (NOTE: Safeties are mechanical devices and can fail!!!)

The Action Bar Release, when depressed, allows the Fore-End to move to the rear. This is typically activated to allow the Fore-End to be repeatedly operated to unload the shotgun.

The Loading Port provides the ability to load shotgun shells into the Tubular Magazine.

The Sling Point provides a connection point for a Sling.

The Muzzle is the region in the immediate area at the front of the Barrel.

The Barrel provides form and shape to the pattern off the shot as it leaves the Barrel. It may also be rifled to provide spin a slug increasing both its accuracy and range.

The Front Bead acts as the front sight of a shotgun. The shooter’s eye acts as the rear sight when their cheek is firmly welded to the comb and the shooter is looking down the Barrel to the Front Bead. Tactical Shotguns may also use traditional Front Sights and Flip-Up Rear Sights or even a Red-Dot sight.

The Barrel Guide Ring provides proper spacing between the Barrel and the Tubular Magazine and holds both rigid allowing easy use of the pump action of the Fore-End to both eject spent hulls or to load a new shotgun shell into the chamber.

The Ejection Port provides an opening that allows the spent hull to be ejected, making room for a new shell.

Posted by eiaftinfo at 9:26 PM