Honestly, I’m not a “long gun” kinda guy, never really have been. I’ve used a .22 to hunt small game from time to time – squirrel and rabbit. I was issued an M-16 upon arrival “in country” in ’70 and only called upon it in defense a handful of times. I find no real enjoyment in the hunting of medium to large game, so I can’t say I put nearly the number of rounds down range with my long guns as I do with my handguns. Still, I’ll come close to 1,000 with my AP4 and probably twice that with my “Oracle”, enough to keep working on those particular skills.

The long guns I work with primarily are those I have chosen as part of my defensive arms “suite”. What prompted this particular post was a return to the range this past weekend to finish up the task of zeroing the scope on my AP4. My preliminary work was detailed in this post – the trip on 10/26/14 was to polish it up and then do some preliminary analysis of my accuracy with the weapon. And that prompted this “Part 1” post . . . What does “accurate” mean?

When it comes to shooting a firearm, and in that case, shooting both my AR4, a .308 and my Oracle, a .223 – just how would I measure the accuracy of the weapon and my ability to shoot it accurately? Someone will typically say something “well, just shoot a small grouping on the target – that’s accurate, right?” Well, yes and no . . . but let’s start there.

The engineer side of my brain kicks in about here – when I talk about definitions – so let’s use the typical measurement when defining a long gun and it’s accuracy – the MOA – Minute Of Angle. A rifle that is highly accurate is typically defined as a “sub-M.O.A.” rifle, meaning that at 100 yards, it has the ability to consistently shoot a group that has an inner diameter less than 1-inch. Where did that number come from?

100 yards has become an industry standard for part of the definition of M.O.A. – the distance from the muzzle of the rifle to the face of the target. To complete the definition, you must remember a few constants:

There are 360 Degrees in a complete circle.

So, why not simply build all guns to shoot at the sub-MOA level? It’s not that simple. While there are many elements that are part of the composite set that determines a shot’s final accuracy, the rifle – especially the barrel – cannot be manufactured to “perfection” each and every time. Very, very, very tight tolerances . . . but not perfection. Ultimately, the rifle is simply shot in a controlled environment, the size of the final group is measured and that becomes the accuracy for that particular rifle. Which will certainly change with time as the barrel wears or various brands and loads of ammunition are shot. For example, an AP4 was shot by the NRA museum and reviewed in January 2006. In that article, using three different cartridges, shooting multiple groups with each cartridge, averaging them all together, it was determined that that specific rifle had a MOA of 1.01 . . . at the end of that particular test. Meaning, it produced a group that was – on average – 1.01 inches in diameter at a distance of 100 yards.

This then, is the most technically sound measurement of the accuracy of a rifle – that rifle’s typical MOA when shot from a distance of 100 yards. Carrying that out farther, the implication is that, all other things remaining stable, at a distance of 1,000 yards that same rifle is capable of shooting a group that has a diameter of 10 inches (10.47198 inches to be exact).

The next measurement of accuracy is – what do YOU need it to DO in your specific defensive situation? That is my primary measurement when I consider the ultimate accuracy that I need to have with my defensive long gun. Frankly, from a legal standpoint, it’d be pretty difficult to explain your need to shoot a “threat” while they were 100, 200, 300 yards or farther away. Unless you were actively taking fire from them, it would be very tough to articulate in a court room why you needed to engage and kill that person.

That being said, as a husband and father who wants the ability to defend my family, I also see the value in being able to do exactly that – engage and stop a threat that may well be determined to do me harm – even from a very long distance away. So that is my “baseline” for defensive shooting. To be able to get combat effective hits – hits that do real damage to a threat’s ability to cause me and my family harm – from a long distance away – up to and including 300 yards.

A third measurement of accuracy is – what do you want it to be right now, on the range, with the target before you. For example, I was unable to complete the zero of my scope the other day so on this range trip I got an additional 9 rounds to dial in the windage I again checked the accuracy. I picked both the “3 Box” and the “4 Box” and alternated 3 rounds into each quitting after 9 rounds to the 4 and 12 rounds to the 3. My goal – 90% “Hit Rate” or higher on the designated boxes. The reality . . . I was down 1 on each box leading to a “Hit Rate” of 93% on the “4 Box” and a 92% on the “3 Box”. I was “accurate” 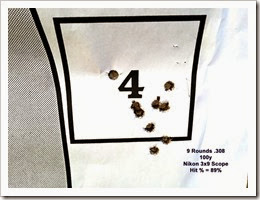 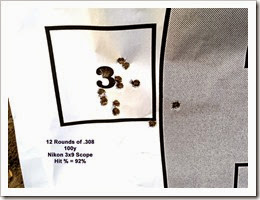 A forth measurement is what you MUST do . . . without fail. This qualifier typically falls to the trained sniper – that person who, on an average day can prone out, throw a round in their chamber and hit the “ocular cavity” on a threat – without fail. Honestly, that’s not me. I would call myself an able long gun shooter, capable of improving – but the skill of a sniper is a very perishable skill that must be honed frequently with the hope it’s never called on. 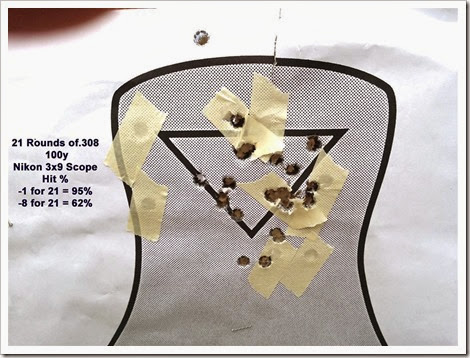 That said, it doesn’t mean I would hesitate to measure myself against such a task. MY result? Out of 21 rounds, if I count any hit within the outline of the head, my ‘Hit Rate” was 95%. If I step up to a higher level – and focus on the ocular cavity – my “Hit Rate” drops to 62%. Would I take the shot if for some reason I was forced to in order to save another – yep, without hesitation. But we’ve discussed head shots before – they are much more complicated that simply putting a round in the threat’s head.

The final measure is simply rounds on the threat – period. If you hit within the outline – it’s a hit. This actually is the spec for organizations from the FBI to the military to define a “hit”. For me, with the .308, the only time I was shooting within the outline was when I was shooting for the head shot. But, if I mix in the “box scores” and the “Hit Rate” for outline I was down 3 for 42 rounds or a “Hit Rate” of 93%. 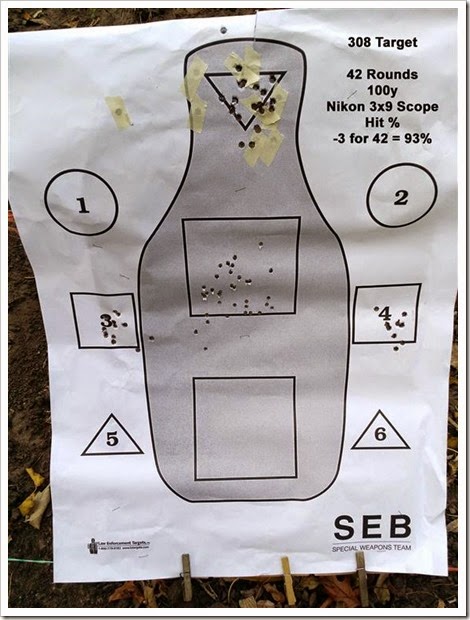 It’s typically at about this point that a “real shooter” starts to pipe up about their skill on the range and how my analysis is all off and his sniper friend could shoot me under the table . . . yadda, yadda, yadda. And that may all be true – I have no problem with a discussion on techniques, scoring, what’s a hit and what isn’t . . . so if you’re tempted to go there – throw up your targets, take some photos, post them somewhere and let’s compare, discuss and learn from each other. Otherwise . . . well there just isn’t much meaning to the discussion otherwise.

From a defensive POV, rolling through this type of analysis of your scoped defensive long gun is only half the discussion – how about your primary defensive carbine? Mine is the Panther Arms Oracle in .223. I have flip-up iron backup sights but my primary sight is the Eotech 517. Honestly, I can’t even see the numbered boxes, circles and triangles around the outline of the target from 100 yards. So, I simply sent 35 rounds down range center mass and an additional 15 rounds for head shots. 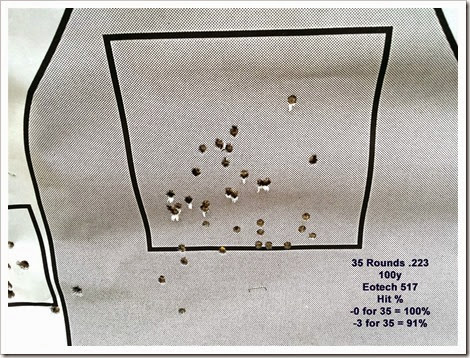 On the center mass hits, there is a 6 inch square box that represents that area where a hit has the best chance of affecting the threats ability to continue the fight. Out of 35 rounds I was down 3 for a “Hit Rate” of 91%. If I broaden it to within the outline, my ‘Hit Rate” is 100%. 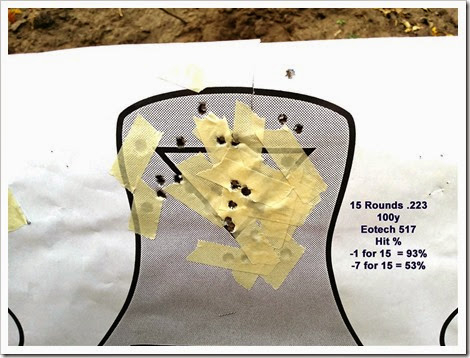 Statistics – you can make them say pretty much anything you want them to say. The same is true with accuracy and how accurate you are as a shooter.

Determine what the course of fire you will be shooting before you go to the range to do your long gun work. Have a plan! And define what “accurate” means. Will you be bench rest shooting or up close and personal? Do one or the other – not both, save the “other” for another range trip.

Don’t change your definition of “accurate” so you get a better “score”. Who the hell cares, own your day – praise yourself for a good day, good target, good shot and work on what you need to . . . work on. And we all have days where everything goes sideways on the range . . .

Document everything. It will catch drift in your sights, drift in your scope, changes in the load of your cartridge . . . a whole host of “little things” that make distance shooting similar to golf . . . it can be very trying on the range . . . yet . . . there ARE days when it all comes together.

Hone your skillset, you may well need it to put food on the table or defend against a threat should the wheels come well and truly off the cart.

So there you have it – now you know what I mean when I say the word “accurate” when talking about shooting my defensive long guns.

Posted by eiaftinfo at 5:15 PM