Today was the final zero on the Ruger Precision 22LR.  I have right at 200 rounds through it, things have remained stable, so I did an initial cold bore shot (about 2 inches high) followed by 4 more rounds on the first target.  As you can see by the photo it was a fairly open group.  I followed with another 5 rounds on target 2.  The group dropped to around ½”.  I adjusted down ¾ MOA and shot two more 5-round groups that held ½” within the center of each target. 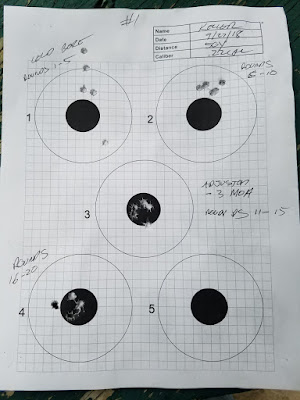 Bottom line, I think this particular rifle is “dialed in” as well as I know how to do it.  From this point on, the accuracy and precision falls squarely on my shoulders and my precision shooting ability.  And that, in deed, is the purpose of range trips going forward with this particular rifle.  It revolves around all the fundamentals – mounting the rifle to my shoulder, use of a rear shooting bag, use of a bipod, clearly placing the scope reticle on the target, working on my grip and making sure it doesn’t affect the POA, working on placing my cheek on the comb and again making sure it doesn’t affect the POA, placing my finger on the trigger, a smooth trigger press straight to the rear and running the bolt smoothly so as to not greatly affect the sight picture.  It’s always the “details” . . . the small things that make the difference in your final result.

Past that, how do you evaluate that “final result” . . . your ability to shoot accurately and precisely.  For the zeroing process that this range trip began with, a traditional bullseye styled target served sell.  But, past that, there is a broad range of different types of targets available – from steel to paper.  Today I ran across a simple 23 round test of accuracy and precision that is contained on a single 8 ½ by 11 sheet of paper. 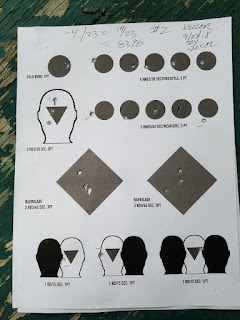 The very first dot is a “cold bore” shot.  Virtually every rifle’s POI will change as a barrel heats up.  It’s important that you, the shooter, know how your specific rifle shoots for its cold bore shot.  One thing I noticed here is that it’s first 5 rounds are much more scattered that I would really expect.  That said, after that it settles right down.  Once I completed its final zero I moved on to the above precision shooting target.  It’s designed to be used at 100 yards but with the RP22LR, I used our 50-yard range.  The cold bore shot was followed by 10 dots, I shot all 10 strong side.  Next was a 3 round headshot and then two boxes, 3 rounds each.  Final, 3 hostage shots.  I dropped 4 of the 23 for an 83%.  I’ll take it for a first pass.


So what should your targets help you with?  I believe they should be appropriate to what you are working on.  For me, I view my long guns as part of my defensive capabilities.  This new target fills a broad range of “squares” – from allowing me to see how my rifle acts for its cold bore shot, how accurately I can hit my target, how well I can execute a head shot, how accurately I can engage a target quickly and finally, how I can execute a hostage shot.  All in all, this target does a pretty good job of allowing me to evaluate a fairly broad range of skills.


In under all of this is also the value of simply spending time on the range with one of my firearms.  To be able to “run the gun”, time on the range is a must.  I’ve said this a number of times but let me repeat it one more time.  For those firearms you intend to depend on to defend yourself and your family – from carry gun to “patrol rifle” to precision rifle – buy 1,000 rounds for each in January and then spend 100 rounds every month to keep up your skill set.  This would be between 3-4 hours per month working with your firearms.  That’s enough to maintain a skillset.  I view it as a minimum.


Bottom line . . . grab your gun, hit the range, have fun and learn something!