We all get introduced to “standards” at an early age.  Standards of behavior by our parents.  Standards of performance by our teachers.  “Grades” that must be met to “pass”.   In the shooting community whether military, law enforcement, competition or civilian the word “qualify” pops its head up.  All of these systems come into to play . . . to see if me meet the “standards” . . . are we Close Enough . . . so that an individual or organization monitoring our performance looks us in the eye and say . . . you “made it”.

Standard:     something established by authority, custom, or general consent as a model or example


something set up and established by authority as a rule for the measure of quantity, weight, extent, value, or quality


I’ve touched on this a few times in the past.  But it resurfaced for me again last week when I visited a local indoor range for a little lead therapy.  My intent was to shake off some of the winter rust.  I have not done any real range work since the end of November so the first task is to just do some evaluation on where my skill set stands.  I continually preach to my students that shooting is a perishable skill and the fact I act as an instructor doesn’t grant me any special dispensation.  I spent time at four different distances.  I began at 7 yards, moved to 5 yards, then 10 yards and finally 50 feet.  The first three distances were covered on my first target and the 50 foot distance on the second.  So let’s drill down a bit.

My minimum “standard” is 80%.  When deciding on that number you also need to define the target.  For my purposes on target one, the targets are individual shapes and areas on the SEB target.  The “high center mass” box was the first target of interest.  50 rounds at 7 yards from the high compressed ready, slow fire.  I varied between single round engagements to accelerated pairs to slow strings of 3 to 5 at 1 second increments.  I loaded my magazines with 10 rounds each working with two range magazines and pausing to reload at the appropriate times.  My result, I put 49 out of 50 rounds within the “high center mass” box, a hit rate of 98%.  Notice that the group is fairly well distributed in the box that implies a reasonable balance of speed and precision.  I’ll take it. 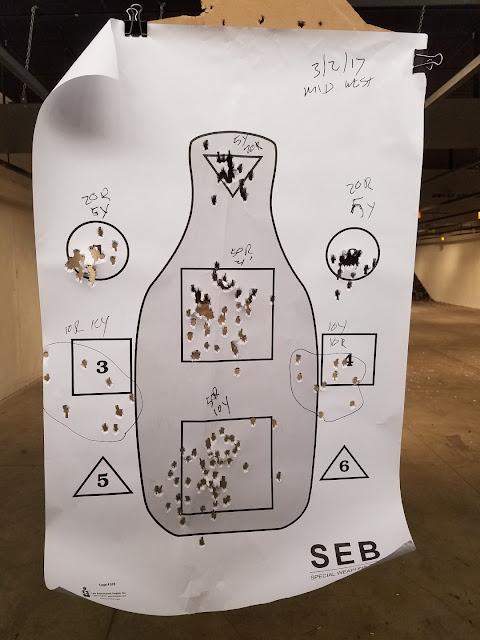 Next was to move to smaller sized targets to increase the requirement for precision.  The circle on the right size was target 2.  I engaged is with 20 rounds of slow fire at 5 yards being careful to practice those things that help insure an accurate shot . . . a solid stance, firm grip, good sight alignment and sight picture, take up the slack in the trigger and finish with a smooth trigger press.  The result?  I was down two yielding a 90%.  I moved to the Ocular Cavity with another 20 rounds, same distance and ending up dropping 4 rounds yielding an 80%.  A squeaker.  Finally, a final 20 rounds at 5 yards on the circle on the left dropping zero and a 100% hit rate.


Next I moved the target out to 10 yards and engaged the Pelvic Girdle with 50 rounds.  Here things opened up a bit and I dropped 8 rounds with a score of 84%.  Finally, I moved to two more precise targets - the 4-box and 3-box – engaging each with 10 rounds.  Obviously here things degraded quite a bit with a 50% on the 3-box and a 30% on the 4-box.  These scores certainly show that I need to work on precision at longer distances.  This took around 45 minutes to an hour complete my evaluation of the depth of the “rust” that had accumulated over the winter.


Next, I posted another target and sent it out to 50 feet.  I slow fired 50 rounds from the high compressed ready and evaluated my results.  Here I want to point out a couple different “standards”.  If you shoot a military or law enforcement course of fire with 50 rounds an hit is any hole within the silhouette.  If we take that standard I dropped 1 rounds for a score of 98%. 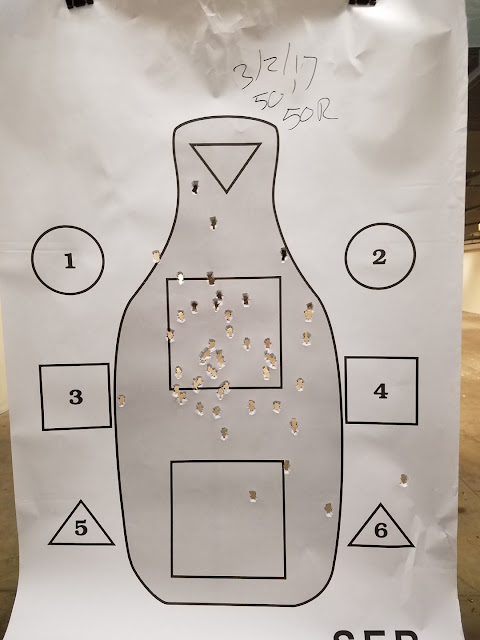 A second standard would be using the high center chest box as the target.  If I use that standard I shot a 60%.   Regardless of which standard you choose . . . you eventually reach a point where you are “close enough” to meet the “standard” of the instructor/RO/shooting wizard in charge of the drill being shot . . . or you’re not.


What prompted this particular post is that a friend replied to my post on my FB where I posted my targets and commented that I obviously had work to do this season.  His question was:   “Where you aiming at the target... cuz it looks look you hit the target. Congrats!”   Where I was aiming had an effect on my overall accuracy.  His “standard” was obviously different than mine.  Bottom line we both get to the same place, a consistent way of evaluating my shooting.  But when you drill down a bit, specific courses of fire vary and can be evaluated separately.


Bottom, bottom, bottom line . . . set your own standard when you do your individual training on your monthly range visits.  Document your trip.  Detail what your course of fire was – distance, number of rounds, specific target area.  And then, hold yourself accountable for your result so you know which specific areas you need to work on.  Remember to use your full range of tools to document and evaluate your trip.  Photograph your target.  Save that photo to your documentation file on your computer that proves you are diligent in practicing your craft.  Consider using your video camera on your phone to evaluate your draw stroke, how you move off the “x”, your reloads, how you drive out to the target.


Shooting is a perishable skill.  If you choose not to visit the range . . . your scores are going to diminish, simple as that.  Set a standard, hit the range and get some good work done.
Posted by eiaftinfo at 12:59 PM