One of the scenarios I use in my Defensive Pistol Course is “the Wal-Mart Parking Lot”. I don’t mean to pick on Wal-Mart – nor do I mean to imply that their security is worse than anyone else or that they are dangerous places. What I do mean to imply is that such places are rich with prey for a predator intent on an easy victim.

Such parking lots provide a broad range of opportunities to stalk a victim, to conceal their approach and to provide a moment when a predator can attack quickly and easily . . . .

During an attack like this, distance equal time. The more the distance between you and the predator, the greater the chance you go home that evening. The closer the distance, the closer you are to a Ziploc. Really, it’s that simple. In an earlier post I linked to, what appears to be, the source for the “21 feet – 2-seconds” rule of thumb. If the predator is within 21 feet, you have two seconds to respond to defend yourself. Can you Draw-Aim-Fire in that amount of time? What can you do, as the “prey” to either shave time from your D.A.F. response? Set’s chat about that a bit.

Obviously, you very first choice would be to not find yourself under such an attack. Beef up your “scan and assess” process, pay attention, park close to the doors, park in well light areas, go when the store is busy and during the day if possible. Listen to your gut . . . . if something feels off, IT IS!! Return to the store, walk towards other people, put your hand on your weapon . . . . MOVE, DO SOMETHING, GET OFF THE DIME, THE “X”, YOUR ASS. Choice, movement, action will force a predator to react, adjust, reacquire and decide whether to continue the stalk and attack or to take a pass for today.

All that said, and despite your best efforts – you may well find yourself in the “Red Zone” with no choice but to fight. Now we are within the 2-second window. How do you gain time (now measured in tenths of seconds) to execute your D.A.F. response?

Movement: ACT FIRST!!! CHOOSE, MOVE, GET OFF THE “X”. Your best directions are at a 45 degree angle away from the predator, NOT straight back. Why? To shoot you while you are moving straight back simply meant they need to lower their weapon a tad while you retreat – no big deal.

If you back-peddle away you are moving while being completely blind (even though your kids are sure you have eyes in the back of your head). You can easily trip, loose your balance and end up on your ass – prey for the feast.

Moving at an angle forces the predator to continually change their sight picture. It allows you to use some peripheral vision to see where you are going. And it is much easier to be sure footed while moving at an angle than running backwards.

Draw: I did a whole post on “The Draw” awhile back. The biggest thing you can do to shave tenths off here is to dry fire, dry fire, dry fire . . . . Train as you would fight – if it’s winter, your practice should be in your typical winter gear. Shed the gloves, grasp and clear, draw and rotate . . . . .

You have practiced your draw – dressed appropriately – and worked out all the kinks. Shedding gloves, solid grasp and clear, smooth draw, good holster, good holster placement (or other method of carry – purse, carry pocket in your coat). This training, this muscle memory has the opportunity to buy you a couple more tenths of seconds.

Let’s look at aiming for a bit.

Traditional Aiming – Sight Alignment, Sight Picture: Here too, I have offered my thoughts on Sight Alignment and Sight picture in a post. It’s not rocket science – and it hasn’t really changed in the two centuries that accurate firearms have been available. It has ALL been said. I am confident that you have spent hours on the range working on two items as well. We all have. They are tremendously valuable. They can save your life.

They can cause you to lose it as well.

Some cautions: I’m going to explore “Focal Point Shooting”. “Point Shooting” is probably as old as the very first firearms. My first real exposure to modern Point Shooting was when I took the Suarez International Point Shooting Progression course this past April. It did a great deal to marry together many techniques I have been taught over the years. You can read my review of the course HERE.

There are real limits to this type of shooting - while less that optimal for those predators moving in on you when they are beyond 21 feet, within that distance – this skill set is a life saver. And that is how I teach it and how I would encourage you to practice it. My standard distance is 15 feet. It is for close quarter combat – not long distance, aimed fire.

In the late 30s there was an unlikely duo working the streets of Shanghai, China - W.E. Fairbairn and E.A. Sykes. During their time together they engaged in the neighborhood of 600 gunfights at various distances – from up-close and personal to engagements of longer distances. They trained local police forces, made recommendations of weapons as well as shooting ranges and the types of targets that should be used. As WWII grew they went their separate ways but each undertook the training of various special operations groups for the allied forces in the use of the handgun as an effective defensive and offensive weapon. Their thoughts were captured in a book they penned entitled “Shooting to Live”. It’s a short, concise and very clear text on close quarter combat with a handgun. Buy it – read it – you will find it well worth your time.

For the purposes of this post, with a predator within the 15 foot range . . . there are three methods of engagement that are well worth talking about, practicing on the range and incorporating in your toolkit of close quarter combat: “Close Hip”, “Half Hip” and “Three Quarter Hip”.

While it’s not a perfect photo of the position, this is the “Close Hip” position: 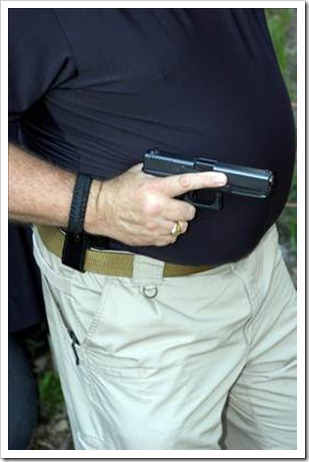 The one fault with this image is that obviously the weapon is NOT parallel with the ground. That said, it is a good illustration of “Close Hip”. Your garment has been cleared, your weapon drawn, your elbow locked and driven DOWN – rotating your weapon to a position parallel to the ground. Your forearm is tucked firmly into your side. Your weapon is snugged into your body. This position offer many benefits in a CQC situation. The first is speed. With your Focal Point on the center mass of the predator, your body indexed on the predator – at the 15 foot distance you can engage your predator fully confident that you will be able to get a combat effective hit that will either stop the threat, change their mind or, at the very least, buy you enough time to press off additional rounds and their approach continues.

This is also a position that provides good retention of your weapon against a predator that may see an advantage is taking your weapon to use it against you.

If you have the luxury of time (threat still within 15 feet) you may begin extending your weapon towards the threat to increase accuracy and to move towards a two-handed shooting grip. 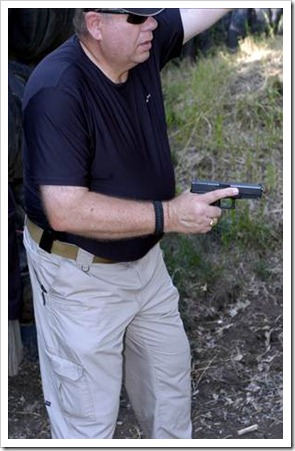 Notice in this position that my support arm is up in a defensive position, my weapon has been extended toward the threat, parallel to the ground. It is still in a position to press off additional rounds, I can begin to see it in my peripheral vision so indexing becomes more accurate and I can make additional combat effective hits in an attempt to terminate the attack.

Fairbairen-Sykes determined that the Three Quarter Hip was the most common position of engagement for the majority of their gunfights. 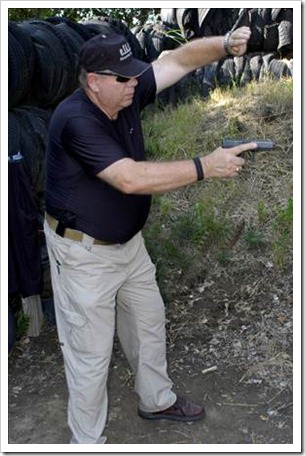 Again, my support arm is up in a defensive position, though my weapon is not nearly fully extended, it is quite easy to use the top of the slide to index on the threat making combat effective hits a much easier task. A caution though – as you move from Close Hip, to Half Hip to Three Quarter Hip – retention becomes more and more of an issue. PAY ATTENTION!! Your weapon should be pried from your dead, still warm hands – not handed over as a gift.

By incorporating these three shooting positions into your tool kit you provide yourself the ability to get the first hit in this age old dual between predator and prey. With a day’s instruction on the range, virtually all the folks were able to make solid, combat effective hits in the two second range. They trimmed many tenths of seconds off their engagement time when they set aside the standard two-handed, sight alignment, sight picture shot and worked on the Fairbairn-Sykes positions.

I would encourage you to work with this method, try it out, consider the Suarez Point Shooting Progression course to refine it – Roger Phelps does a great job!