Training - Brushing off the Rust

For those of us in the northern half of the US – in my case east central Iowa – the weather has started to warm.  Spring is late this year to be honest, with significant snowfall well into April.  And while I do my best, trips to the range diminish with the onset of temps in, and below, the single digits.  So, it’s time to brush the rust off and see where I am at the beginning of this year’s shooting and training season.


What I want to chat about is the “what” and a suggestion of “how” your rust brushing should be done.  Yes. . . I know everyone has their opinion, this is simply mine.


First things first – does your gun RUN?  What I mean by “gun” is your daily carry gun.  The one that, as you read this post, rests snuggly on your hip or at your 1 o’clock in a AIWB holster.  What I mean by “RUN” is that it should complete your entire drill set error free.  The course of fire you choose should wring this out and include multiple magazine changes as well.


Is your draw smooth and sure?  Our past winter was particularly chilly so a multi-layer system for me was common.  My draw stroke with an IWB holster under a Henley, under a Columbia cold weather system, with gloves on . . . takes a bit longer.  Not orders of magnitude longer . . . but longer.  On this range trip I was back to a single, untucked shirt.  Much better!  The process of smoothing things out revolves around multiple draws from the holster.  So, your course of fire should encourage just that – a sizable number of draws prior to engagement.


Marksmanship is in the mix as well.  Can you hit the threat or accurately place a precise shot?  Can you shoot a qualifying score – in my case not less than an 80%.  Of course, this means you need to define scoring before your first shot and not “adjust” things to make yourself feel better.  In my case I’m using my target of choice – the LETargets SEB target.  A good hit is within the High Center Mass box, Pelvic Girdle box, within the precision shapes or the Ocular cavity.  Within means within or touching the shape.  What is does not mean is – “anything within the silhouette is a hit”. 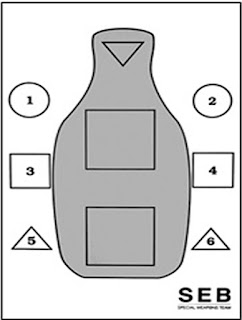 Next is round count.  How many rounds can be used to effectively evaluate where the heck you are shooting wise?  I have three training magazines.  My approach was to put 15 rounds in each magazine for a total of 45 rounds for each of three distances – a total of 135 rounds.  This also insured 9 magazine changes.


The first magazine was a single round engagement, high center mass for each draw.


·        The final draw was a single round engagement on the Ocular Cavity.


This process was repeated for stage 2 at 10 yards.  And, it was varied at stage three at 15 yards in that I scored the High Center Mass and Pelvic Girdle boxes separate from the precise shots.  The reasoning for this I that I considered it imperative that I “pass” on the boxes and see it as less than realistic to shoot an 80% on 7 different boxes that are 3 ½”-ish at 15 yards.  Again, the parameters are mine, you may well choose a higher expectation of yourself.


Once I had this defined, I shot the course of fire from three different targets at three different distances.  As I am wont to do, I took photos of each target.  HOWEVER – pro tip – check to make sure your images are actually recorded!  Sadly, I did not and I must not have been diligent in pressing the button on the screen firmly or whatever was needed.  The only target actually photographed was the one at 10y.  And, of course I had applied one target over the other.  Heavy sigh.  But, I did go back and take a photo of the summary at the top of each target for inclusion in this post.


There was one other change for the day that played in this process – the previous week  I had driven to Brownells and purchased a Wilson Combat Match Grade Barrel for my carry Glock 17.  I had run around 60 rounds through it previously, but this was it’s first go to evaluate reliability and accuracy in my weapon.  The obvious concern is that with much tighter tolerances, would there be problems with the gun not running as smoothly as I am used to.  The answer . . . it ran just fine, no feeding problems or ejection issues at all. 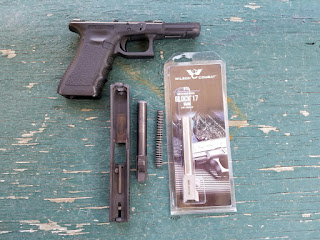 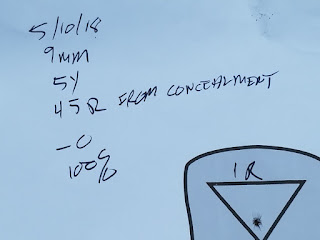 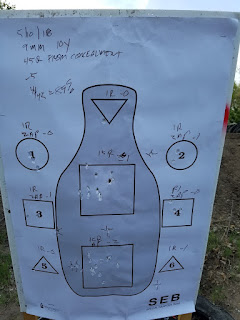 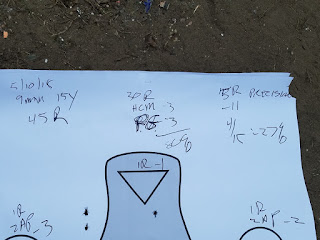 So, if I did the math right for each distance there were three magazines, 45 rounds and 34 draws from concealment for a grand total of 135 round and 102 draws.  More than enough, IMNSHO, to brush off the rust and get me headed in the right direction.


Take some time, plan your first big range trip of the season, evaluate your skill set and see where your starting point is for this year.  Then post your approach and your result.  We can all learn from each other!