When you talk about a true “Survival Rifle” you enter an entirely different realm. These are weapons of last resort – never really meant to be used but, when they are required, they must be 100% reliable. This implies a number of characteristics that set them apart from a “standard” TSHTF weapon.

One of the icons of this class of weapon is the Springfield Armory M6 Scout Survival Rifle. 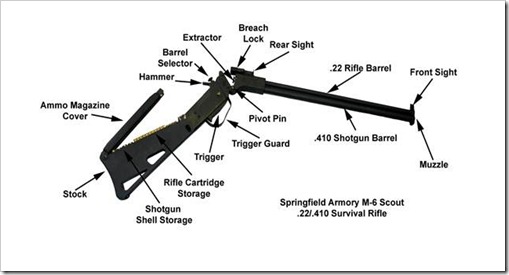 The M6 was a standard component of survival kits for Air Force aircrews beginning in the 1950s through the early 1970s. It is a beast. Weighing in at nearly 5 pounds, it is 34 inches long when assembled. The upper barrel is either chambered for a .22LR or a .22 Hornet round. The lower barrel is chambered for a .410 shotgun shell.

The hammer is manually cocked, the barrel is manually selected and an oversized trigger accommodates easy firing – even with a gloved hand.

An ammo magazine built into the stock, and secured by a locking cover, holds an emergency supply of .410 shells and .22 cartridges.

If you are looking for a last-ditch survival weapon, the M6 should be at the top of your list!

The Rifle Barrel is the component that allows the bullet to exit the carbine after it is fired and adds a spin to the bullet to increase its accuracy. The Shotgun Barrel channels and patterns the shot expelled from the .410 shotgun shells.

The Front Sight, used in conjunction with the Rear Sight is used to acquire an accurate sight picture prior to engaging a threat or taking game.

The Hammer is manually cocked, preparing the weapon to fire. The Barrel Selector is used to select which barrel will be fired when the Trigger is pressed.

The Ejector removes the spent cartridges when the Breach Lock is lifted and the weapon is broken open. The Pivot Pin is used to assemble the Stock Group and Barrel Group into a full sized weapon. These may be disassembled for easy storage in your survival kit.

This is a highly accurate weapon allowing the shooting of small game to 50 yards and beyond. As a defensive weapon, while better than nothing, its slow rate of fire would make it a less than optimal weapon. However, it would make sense to include a couple .410 slug rounds as part of the Ammo Magazine’s cache of ammunition.

These weapons have a long, proud history and are well worth adding to any survival kit.