Training guns . . . they are a part of every learning process.  For the last little while – past 4 years or so – I’ve been working on becoming a better precision shooter.  When I say those words what I mean is that I can put a solid group (precision) where I want them to go (accuracy).  I’ve discussed that process in an earlier post you can read HERE.


My rifle of choice for Precision Rifle Shooting is the Ruger Precision Rifle in .308.  Match grade ammunition runs around $1.50 per round so each 50-100 round practice trip runs from $75 to $150 with store bought ammunition.  Obviously reloading enters the picture here . . . but until I’m satisfied with my efforts . . . shooting with quality ammunition is expensive. 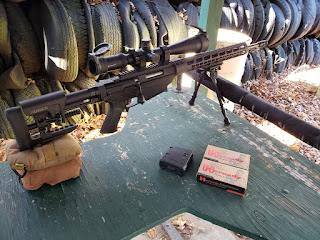 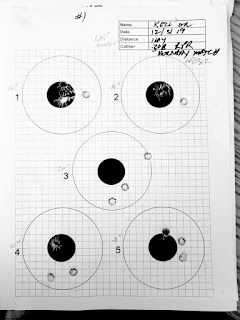 
My first choice here is the Ruger Precision Rifle in .22 Long Rifle.  This is a dream to shoot and reasonable good match ammunition is available for about $75 for 500 rounds.  A significant difference.  I’ve chatted about this rifle and my search for good ammunition on my blog as well.  On a 50 yard range I can frequently shoot 1 MOA and below.  This allows me to work on all the fundamentals without spending a crap ton on ammunition.  That said, there is something said for working with a rifle that also allows some work on recoil mitigation and that will reliably reach out to 100 yards or more. 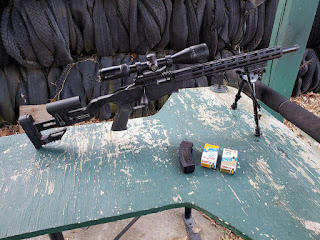 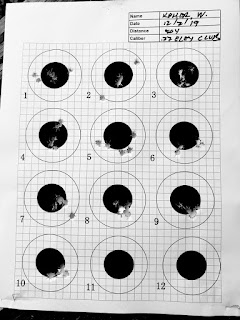 
I have a backup rifle for my Patrol Rifle that I take to coursework in case my primary takes a crap.  So, I put a moderately priced Nikon Prostaff 5 scope on it, upgraded the trigger, added a bipod and a couple 10-round magazines and presto-change-o . . . training rifle!   MMMmmmm . . . not so much.  As you can see, even with higher quality Frontier .223 with match grade bullets, my groups just plain sucked.  So . . . time to look for a “real” rifle. 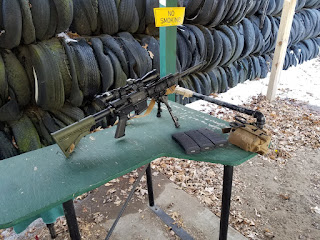 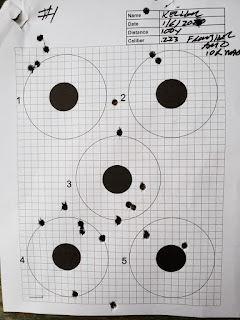 I had a couple requirements.  It couldn’t break the bank.  I’m sure for a couple grand I could find a hell of a shooter . . . but . . . “couple grand”.  That said, I wanted a rifle that could consistently shoot a 1 MOA group at 100 yards.  That is the length of the range I have full access to and where I spend most of my time working on foundational shooting.  Let the internet search begin!  While I found a number of rifles that met my requirements, I finally settled on the Ruger American Rifle – Predator in .223.  To be honest, the deciding factor was that there was one in stock at a local Sheels store for $469 . . . and I could pick it up at lunch time.  But, after the first 100 rounds or so I gotta say I’m pretty darn happy with the purchase.


I picked up my son, had a quick lunch and headed to Sheels to claim my rifle.  After the usual paperwork (in Iowa carry permits expedite things to the point I could walk out with my rifle at the time of purchase) I dropped him at his house and headed back home and to my office.  Here I quickly transferred the scope to the Predator mounting it with a pair of Leupold scope rings.  As a reminder, make sure the bottom of the rings are pushed forward in the notch of the rail before you torque them down to the recommended levels.  And, leave the top rings loose until you get the eye relief how you want it before you torque the top of the ring screws down to the recommended levels as well.  I did not lap the rings, I’ll see how things go long term.  Honestly, I was just plain impatient to hit the range to see how this fellow shot.  I did a function check, ran a few patches through the bore and grabbed a couple boxes of PMC 55gr ball ammunition.  By the time I got to the range I had an hour and a half of daylight left.  The good news . . . it was 57 degrees . . . on January 9th . . . at 4PM in the afternoon!!! 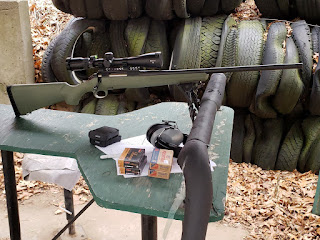 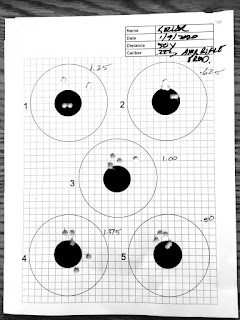 The 100-yard day came the following day, January 10th.  The day was a bit more “seasonal”, reaching a high of 29 degrees.  But otherwise it was a very nice day for shooting.  Before getting to the range I hit the local gun store for some better-quality ammunition – Frontier 5.56 loaded with a Hornady 75gr BTHP match bullet.


Given that the Frontier was a bit pricier, I thought I’d wring out the PMC 55gr ball ammunition as well as the Frontier with the 75gr BTHP match bullet.  So I hung two zeroing targets and two targets to shoot for both accuracy and precision.  As you can see from the zeroing targets (with the rotated 3 ½-inch squares) its performance was poor and that followed through to the 5 separate 3 inch targets.  Accuracy was crap as was precision.  I was praying that this was NOT a sign of things to come with the Frontier ammunition. 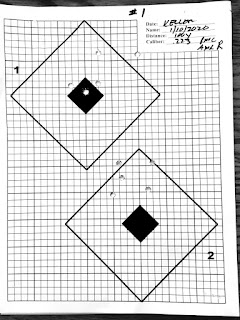 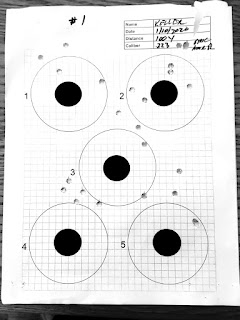 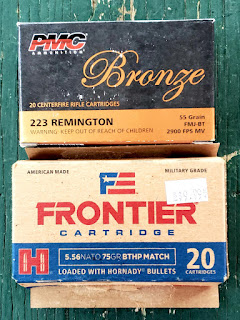 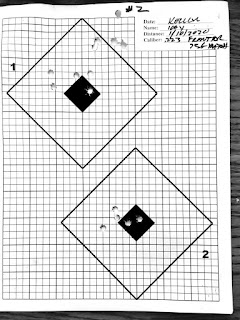 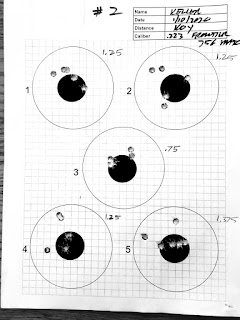 As you can see the first zero group was high and right.  I dialed down and left and shot a second group on target #1 – much better.  I then shot a final group on target #2 – I was happy with that measuring around .5” in height and 1.25” in width.  On to the 25- round evaluation.  As you can see from the 5 targets, accuracy and precision was MUCH better with an average group size of 1.175.  I gotta say I was much happier with the performance of the Frontier ammunition and it would seem I have exactly what I was looking for – a .223 rifle that is consistently capable of a 1 MOA group at 100 yards.  I’m pretty darn early in this “relationship” but after my first focused range trip, I’m encouraged with the performance of this $469 rifle.


Some over all thoughts.  The value of the purchase is exceptional.   It’s a well-made firearm, has a heavier barrel and I saw no real loss of performance while attempting to run a total of 100 rounds through it in a couple hours. The stock has a nice “feel” to it and provides for an easy and firm grip.  The butt plate is fairly soft and provides for quite a bit of recoil mitigation – not that there is much recoil to begin with. I will be adding a riser pad to the comb of the stock to help with consistent placement of the rifle to my cheek.  For this trip I simply laid a couple leather gloves over the comb to act as a riser.  As an aside – I had 7 failure to fire rounds with the Frontier ammunition.  The failed rounds have been passed on to the supplier but, that number of failures over 50 rounds is disappointing.  While the bolt was a bit stiff at the beginning it smoothed out considerably over the range trip.  I suspect that will continue to improve.  The trigger broke right at 3 pounds and seemed consistent over the range trip.  This matches with both the 22LR and the .308 precision rifles from Ruger allowing a consistent trigger press across the three platforms.


All in all, I’m more than happy with my purchase of the Ruger American Rifle – Predator in .223.  If you are looking for a good training rifle that doesn't blow a hole in your wallet, I would suggest you t ake a look at the Predator.

Posted by eiaftinfo at 3:04 PM