The date is July 11, 2011, around 05:10. I am at the very edge of consciousness, just prior to my internal body clock’s “GET THE HELL UP” alarm. Susie is still fully zonked from her mid-shift at the hospital, only been asleep for about 4 hours and the cat is curled at the corner of the bed. All is well with our early-morning world.

A whisper of a wind begins . . . . and becomes a rage!! In mere seconds the sound of snapping limbs and tree trunks shatters our morning. For only the 2nd or 3rd time we take refuge in our basement. This is prime tornado country, Iowa posts over 100 every year. In 30 years we’ve never been hit full on – ever. Close – yes. I actually drove under one once in one of their rain squalls – yet never a hit.

We gingerly climbed upstairs fully expecting to see roof or windows or doors missing – they were not. I quick peek outside showed most of our trees were missing or heavily damaged. Power was out – not a good sign for a 100+ forecast for the day, yet we were safe and secure. We headed back to bed. 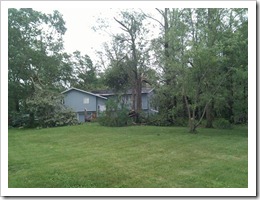 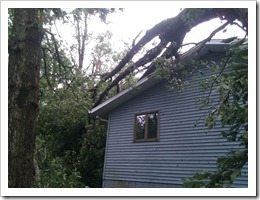 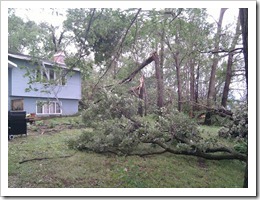 About 5 minutes later there’s a knock at the front door – our neighbors Dan and Brie (still in boxers and jammies) with a terribly concerned look on his face. “Are you two ok?” – the firefighter / EMT in his voice coming through loud and clear. We assured him we were – then we ask in return how they had faired. They were devastated – roof gone, large machine shed (50x80) a shambles in our woodlot. Still, no injuries. 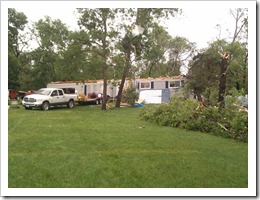 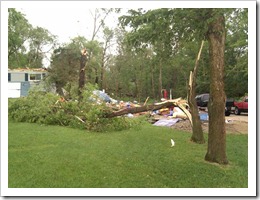 We are completely “tree locked” a couple hundred trees from the woodlot we all live in now block the roads. In our small community 3 miles away 70% of all trees now cover homes, yards and roads. Power is out for 10s of miles around. Grain bins that will store the 100,000s of bushels of corn and beans of the coming harvest are simply twisted metal. All major roads entering our small community are blocked by down power lines, farm equipment and destroyed buildings that are scattered around – travel is simply locked down.

It is at this point that you realize fully and completely – “Big Systems” Fail.

In this context “Big Systems” mean State and Federal Systems. They simply cannot marshal forces quickly enough to respond in any meaningful manner. For us, within an hour those of us in our woodlot who had chainsaws (read EVERYONE here) and a neighbor farmer with tractors half the size of my home simply attacked the problems. Roads were cleared (yes, county roads), driveways, trees were lifted from houses, our neighbors belongings were loaded into trailers loaned by friends and moved when possible . . . . and while the “Big Systems” were struggling to get up to speed – the “Little Systems” of friends and neighbors set about the job of real recovery . . . .

It took just over a week for power to be restored.  Dan and Brie moved into their new home 13 months later.  The replacement of our roof was completed 5 months after the storm.  Final recover of our community?  It will take generation to grow the thousands of beautiful Maple trees that lined our streets.  Recover is a work in progress – even after 18 months.

Fast Forward to yesterday - a breakfast after Mass and I’m sitting next to Ross, a onetime/shortime boyfriend of my daughter’s many years ago. She fixed him up with his now-wife, Crystal. They are surrounded by 3 pretty darn active kids. He works for the local power/gas company and had just returned from 2-weeks on Long Island – helping his “neighbors”. That’s just how Iowan’s think – you’re in trouble?? We’re on the way!!

I ask him how his trip was. “I’m glad I live in Iowa!!!” comes the response. And I listen to stories of mismanagement, dangerous short cuts, residents throwing debris and rotten food at utility workers as they do their best to help these folks out. He speaks in wonderment of piles of rubble that needs to be moved and people sitting around, staring at it, waiting for “the government” to come and fix it.

He looks me in the eye – a mix of sadness, disbelief, anger shows through – and says “Bill, it isn’t coming!”

“Big Systems” Fail – it is their nature. They are not designed to respond or manage the micro-issues; clean your driveway, pull the limbs off your home, scoop out the water, fix the windows . . . . that is best handled by the folks in the midst of the debris. That’s what shovels, rakes, wheelbarrows, chainsaws, axes, handsaws – just good old basic tools – are for. And, human muscle, human sweat, human effort, human work.

Yet, while the failure of “Big Systems” is easily seen and “explained” , it is seldom “fixed” . . . .  but it’s the stories of the failure of “Little Systems” – the people/community/groups of friends that is most disheartening to me.

From a personal defense POV, I teach the folks that come to my classes HELP IS NOT COMING!!!! YOU ARE THE ANSWER, YOU ARE YOUR ONLY DEFENDER!!! And so it is in the aftermath of Sandy. When a person looks in the mirror – they see the only person who is going to help them.

If we have truly lost the individual desire to be responsible for ourselves, to help ourselves, to dig our way out of disasters like Sandy . . . . if we have truly become a society of “the government will help me” and then we throw rotten food and trash at the folks that show up to lend a hand . . . . we are a lost nation.

“Big Systems” Fail – each and every day is minor and spectacular (Sandy, Katrina) ways.

You are a “Little System” – you can guard against total and complete societal  failure  –  you are our last defense . . . .