You never know how a course in January in Iowa is going to be received.  It’s cold, the weather is unpredictable – it takes real effort to attend.  You have to “want” to be there.  Still, I posted the course in December of 2012 and waited to see what would happen . . . . . 16 folks signed up!  Second largest class ever!  And, while it turned out that one couldn’t make it, the remaining 15 did a great job!!

I’m always interested in why they come . . . what is going on in their life that makes them want to attend a Basic Pistol course.  Well over half saw it as the beginning of learning enough about handguns to use them for personal protection – it is the start of their journey, not the end.  Some considered themselves “shooters” but had never had any formal training at all and they too saw this as a starting point.  One couple came because folks in their church had introduced them to handguns. They had enjoyed that experience on the range, and were looking to learn more.  And, I had four scout leaders that I have worked with over the past 2 years helping their troop with their rifle and shotgun merit badges.  We had chatted about the Basic Pistol course in the past and they decided to make time to take it.

All in all, they were at the course for the “right” reasons, had great attitudes and really jumped in.

The second thing I really enjoyed about this bunch was their absolute willingness to ask questions, make comments, share experiences . . . . honestly, that’s not typical.  Usually I end up drawing conversation out of folks by asking them the questions – that was not the case with this group!  Very fun and, that involvement builds a better learning environment! 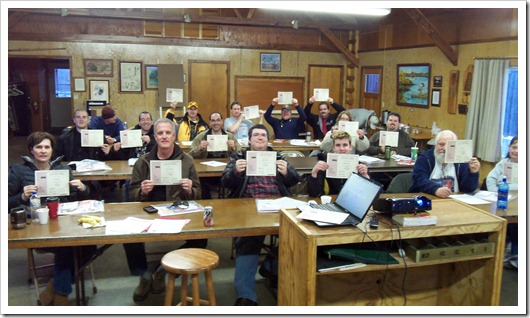 And, icing on the cake, about half asked when my next classes were!!  Nice!

Let’s give them a well earned round of applause!!