Just the Basics - Hammers and Strikers

All cartridges fired from handguns, long guns or shotguns are fired by having their primer sharply struck by a firing pin. The mechanics to make this happen have boiled down into two primary configurations – the Hammer Fired or the Striker Fired firearm.

During a recent class, as I was going over this detail, eyes glazed over and I realized I had lost them and had no readily accessible images to explain this difference. I also suspect that if the folks I had in the classroom that day had questions, other folks might as well. So, let’s chat a bit about “Hammers and Strikers”.

Let’s start with one of the earliest and simplest hammer fired weapons, the .45 Single Action Revolver.

The Hammer is found on the rear of the weapon. It has 4 positions:

Fully Forward: The Hammer is fully forward, the Firing Pin if fully in and slightly through the Hammer Port – meaning it rests mere millimeters from the face of the primer of the cartridge that is in the firing position. Perhaps not the safest configuration.

“Safety” Position: The Safety Position in one-click back. In this position, the cylinder is locked, the Nose of the Hammer is withdrawn into the Hammer Port, the Trigger is locked and the firearm is much safer in the event in is dropped. For a modern, single action revolver, this would be the safest way to cary the handgun – with the exception of leaving the firing chamber empty.

Half Cocked: Half Cocked is two clicks back and allows the cylinder to spin freely. This is the Hammer position used to both load and unload the firearm via the Loading Gate.

Fully Cocked: The Hammer is three clicks back and the weapon is fully ready to fire. In this particular SA Revolver – less than a pound of pressure with my trigger press will release the hammer and fire the weapon.

The Firing Pin is Integral to the Hammer meaning that it is a physical part of the hammer. The very end of the Firing Pin – that part that actually strikes the primer is called the Nose. 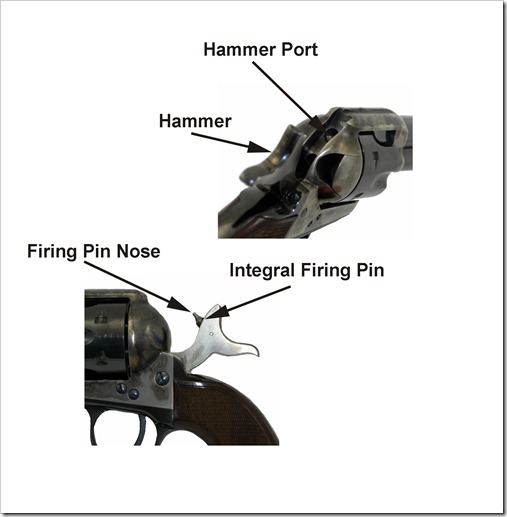 The Single Action revolver evolved into a Double Action Revolver. This meant that by simply pressing the trigger the Hammer was cocked, the cylinder was rotated and finally the Hammer was released – firing the weapon. With this change came some changes in the design of the Firing Pin.

The Firing Pin became part of the frame. The Firing Pin Nose can be seen on the inside of the weapon when the cylinder is rolled open. The rear of the Firing Pin is available to the struck by the Hammer Face. 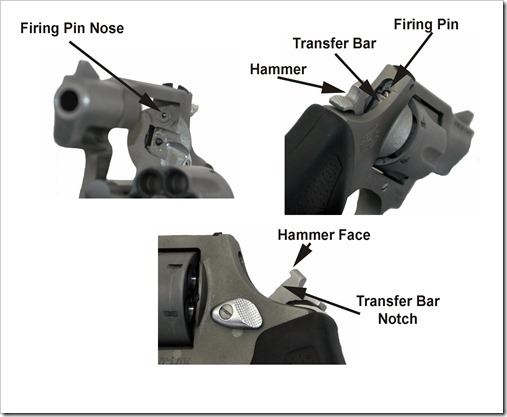 The Extractor rides down the slide along the inner edge to slip behind the lip of the .45cal ACP cartridge. As the slide moves to the rear it extracts the spent casing from the chamber and ejects it out of the side of the weapon through the ejection port.

Note that the Firing Pin is a fairly slender, smallish bit of hardware. This is one of the things that set it apart from a Striker where the Striker is the Firing Pin – as in the Glock 36 pistol shown next. 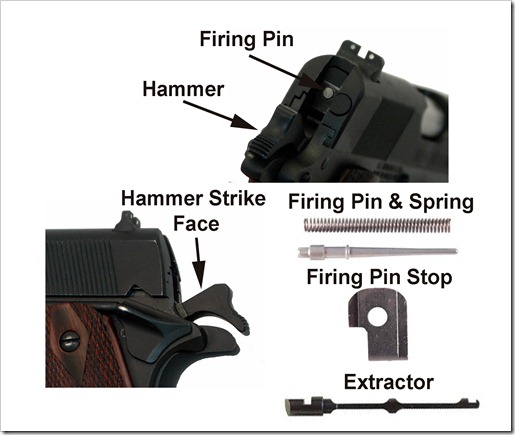 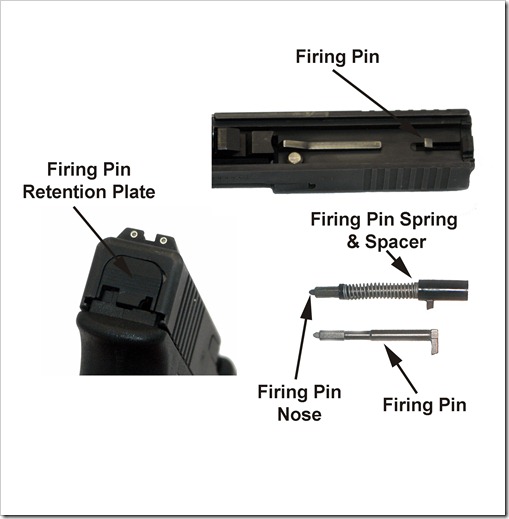 Hammers – Firing Pins – Strikers . . . . they all get us to the same place. They make your firearm go BLAMMMMMM!! Yet, there are important differences.

As in all things – words matter.

Posted by eiaftinfo at 5:20 PM