I have said a number of times in the past – I am NOT a fan of weapon mounted lights. In particular, I have described my preference of having a hand held light when using my handgun in low-light conditions. No need to repeat that discussion here. However . . . . .

Once you move into the long-gun environment, things change. In that environment – you now typically need two hands to handle and control your weapon. Throw in my Surefire 6P Defender and you find yourself wishing you had a third hand. When using either my 870 for my Panther Arm Oracle carbine as a defensive weapon in low-light environments – a weapon mounted light is a handy addition.

For this review, I want to focus on my Remington 870 Tactical Shotgun. You have two options when looking to mount a light - you can replace the Fore-End with a model that has an integrated light. There are advantages to this option, particularly the built-in controls that are easily accessible to your support hand as you handle your weapon. Disadvantage – cost, pure and simple.

A second option is to mount a short piece of picatinny rail to the magazine tube. And, that was my choice – using the Laserlyte Shotgun Tri-Rail system. 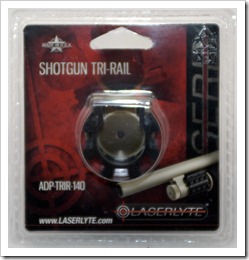 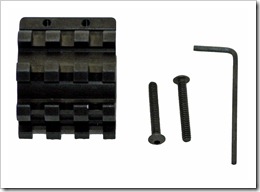 The installation was very simple. I simply removed the forward spacer with the integrated sling point, slid the Tri-Rail on the magazine tube, re-installed the forward spacer and then centered and fixed the Tri-Rail in place with the provided Allen screws and Allen wrench. Total time – under 5 minutes. This provides three points of installation at the 3 o’clock, 6 o’clock and 9 o’clock. 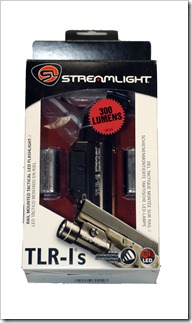 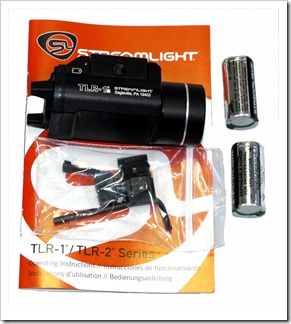 I evaluated a number of different weapons light for this add-on to my 870. The driving factor was the purpose of this particular weapon. This is a CQB weapon, primarily for the defense of my home. I am not going to be taking 25 or 50 yard shots with it. It will be close in, the max distance being the full length of my home or the width of any given room. This allowed me a great deal of flexibility in the size of the light I was looking for.

My choice – the StreamLight TR1s.

It is mounted to the support side of the 870 just forward of the Fore-End stop. I can easily reach the rocker switch with my support hand as it grips the weapon. A simple flick in one direction provides momentary light, the other direction provided continuous light. A double tap in the momentary light direction initiates the strobe function until the switch is released. Honestly, I don’t care for the “double tap” switch approach – it is one more thing to remember in an engagement that – unless you fully integrate it into your training – you will quickly forget.

Operation is simple and instinctive. The area that is illuminated could easily be used as your sighting device provided you are using typical game loads. My preferred load-out is two game rounds followed by a heavier round – either buckshot or a slug. The biggest consideration there is RULE NUMBER 4!!! Most slugs and buckshot will travel through drywall as if it were paper. Keep that in mind! The “two plus one” load out allows me to “change the mind” of an intruder while closing on them so that if a third round is needed, I have much more control of the situation and shot at that time. I realize your approach may well be different – that’s fine. Just make sure you train with that load-out in your weapon.

Another advantage of this light – it can easily switch to either my carbine or my Glock17. It is getting close to an upgrade for both those weapons, so as I work with this light, I’ll evaluate its use on both of those platforms. Right now – today – I suspect I will be picking up a couple more of these, one for the carbine and the Glock17.

As for the level of illumination – let’s chat about that for a bit.

In years gone by the “foot candle” was the preferred unit of measure. How much illumination would be provided on the inner surface of a sphere that is one-foot in radius from a candle at its center. Of course – that would depend on the type of candle, length of the wick, composition of the wax, duration of the burn . . . . scientifically a dicey thing to standardize.

Well – geeks being geeks – they have settled on a new point of illumination – platinum. The nice thing about base metals is that they are “consistent”. An atom of platinum will perform exactly and precisely the same each and every time an specific outside force acts on it. The characteristic that scientists are interested in for the new standard for illumination was the amount of light that was given off at the precise instant a defined amount of platinum melted. The exact amount is “1/60 of a single square centimeter”. This then become the “candle” at the center of the sphere 1m in radius. The illumination provided becomes a lumen.

The final piece of this puzzle is the “steradian” – the area of illumination. To get an idea of what this area is, take your weapon light, stand 3-feet from a white wall, point the light at the wall and look at the area illuminated by the light. This is the “steradian” for that particular light. The number of “Lumens” a light is rated at, determines the “brightness” of the area illuminated by your light at 3-feet. More Lumens – brighter. Less Lumens – dimmer.

Bottom line – I am very impressed by the size, function and amount of light available from the StreamLight TLR-1s. It’s well built, lightweight, uses a “standard” battery and will fit multiple weapons platforms.

If you are looking for a weapons light for either shotgun, carbine or handgun, it is well worth your consideration.