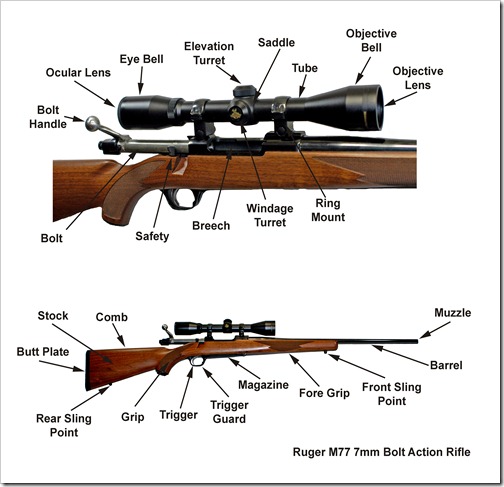 The Breech provides a port for loading the Magazine with fresh cartridges as well as acting as the ejection port while working the Bolt to eject a spent cartridge.

The Safety prevents the Trigger from being pressed to the rear unless it has been released by the shooter. (NOTE: Safeties are mechanical devices and can fail!!!)

This particular configuration of the Ruger M77 incorporates a telescopic site to provide a solid sight picture at extended distances. Like any device, it has a specific set of vocabulary to describe its different components.

The Ocular Lens is that lens group that is closest to the shooter’s eye. The Eye Bell is the housing that contains the Ocular Lens group.

An Object Lens group is contained in the Objective Bell and is at the front end of the scope. A Tube connects the Eye Bell to the Objective Bell. Mounting Rings hold the Tube in place and mount it to the top of the rifle.