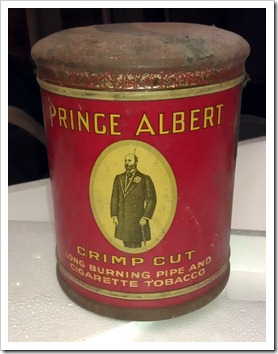 An old joke from my childhood floated through my memory as I moved an old Prince Albert tobacco can filled with my dad’s collection of screws, nails, nuts, bolts and “what-not”. It’s not really been used since the late 40s – a reminder of a man I knew little about, have few memories of and yet feel a fairly close kinship with. I have a trunk of his filled with his childhood toys, pocket knives and watches, union pins for his caps . . . . the remains of his life. He’d be 113 this year had he been granted it . . . . his life lasted just 57years. Still, he left footprints – faint to be sure – yet still visible all these years later.

We are undergoing a slow-motion remodel in our home. Bit by bit, inch by inch, room by room . . . . . on it goes. We are getting to the “big stuff”, yet lots of little details need finishing up first. Today – a “final pass” through belongings that have passed through numerous apartments and homes to end up in boxes in a corner of our garage. Such are the bits and pieces of our life. Weeks ago new insulation was installed, ceilings covered and an area cleaned – making ready for today and the assembly of a new storage system. Once the task was completed, it was time to tackle an old unit filled with long-ago filled boxes with bits and pieces of our path together and our combined families’ history.

A box of religious cards, medallions, prayer books, Mass cards . . . . these represent my wife’s upbringing in the Catholic Church and define her very core. Workbooks from 4th grade covering the parts of Mass as well as math, English, geography. This was followed by weekly magazines for students from the 50s – filled with concerns of atomic war, what to have in your fallout shelter, details of the USSR’s expansion. Sprinkled in were cards from me during our very early years, copies of a High School newspaper we both worked on, old photos . . . . . our “footprints” both separate and together.

There was a yearbook from 1909, school work from her mom from the 1920s, books from her uncle Clearance – a WWI vet that survived mustard gas and TB. Books of WWI, novels to build the spirits of families at home and to let them know what their doughboys were going through.

A couple train sets – one electric that I still see set up on our dining room table and another windup to capture the mind of a young engineer.

Still another box holding the remnants of my first chemistry set, parts of old electronics experiments, a toy wrecker complete with spare tire.

Our foot prints . . . . from our path together. It will be the last time either of us will sort this particular batch of memorabilia. We will leave the next round to our children after we are gone. To peer into these boxes, thumb through the books and photos and prayer cards . . . . to look at our footprints so they know where they have come from . . . .

Posted by eiaftinfo at 5:54 PM