That said, the LaserLyte round has drawbacks. For those using SAO or Safe-AO semiautomatic pistols, you must either incorporate a “slap, rack, shoot” drill at the end of each trigger press for multiple shots, or you must be satisfied with a draw/single shot only drill. There is value in practicing both the clearing drill and a single hit drill . . . . yet you do need to press forward with multiple round engagement drills as well. There is value in taking your training to the “next level”. And, there is a company that provides just such a tool . . . that has a unique name – “NLT – Next Level Training”.

They provide a couple of unique tools to advance your dry fire training: The “Shot Indicating Resetting Trigger” Pistol – “SIRT” for short, and the “SIRT” Carrier Bolt for your favorite AR. This review will focus strictly on the SIRT Pistol; I’ll do a separate review of the SIRT Carrier Bolt down the road.

As an NRA instructor – NLT provides a training package consisting of 3 SIRT pistols. One is their SIRT PRO Training Pistol and the remaining two are their SIRT PERFORMER RR (red/red lasers). For an instructor looking to provide solid training to new shooters on a dry fire range – it’s a great package. 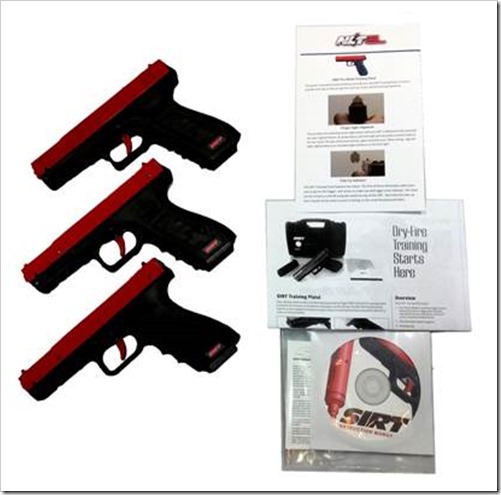 There is also an instruction package and a DVD with copies of the instruction sheets, an installation video for the SIRT Carrier Bolt and a number of beginning instructional videos.

The touch and feel of both pistols emulates the Glock 17/22. It is weighted to simulate a fully loaded pistol. It includes a magazine that ejects when the magazine release is pressed allowing for a full range of speed reload and tactical reload training. Each magazine’s weight can be adjusted to simulate empty/full magazines. The slide does not blowback between each trigger press but honestly that has no effect on the value of the training this pistol provides.

The purpose of the “take-up” laser is to provide you a visible indicating tool as soon as your finger applies pressure to the trigger – and for as long as that pressure is applied. This is a great tool for the new student that desperately wants to put their finger on the trigger before they are fully on target.

Once up on target, you will see the indicating laser at some distance below your point-of-aim (this distance is adjustable). When you press the trigger, you will reach the trigger break and the green “indicating” laser fires. It will remain on until trigger reset occurs and the “take-up” laser will remain on until the trigger is fully released. This combination is a great tool for advanced shooters who want to work on their trigger control and the trigger reset point for faster follow-on shots.

Another diagnostic tool is simply the laser spot itself. That’s exactly what you want to see – a spot – NOT a dash. You can visibly see how your trigger press is affecting your impact point. For those shooters who say things like: “I always hit low/left”, “Why do I always miss to the right?” Now, you have an instant diagnostic tool to see how your trigger press and trigger control are affecting your point of aim.

The SIRT PERFORMER RR provides all these features as well – but the “indicating” laser is red rather that green. There is a significant difference in cost between the green and red lasers and this shows up in a lower cost for the PERFORMER RR pistol. That said, I have not noticed on my indoor range that this affects my training. Outdoors, at distances of 30 feet or more, the green laser of the PRO is definitely easier to see.  You also have the option to turn the “take-up” laser off so that you only see the “indicating” laser.

Does training with a SIRT pistol help??

The SIRT pistols provide you a platform you can use to work on your stance, draw, grip, engagement, trigger press, trigger control, multi-round hits . . . . yep, it helps – a bunch.

I have been working on a training program for new shooters, with the SIRT pistol for about two months. Lots of trigger time, lots of work on IDPA and the LE targets. At the first IDPA shoot I was only 12 points down for the entire 8-stage course of fire. There were shooters with better times and fewer “procedurals” – but out of 30 shooters, there were only two with few points down due to missed shots. The SIRT pistol training helped me quite a bit.

If you are looking for a training tool that will take your dry fire training efforts to the next level . . . . it’s hard to beat NLT – Next Level Training’s SIRT Pro and SIRT PERFORMER training pistols!

Posted by eiaftinfo at 9:20 AM