You’re sitting in a bar having a few “adult beverages” and your buddy asks: “Say, aren’t you one of those “preppers”??

In an earlier time, when our parents or grandparents were taking on a voracious 3rd Reich, there was much more of an understanding that some things are best kept to yourself. As liberty ships and troop carriers ferried supplies between England and the east coast, German Wolf Packs hunted the North Sea freely. Many times the departure dates and times were revealed to covert operatives that frequented the taverns on both sides of the pond. An ad campaign evolved to stress the importance of Operational Security – OPSEC. 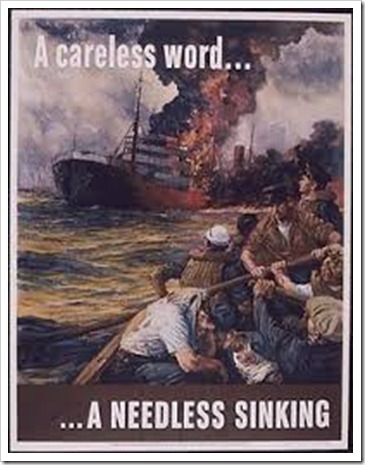 There are a lot of ears available each and every day to listen to our words. In some cases the act of communication is purposeful – as with a friend in the story above. And, many times, that same conversation is unintentionally shared with another set of ears or two that are close enough to hear your words as well.

The process of guarding your communications – be they verbal, written or electronic – is being aware of Operational Security – OPSEC.

OPSEC: A process of identifying critical information and subsequently analyzing friendly actions attendant to military operations and other activities to:

a. identify those actions that can be observed by adversary intelligence systems;

b. determine indicators that hostile intelligence systems might obtain that could be interpreted or pieced together to derive critical information in time to be useful to adversaries;

c. select and execute measures that eliminate or reduce to an acceptable level the vulnerabilities of friendly actions to adversary exploitation.

Information that is critical to the survival of your family simply does not need to be known by anyone else outside your family or your core group of friends that have chosen to “prepare” together. The families involved, what your sheltering plans are, your quantity of food, where it’s stored, your armament, munitions, communications equipment, bug-out points . . . . and the dozens of other pieces of information pertaining to your preparations and your plans are simply no one else’s business – period.

Should a large storm happen and make resupply of your area difficult or impossible – you can decide – at that time – whether you can share your resources without endangering your family. If everyone within a 10 mile radius knows you have supplies – and they are hungry enough – some may well decide to come pay you a visit and simply help themselves.

In the event things go sideways in a truly large fashion – I want you to think about the millions of folks that live in large urban areas that typically have 3 days of food on the shelves. Let the images of stores being swamped with business prior to approaching hurricanes in recent years play through your mind. Now – multiply this a thousand fold . . . . desperate people take desperate action. If your location is well known, if the fact that you have stockpiled large stores for your family is widely known . . . . you will have visitors. It’s as simple as that.

To add just another layer to the mix here – much of what I have just stated is frowned upon by our current administration and it’s iteration of our federal government. The federal government cautions us about groups of people preparing for natural ( or un-natural) disasters, people taking steps to properly provide for, care for and defend their families. They are being view with distain by some government officials and as domestic terrorists by more zealous officials. More and more we are seeing no-warrant, no-knock raids of families because of “rumors” and “fears” and “concerns” of activities that our government disapproves of.

The following headline raised some eyebrows in times recent to this writing: Palm Beach County sheriff gets $1 million for violence prevention unit amid questions about civil liberties. It seems that if you hear a neighbor spouting off about how much you hate our government – he’d like to pay you’re a visit. Think of that - $1 MILLION of your tax dollars to have your neighbor spy on you. Just to save the good sheriff a couple of bucks – I HATE THE WAY OUR CURRENT GOVERNMENT IS DOING BUSINESS!!!!!!! I expect a knock any day now . . . . sadly I say that only partially in jest.

So, how do you avoid unexpected visits from the government, local law enforcement, criminals or refugees from large communities?? Let’s start with the simplest of measures . . . . KEEP YOUR DAMN MOUTH SHUT!!!!! No one – and I mean NO ONE – outside of your family and your core group (should you decide to work with other like minded folks) need to know a darn thing about your preparations – food, fuel, power generation, bug-out plans, remote living locations, weapons, munitions, communications gear – NO ONE ELSE NEEDS TO KNOW!!!

Loose lips are your single largest challenge. We are a talking, tweeting, facebooking, blogging, emailing, photo-taking society. We have lowered way too many walls and it is all too simple to take a photo of you in your war belt on the range driving your tricked out Jeep with your bug out bag in it and then post in on your facebook page. Or show it off in your blog (and yes . . . I am fully aware of what I am doing on this blog, you DO NOT have to and SHOULD NOT follow my example). There is a nation’s worth of eyes watching you – some friendly, and some not.

Beyond keeping your trap shut, there will be times when you do need to communicate with family and friends about joint preparations. Securing these discussions falls broadly under the category of “Counter Measures”.

Counter Measures: That form of military science that, by the employment of devices and/or techniques, has as its objective the impairment of the operational effectiveness of enemy activity.

Obviously a military definition, however it’s useful. Anyone looking to do your family harm can rightly be called an enemy – it’s best you consider them that way.

Again, the simplest Counter Measure is to remain silent about your plans, particularly in your communications. That said – there will be times that you will simply need to communicate. For planning purposes – communicate with each other with the sure knowledge in your mind’s eye that everything you say and write will be read by your worst enemy . . . . and then plan accordingly.

Personally, I would discourage any type of cell phone/land line communications with you core group. Should you ever rise to the level of suspicion – you can be assured your chats will be monitored.

Any communications of importance should be done in written format and should be fully encrypted. There is any number of tools available on the net that will provide good “tactical” encryption (meant to survive 8 hours or less a determined effort to break your security). There are additional tools out there that can expand this window as well.

There are also tools available for “drops” where these communications can be left and then shared with others – DropBox comes to mind as well as public storage areas at Google, Amazon and a host of other storage sites.

Gmail also provides a good alternative for anonymous emailing using virtually any handle you wish. There is real value is conducting your communications in as secure a fashion as possible.

From a cell phone/texting point of view, there are a number of apps available that will encrypt your text messages. However, remember that information exchanged over your cell phone is tied directly to you.

Paranoid yet?? There is an excellent military document that addresses OPSEC as the military, and military families view it. It’s AR-530-1. It is out in the universe as a PDF file, however it seems to be marked “Official Use Only”. It’s not difficult to find via a Google search. Find it. Read it. It provides a serious glimpse into the world of operational security for our troops and their family. And, there are many good pieces of information that you would do well to incorporate into your daily life as a “prepper”.