Today’s modern semi-automatic pistols are typically equipped with replaceable magazines. The obvious advantage is that the weapon can be quickly reloaded or a defective magazine can be easily replaced. They are typically inserted into a Mag Well that is contained within the grip. A locking mechanism locks them into place and a Magazine Release allows them to fall free for easy replacement.

A good example of a Single Stack Magazine is the magazine for a standard 1911. 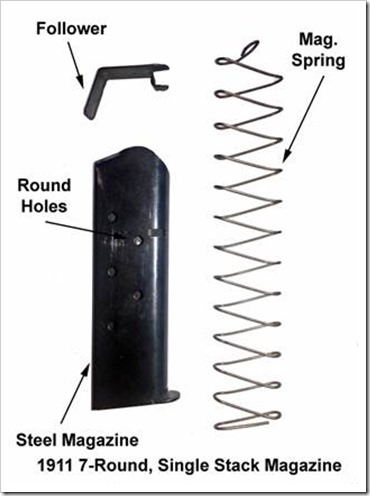 The Glock 17 magazine is a good example of a Dual-Stack Magazine. 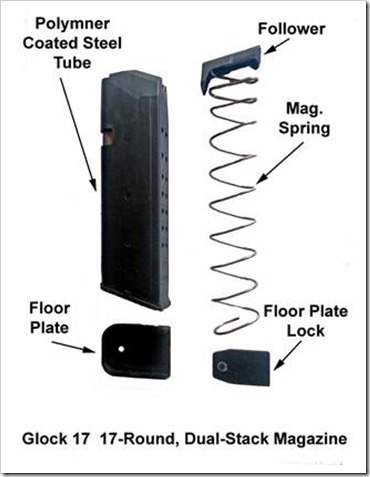 There are a couple differences in assembly. There is a Floor Plate Lock that is held in place at the bottom by the Magazine Spring. There is a small locking button that extends through the Floor Plate that locks the Floor Plate to the bottom of the Polymer Coated Steel Tube. A Follower is again used to push the cartridges against the top of the Magazine. When the weapon is fired, a new round is stripped from the magazine and loaded into the chamber readying the weapon to fire again.

Another difference is that this is a Dual-Stack Magazine. That means that there are two columns of cartridges in the magazine allowing for a higher capacity. This particular magazine will hold a maximum of 17 rounds compared to 7 rounds for the 1911 shown above.

Care and Feeding of Magazines

As with most things, Magazines like to be clean. You need to disassemble your magazines periodically to remove dirt, lint and any other crap that may get trapped inside the magazine during their use on the range. The absolute last thing you want is for a cartridge to fail to feed because of a small rock, chunk of lint or sand just when you are depending on that round to save your life.

These Magazines are your ammunition supply. Your life depends on them working well. Take care of them. Clean them and replace them if they continually fail during your range work.

Posted by eiaftinfo at 7:12 PM