It’s the very late 40’s and my dad is riding center seat in the rear seat with a bunch of his commuting crew to the Fisher Body plant in Flint, Michigan. It’s not his normal seat but late riders and other adjustments saw him sandwiched in the middle. No idea what the morning banter may have been like, but I met many of these men when I was very young – tough, coarse, loud . . . not unlike those I bonded with in the military decades later. Suddenly, near the plant, a car carrier went out of control, crossed the center line and smashed into their car. As the dust settled my dad looked to his left and realized half of his friend was simply gone. It changed my dad’s life; he lost his soul to the guilt of his change of seating that morning. By the early 50s he’d pretty well given up on life. By ’57 he was gone. A simple change in location changed his life. A simple change in location allowed me to be born.

Should things in our country, in our society go sideways, for whatever reason – your location may well determine whether you live to tell the tale of crash and rebuilding . . . . or if you become a name chiseled in stone detailing those occupying some mass grave.

We have two excellent examples of situations going to hell in a very big way in large population areas that we can draw some important lessons from – “Katrina” and “Sandy”.

Katrina has really taken on mythical proportions – especially in the political arena of finger pointing. However, when broken down to the individual level there are some very distinct lessons that you – as someone preparing to survive “the event” can draw.

Our most recent example of a large scaled event that affected hundreds of thousands . . . . hurricane Sandy. The biggest lesson? We learn very slowly.

What do these two events have to do with your thoughts on prepping?? A great deal, I hope. They were IDEAL events to respond to – plenty of notice, good tracking as to the precise time TSHTF (“The S#$T Hit The Fan”). Time is survival – it’s as simple as that. The more time you have to prepare, the more time you have to react – the better your chances of survival.

They are also good examples of group behavior that just naturally seems to happen in large metropolitan areas – “if you’re stayin’, then I’m stayin’!!” – kind of decisions.

In evaluating “Location”, people are primarily located in 4 population regions:

Mega-City: Cities with populations of 1 million people or more. There are 10 such cities in the US today.

Urban Areas: Cities with populations between 500,000 and 1 Million people. There are approximately 24 such cities in the US today.

Sub-Urban areas: Areas within 250 miles of travel from the center of Mega-Cities and Urban Areas.

Rural areas: Areas outside of the 250 miles radius of Mega-Cities and Urban Areas. 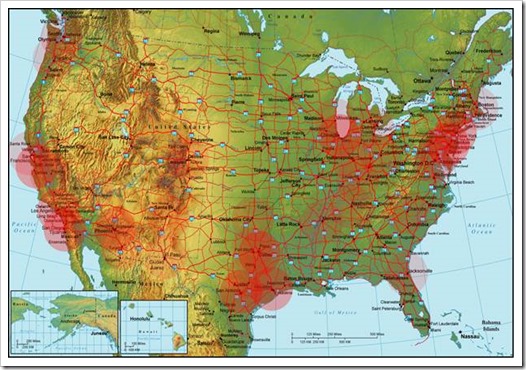 The 250 mile radius is derived from the typical maximum distance of travel during a total evacuation. The average MPG of cars and trucks combined is approximately 20mpg. The average gas tank for all vehicles is 20 gallons. And, most people will not fill up before they reach the ½ tank level. Throw in a bit of “fudge” factor – you get an approximate range of 250 that people can travel from major population centers before they are dead in the water. These are the areas that will be affected in a major way during a mass evacuation/exodus type event. I consider these areas to be the primary “danger zones”. Society will not do well. Government will be ineffective in controlling violent confrontations. Things will not go well in these regions of our country.

First – let’s just establish MY base-line for how to view your reaction and situation during a major “event”. HELP IS NOT COMING!!! YOU ARE THE ANSWER – THE ONLY ANSWER – TO YOUR AND YOUR FAMLY’S SURIVIAL. Nothing is coming to pull your butt out of the fire folks, nothing. You’re it! The sooner you accept this reality – the better your chances to live through your own particular piece of hell. You have all the time you need TODAY to prepare – get off your butt and get moving!

Second – and I will do an entire article on this topic, but I want to touch on it here ever so briefly – MINDSET! YOU choose to live or die. If things go sideways in a really big way and you look, watch and become overwhelmed and just decide “it’s over” . . . . then it is – you’re dead. Simple as that. FIGHT FOR YOUR LIFE! You, and your family, are worth it.

So let’s look at some options within the Mega-Cities and Urban areas – and outside of them.

Mega-Cities: Let’s just get this piece of advice out of the way first – LEAVE. Now, today, immediately. Find a different job in a place that is smaller, less congested and less potential for a complete disaster should “the worst happen”.

Still, most New Yorkers are not going to heed that warning, so if you live is a shoebox in downtown Manhattan – what are your options for prepping to survive a mini/max collapse? The primary two considerations for surviving past 3 weeks are food and water. Even small apartments can store a substantial quantity of food. Small residences, in major Mega-City environments would be a good place where the “Grab and Go Pail” I spoke of in an earlier article would fit well. They are lighter, easier to pack and in the event that your feet are your only mode of transport – they would be much easier to transport than larger, bulkier options.

Water is major here as well. You assume that when you turn on the tap, water will come out. During a major collapse – not so much. A couple 20 gallon food-grade plastic barrels of water will give you approximately 40 days of buffer at a gallon a day per person consumption. Good insurance IMHO.

OPSEC – Operational Security – is OF PRIMARY IMPORTANCE. If you are surrounded by a million hungry people – picture the worst case “zombie” movie with you their next victim. Keep your damn mouth SHUT!!

Should you decide to evacuate – evacuate EARLY. Pay attention! Up your situational awareness. Trust your gut. If you gut tells you to leave – leave!

However, if you choose to stay – concealment may well be your best weapon. If you have a store of food, a store of water – baring a “zombie apocalypse ” you may well be able to hunker down until some semblance of order is restored.

Urban Areas: Honestly, the advice is pretty much the same as for the Mega-City regions. Leave or shelter in place. If you choose to leave – LEAVE EARLY!! If you choose to shelter in place – concealment becomes your primary weapon. Even though there are fewer people, if you have a comfortable buffer of food stuffs to get through an “event” and hungry neighbors or “passers-by” do not, you will become a target in a heartbeat!

You may have an advantage of a larger living space – take advantage of that. Build a solid month buffer of food stuffs. Rotate your stock. Add 30 days of potable water as well – 20 gallon blue food-stuff barrels are cheap.

It may also be easier to add weapons to your defensive component – do it.

Sub-Urban Areas: People in this area are subject to two different and distinct threats – the actual “event” that is prompting a shift to survival mode – and the migration of those in the Urban and Mega-City areas that have decided to get the hell out of Dodge – they are coming folks, they are coming.

Your basic prepping steps – food and water – should just be a given. You probably have much more flexibility in the types of food stuffs as well as the quantity. And, you may have easier access to potable water as well. Still, the basics hold. Begin with 30 day supply, rotate it through your normal consumption and keep your mouth shut!

In the event there is an exodus from Urban and Mega-City areas – you may find yourself faced with frustrated, angry, hungry and determined people on your front lawn. We’ll work on home defense in later articles – I just want you to put that on your “things to consider” list.

Finally, Rural Areas: If you are very lucky – most of the people and damage will be sucked up by the 250 mile Sub-Urban region surrounding Urban and Mega-City areas. Simply put, the exodus will “run out of gas” – quite literally! That said, those determined to push past the 250 mile range will be exactly that – determined. In addition to the normal preparations repeated over and over – food and water for 30 days – the intruders will be those who have come through the worst. They may well be tougher and better equipped. Pay attention. Build your defense now.

Rural areas also provide many more options for food raising, food storage and movement. Once your basic work is done, make a broader plan should you, too, need to move.

Bottom line? If you can relocate to a rural area – and maintain the quality of life you are looking for – do it. You are much more flexible in rural areas than in Mega-City areas. But, if you are in an Urban or Mega-City, you can still prepare for a long term “event”, make a plan for you and your family and then prepare to execute that plan. Survival is primarily a mental decision – food and water simply make it easier.

Remember . . . . HELP IS NOT COMING! YOU ARE THE ANSWER TO YOUR ULTIMATE SURVIVAL!