Nothing can take the place of range time. While I actively promote dry-fire LaserLyte range time as many times a week as you can fit it – it still does not replace a couple hour range session where you can move/draw/engage a threat with multiple rounds. Still, time constraints and ammunition costs can certainly conspire to make this a difficult goal to attain. Depending on your range/carry weapon, if you are shooter intent on honing your skill – handgun ammunition can cost between. $.24 to $.50 per round. It adds up quick.

I have long spoke of my fondness for a Ruger .22/45. Their touch and feel mirror a 1911, weight is similar and I find that it works well to simulate my Glock 17 as well. Ammunition costs?? It’s more on to order of $.08 per round. That is much easier on the wallet with little or no degradation in training quality.

Step up to an AR platform – and you face many of the same issues when it comes to the cost of ammunition. The ammunition for my Panther Arms Oracle .223 runs around $.37 per round (at least today - 12/19/2012). While many skills need to be practiced with your primary defensive weapon – many can be worked on with a good quality simulation. My choice has been the Colt .22 Tactical trainer for the past few years. 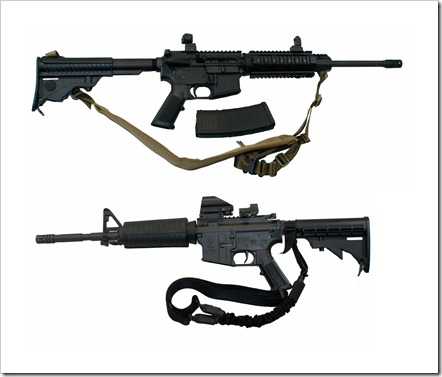 Let’s talk about weapon specific skills first, and then work up to a few more general drills.

Stance: I use a modified weaver as my base-platform for all three common defensive weapons – pistol, carbine and shotgun. (I’ve described this a number of time – just look back through my posts) As you become more proficient with your carbine, you can begin to add in the use of your handgun as a secondary weapon – incorporating both into your shooting drills.

Malfunction Drills: Whether pistol or carbine, there are the same possibilities for ammunition malfunctions – Misfire, Hang Fire, Squib Load. Clearing for these are also the same – Slap, Rack, Shoot for the Misfire and Hang Fire. And, the bullet from the Squib Load will need to be driven back into the breech with a sturdy rod.

Mechanical Failures also follow those in a semi-automatic pistol – Failure to Feed, Failure to Eject, Double Feed and Brass Over Bolt.

The most common cause of a failure to fire is that you are simply “out”. A quick tilt of your weapon so you can see if your bolt is locked back can tell you if you are trying to shoot with an empty magazine. Eject your empty magazine, insert a fresh one and press the bolt release – then re-engage your threat. Failure to Feed is most frequently caused by an improperly seated magazine. Slap,Rack,Shoot will clear this.

A second possibility is a damaged magazine – eject the faulty magazine, lock the bolt back, replace your defect magazine and press your bolt release to bring your carbine back into battery.

A Double Feed is the same in your carbine as in your semi-automatic pistol. A casing fails to eject and another round attempts to feed into a full chamber. Lock your bolt back and drop your magazine. Use our finger to clear your breech of the round trying to feed. Press the bolt release, perform a Rack, Rack, Rack and check if clear. If not, use your fingers or an AR tool to remove the faulty casing/round. Insert a new magazine, press the bolt release and re-engage your threat.

A Failure to Eject clears as with your semi-automatic pistol – Slap, Rack, Shoot should bring you back into battery.

And, finally, a “new one” – Brass Over Bolt. Either an unfired round or a poorly ejected casing becomes jammed between the bolt and the charging handle. Drop your magazine, lock the bolt back and slam the charging handle forward. This will typically dislodge the Brass Over Bolt malfunction and drop it out of your magazine well. Insert a new magazine, press the bolt release and re-engage your threat.

Obviously, these malfunctions MUST be worked on with your primary defensive weapon. Clearing actions should simply “happen”. As with your semi-automatic pistols – take the time to inject failures into your drills – either through the use of dummy rounds, or by disengaging your magazine or inserting an empty casing in your chamber.

Once you are past these issues, and have become proficient with your carbine, you can begin to work on various drills with either your defensive carbine or your trainer carbine (in my case, the Colt .22 Tactical).

Primary Weapon Configuration: A couple things need to be clear in your mind at this point. What distance are you looking to prepare for as you engage a threat. I expect most to be within 50m with a possibility of needing to reach out to 100m and perhaps out to 200m on a rare occasion. To prepare my Oracle for this range of fire, I mounted front and rear flip-up sights and an EOTech 517 as my holographic sight. I sighted the weapon in at 100 yards which gives me a target area of 2.5 inches at a range of 0 – 200m. More than accurate enough to be combat effective over that range.

The iron sights provide both a “peep” sight for long-range engagements as a larger diameter aperture for close-range rapid engagements. Add to this the EOTech provides rapid acquisition of a threat and aligns with the red dot settled nicely at the top of the front post when sighted through the “peep” sight. With this prep-work complete, you are now ready to work a number of engagement drills from the 50m to 50ft range.

Training Weapon Configuration: I set up the Colt .22 Tactical rifle in the same fashion. It comes with front post and a rear sight as part of a carry handle mounted on a flat-top rail. I removed this, replaced it with a flip-up rear sight and a Truglo Red Dot sight. This provides me an economical configuration that is roughly equivalent to the Oracle configuration I have set up. In the end, I have a .22 Tactical carbine that can be used to run the same set of drills from 50m to 50ft without the expense of .223 ammunition.

Targets: I have a fondness for two different silhouette targets for the range. One is an FBI Q target, the other a SWAT training target. You can find a link to both here. They provide a number of target areas - small sized triangles, squares and circles. And, larger body-mass targets allowing you to estimate whether you are achieving combat effective hits.

Center Mass Engagements: When you engage a threat, your purpose is to find the “off switch”. These are typically found near the heart, lungs or spinal column. Drills are simple. From the low ready – use a timer – come up on the tone and complete 2-4 round engagements. You will see three primary target areas – a center mass square, and abdominal square and a triangular head shot. Work these with your engagements.

Marksmanship Drills: The circles, squares and triangles around the outside of the silhouette are useful for marksmanship drills. Again, at the tone, engage these smaller targets randomly with single to multiple rounds. ACCURACY COUNTS.

Cognition Drills: Perform these with a shooting buddy. From the low ready, have them call out a target area, the order and the number of rounds. Then, on the command “UP”, or “SHOOT” or “FIGHT” – engage the threat.

At this point, the differences between your defensive weapon and your trainer begin to fade. Stance, threat acquisition, Center Mass Engagements, Marksmanship Drills, Cognition Drills are virtually identical for either weapon. However, your range costs drop dramatically with a .22 Tactical trainer. Lower costs typically equate to more range time. More range time makes you a more lethal shooter and a more accurate one.

As with a defensive handgun and an equivalent trainer – I highly recommend you find a .22 training weapon similar to your primary defensive carbine. Equip it in a similar fashion as your defensive carbine and then hit the range.

If you have found it necessary to use your defensive carbine to protect yourself, your family or your friends – the wheels have come off your wagon in a serious way! Your purpose is to hit your threat fast, hard and accurately . . . .