Just the Basics – What Makes It Go BLAMMMMM?

A few posts back we went through a training accident – a gunshot to your leg. Not fatal, but one of those “learning experiences” that we can all do without. So how did you get there, with a wounded leg and surviving only through the timely arrival of a shooting buddy? This is the first in a series of posts that will consider all the components of the event starting with:

What Makes It Go BLAMMMMM?

While there are many things that can propel a projectile that has enough velocity and mass to penetrate a human (or animal) and inflict a killing wound, for the purpose of this discussion, let’s confine ourselves to handguns / long guns/ shotguns.

The reason a handgun goes BLAMMMMM!!! Is this: 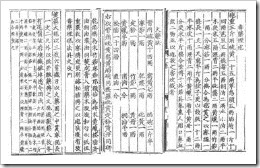 The development date varies, but by as early as the 7th century, China had developed the above formula for a mixture of Potassium Nitrate (or Saltpeter), Charcoal and Sulfur into a mixture that is, today known generically as “Gunpowder”. Beginning with a basic formula of 76% Potassium Nitrate, 14% Charcoal and 10% Sulfur, they developed at least 6 different formulas for use in everything from hand cannons to rocket propelled arrows: 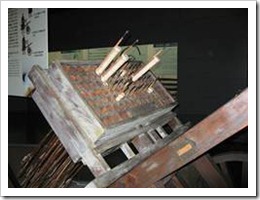 The basic chemical reaction is that the sulfur is ignited; this begins a chemical reaction with the Potassium Nitrate that releases oxygen to sustain the reaction and nitrogen. This increases the temperature enough to ignite the Charcoal – which then releases larger quantities of Carbon Dioxide and Monoxide. This reaction continues until the accelerant (the Potassium Nitrate since it “accelerates” the chemical reaction) and the fuel (the Charcoal and Sulfur) are consumed. The resultant gases – a mixture of carbon dioxide, carbon monoxide, nitrogen and a tad of sulfur dioxide) are the true propellants that expel the bullet down the barrel of the hand cannon, hand gun, long gun, shotgun or shoot the rocket into the air.

Of course, to use this chemical reaction most efficiently, the combustion of these materials must be confined and the discharge of the gasses must be “aimed” – hence the development of a long cylinder strong enough to hold the hot gasses – yet with a hole to both direct the gasses and to control the direction of the projectile – the barrel.

Early weapons depended on fuses that were embedded with gunpowder. Once lit, they delivered fire through a small port in the barrel that ignited the weapon’s charge which then fired, sending gas and projectile down the barrel. This controlled explosion of gunpowder is, indeed, the BLAMMMMM that we all hear on the firing line or in the field when we gently press the trigger to the rear until the hammer strikes the firing pin in a modern day weapon.

Early weapons evolved into the next most prevalent firearm – the Flintlock. 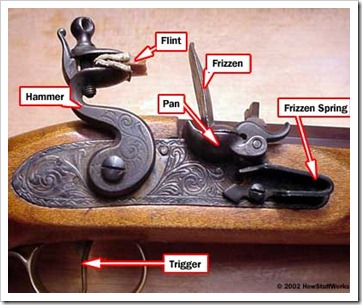 One of the earliest and most reliable ways to build a fire was with flint and steel. A piece of flint is struck with a piece of steel and the collision is enough to generate an energized particle we call a “spark”. The temperature of this spark is high enough to ignite gunpowder.

One of the earliest weapons to take advantage of this was the “Flintlock” rifle or pistol. 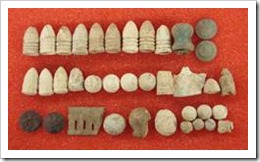 Basically the weapon is upended. A measured powder charge is poured into the end of the barrel. A projectile – usually a “ball”, surrounded by a “wad” is fit down the barrel and “rammed” to the bottom of the barrel. A small amount of gunpowder is poured into the “Pan”. A piece of flint is locked into the hammer and, when the trigger is pulled, it strikes against the “Frizzen” (a steel plate) generating a spark. This spark ignites the powder in the “Pan”, its fire then travels through a small port in the side of the barrel, ignites the powder charge within the barrel and . . . . BLAMMMMM!!

In the interest of reliability – the powder in the “Pan” could easily become damp and not ignite, the Flint and Steel were eventually replaced by “Primers”. 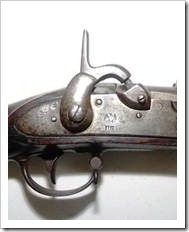 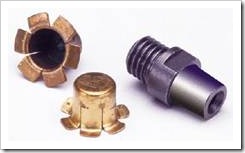 The “Primer” is essentially what you see today in the rear of a center fire cartridge. The material on the inside of the primer ignites when it is struck sharply. Again, the fire generated by the striking the primer travels through a port in the barrel and ignites the charge at the bottom of the barrel and . . . . BLAMMMMM!!!

As these weapons became the weapon of choice in armed conflict – the need to load them quicker became apparent. The development of the “Cartridge” began.

Early efforts were to simply combine the powder charge and the bullet and/or shot into a single paper-wrapped cartridge. 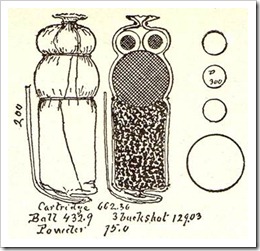 To load the weapon, the bottom is torn off; the powder charge is poured down the barrel and the paper wrapping the bullet acts as the wad to allow the bullet and/or shot to be tamped down the barrel. This process eliminated the need to measure powder, prepare a wad, tamp the bullet and prime the weapon to simply tearing, tamping, priming (inserting a new primer cap) and BLAMMMMM, greatly increasing the rate of fire of the single soldier.

The final step was the development of the “modern day” cartridge – essentially unchanged for over 150 years. 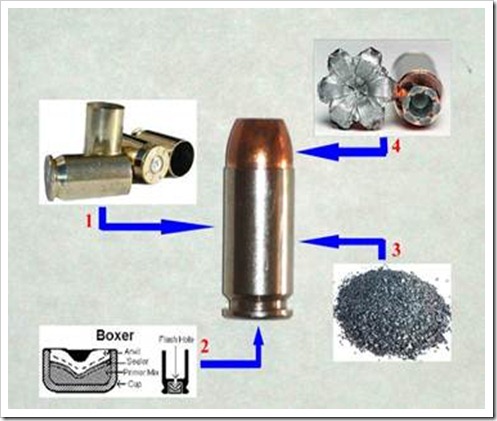 The casing (1) is the “chassis” that holds all the components together. Today it is typically made of brass (you can reload these), steel (one shot only) or aluminum (again, one shot only). Pressed into the center of the rear of the casing (think “center fire”) is the (2) primer. The Primer Mix ignites when struck sharply by the firing pin. In the center of the Anvil is a “flash hole”. The Anvil insures a small amount of gunpowder is very close to the Primer Mix. The primer is struck, the Primer Mix ignites, the flame travel through the “flash hole”, it ignites the gunpowder (3), and the gas expands and propels the Bullet (4) down the barrel, out the muzzle – BLAMMMMM!!!

This final development, the self-contained cartridge, again significantly increased the rate of fire of the soldier on the battle field. Next were the developments in the “actions” that allowed for a mechanical increase in the rate at which an expended cartridge could be replaced with a cartridge that was ready to fire. But . . . . that’s for another segment.

Gunpowder - confined, rapidly generated gas - gas expelled down a barrel behind a bullet - bullet exits the barrel at the muzzle - BLAMMMMM!!!!

Posted by eiaftinfo at 9:04 AM