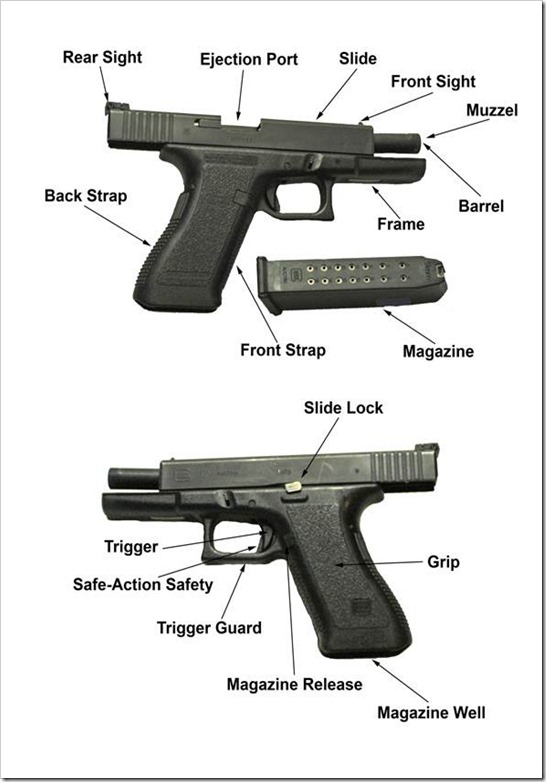 Perhaps the most famous Semi-Automatic pistol of modern times it the Glock pistol, first produced in 1982. The move to a semi-automatic pistol ( it goes “bang” every time the trigger is pressed until it’s empty ) captured the energy of the firing of the cartridge to eject the spent casing and to feed a new cartridge into the chamber. This allowed for faster, more accurate shots as well as an expanded cartridge capacity. The Glock pistol was the first mass-produced weapon that was made using a polymer material for much of the frame. The result was a much lighter weapon

It is called “Safe-Action” because the safety has been integrated into the very front-portion of the trigger. The weapon is safe until the shooter actually places their finger on the trigger and presses the first fraction-of-an-inch to release the safety and preparing the weapon to fire.

Let’s take a walk through this latest innovation in the world of the Semi-Automatic pistols.

The Hammer is manually thumbed back or moved into firing position by moving the Slide to the rear and releasing it. This prepare the Hammer to strike the primer in the cartridge.

The Magazine contains the cartridges to be fired and feeds a new cartridge into chamber each time the weapon if fired – until the magazine is empty. Magazines in many Glocks are “Double Stacks”. This means that cartridges are stored nearly side-by-side. While this provides a significant larger capacity in the Magazine, it does force the Magazine to be wider, thus increasing the overall width of the grip and the weapon itself.

The Trigger is the component that is pressed to the rear releasing the internal Hammer and firing the cartridge.

The name “Safe- Action” comes from the fact that the trigger performs as the weapons safety as well as to release a cocked internal hammer to fire the cartridge. Hence, this is a “Safe-Action” pistol. Because the weapon captures part of the energy of a fired cartridge to activate the Slide, eject the spent casing and to strip off a new cartridge from the Magazine and load it into the chamber – the only thing the shooter must do is to press the trigger to fire a new round. Thus, it is a Semi-Automatic pistol as well.

This particular weapon has been a favorite around the world since its introduction for recreational shooting, competition, personal defense and as a side-arm by our military.

Posted by eiaftinfo at 2:28 PM