Just The Basics - What Makes It Go BLAMMMM!!!! Pt3 - The Action Is Where “The Action” Is

Next, in Part 2, we discussed the characteristics of the barrel – the component that contains and focuses the energy of the cartridge and then increases the accuracy of the projectile after the cartridge is fired.

With this post, I want to discuss Part 3, the Action. As I say in the title, the action is where “The Action” is. What you see in the photo is the major components of the action of my .45 Long Colt saddle gun. I want to discuss the action in generalities first, and then we’ll poke our noses into the details a bit more.

The action knits five major elements together into a usable weapon. Those components are the stock, the barrel, the magazine, the mechanical components needed to eject a spent cartridge, insert a new cartridge in the chamber, cock the hammer, release the hammer to strike the firing pin – firing the cartridge and, finally you, the shooter. These elements are present in the Action regardless of weapon system. Here I am showing a lever-action rifle. Yet you can find matching or equivalent components in a single action revolver, double action revolver, semi-automatic pistol, 105 howitzer – they are all there.

In the modern day carbine, the metal housing that holds these major components together is called the Receiver. Yet, its purpose is the same – to join stock, barrel, magazine, mechanical components and human together into an effective and useful weapon. 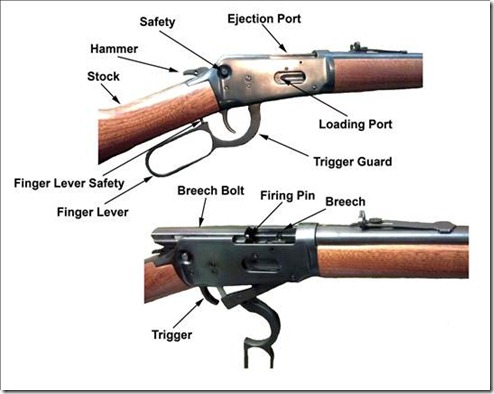 Let’s talk about common components of the action:

The Lever is the mechanical component used to eject expended casings from the weapon and push a new round into the chamber.

Thus, with Stock, Barrel, Magazine, internal components to eject, insert and fire cartridges, and a shooter to firmly grasp the weapon and aim, shoot and operate it – the weapon system is complete.

Now, picture in your mind’s eye the weapons we have detailed and discussed earlier. It’s not difficult to see how either the exact same component (think Trigger), or very similar components (think Breach Bolt) are present in all of them.

Posted by eiaftinfo at 5:10 PM