In part one we discussed, in depth, the cartridge and its evolution through the centuries. It is the component that holds the projectile – the bullet or shot. It is the first item required for a weapon to go BLAMMMM! And, actually, given the right conditions, it can go BLAMMMM all by itself – take a quick look at the following story:

Police: Bullet explodes in woman’s handbag while she shops at home improvement store

So, since we do not need a barrel to make a cartridge go BLAMMMM – what purpose does a barrel serve? Actually, it serves four distinct functions:

It receives the cartridge 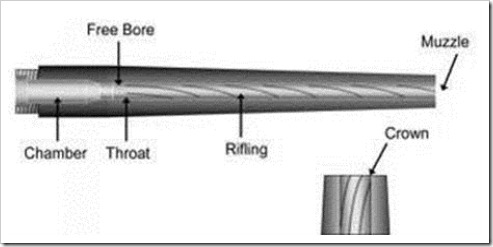 The cartridge exits the magazine and is driven forward into the chamber by the bolt. The bullet extends from the chamber into the throat – the very beginning of the bore - the hole that extends through the center of the barrel. The bore is microscopically narrower than the bullet. It has a number of grooves machined down it that are given a slight twist – this is called Rifling. This results in part of the bore being higher (Lands) and the groves that are machined out (Groves). This allows the bore to slightly grip the bullet as it exits, spinning it and increasing its overall accuracy. The end of the barrel has a slight inward crown machined into it that allows an even distribution of the gasses as the exit the region at the end of the barrel – the Muzzle.

The explosive power of a cartridge – be it pistol, rifle, shotgun or cannon – is massive. The primary characteristics of the cartridge that determine its chamber pressure are the powder composition (which determines its burn rate and overall energy content) and the quantity of powder. Chamber fit also comes into play since the bullet MUST be able to escape the barrel. On oversized bullet, jammed into a “normal” sized chamber will guarantee an overpressure situation and the destruction of the barrel. This can also be accomplished by an improper powder charge as well. The results, should the pressure NOT be contained, would look something like this: 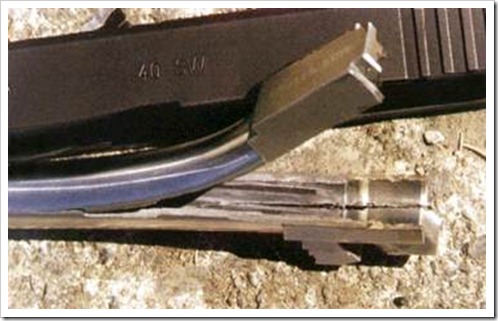 When everything works properly – the cartridge is properly seated, the firing pin in the bolt strikes the center of the primer, the primer ignites the powder, the gases from the powder rapidly expand, the explosion is contained and focused, the bullet exits the case, the bore – with its Rifling – grab the bullet, spin it and it exits the barrel at the Muzzle at proper velocity in the direction the barrel is “aimed” at. The barrel is an integral component of harnessing the energy of the BLAMMMM!

It aims the projectile

The centerline of the bore is machined to be perfectly parallel with the barrel. An aiming device is attached to the barrel to assist the shooter do direct their shot. Front and rear iron sights can be used to align the barrel with the intended target. A telescopic sight is used for long-distance shots. Holographic sights are used for close quarter, rapid acquisition shooting. But all share a common goal – to properly align the barrel with the target to insure that when the trigger is pressed and the cartridge goes BLAMMMM, the bullet that exits the muzzle hits the intended target – be it a piece of paper or an imminent threat.

It increases the accuracy of the projectile

As described earlier, the bore is machined in such a way as to create “Lands and Groves” - Rifling. The Rifling grabs the bullet as it travels down the barrel, inducing a spin in the bullet. The concept is the same as throwing a football that spins in a spiral as it travels or the feathers on the rear of an arrow that does the same to the arrow as it travels. 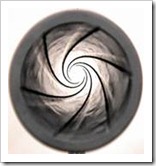 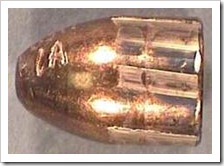 A spinning projectile has increased gyroscopic stability, allowing it to travel longer distances much more accurately.

When everything is combined, the cartridge is loaded, the explosion is contained, and the bullet exits the barrel with a spin induced by the Rifling. And you, as the shooter, hear that lovely sound that results from this process . . . .

Posted by eiaftinfo at 9:11 PM