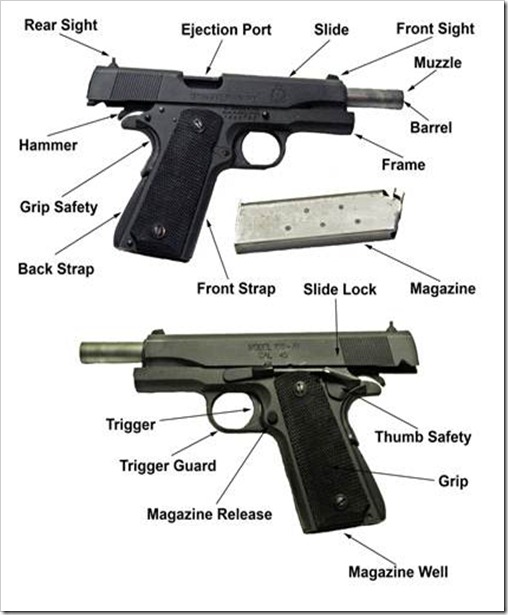 Perhaps the most famous Single Action, Semi-Automatic pistol on the face of the earth is the 1911 first introduced by the Colt company in – strangely enough – 1911. The move to a semi-automatic pistol ( it goes “bang” every time the trigger is pressed until it’s empty ) captured the energy of the firing of the cartridge to eject the spent casing and to feed a new cartridge into the chamber. This allowed for faster, more accurate shots as well as an expanded cartridge capacity.

Let’s take a walk through this classic weapon.

The Hammer is manually thumbed back or moved into firing position by moving the Slide to the rear and releasing it. This prepare the Hammer to strike the primer in the .45 ACP (Automatic Colt Pistol) cartridge.

The Magazine contains the cartridges to be fired and feeds a new cartridge into chamber each time the weapon if fired – until the magazine is empty. Magazines in the 1911 are typically “single stack” magazines meaning one cartridge is stacked directly over another cartridge in a “single stack”.

The Thumb Safety is mounted on the side of the weapon. Positioned up it fits into a notch on the slide it insures that the Slide is unable to move. Positioned down, the weapon is ready to fire.

The Trigger is the component that is pressed to the rear releasing the Hammer and firing the cartridge.

The name “Single Action” comes from the fact that the trigger performs a “single” function, to release a cocked Hammer to fire the cartridge. Hence, this is a “Single Action” pistol. Because the weapon captures part of the energy of a fired cartridge to activate the Slide, eject the spent casing and to strip off a new cartridge from the Magazine and load it into the chamber – the only thing the shooter must do is to press the trigger to fire a new round. Thus, it is a Semi-Automatic pistol as well.

This particular weapon has been a workhorse around the world since its introduction and continues to be a favorite for recreational shooting, competition, personal defense and as a side-arm by our military.

Posted by eiaftinfo at 2:03 PM