I find I’ve gotten a bit attached to my little Stevens M53-B. As I recounted in the post working with the scout on his Rifle Merit Badge, this has been in the back of my safe for a long time. It’s had little care frankly and though a consistent shooter, it’s zero was obviously off and it was in bad need of some lovin’.

Over the past week I used a bit of Rem oil and 0000 steel wool to remove the light surface rust that was scattered about the barrel. A nylon brush and denatured alcohol took care of years of GSR buildup in the chamber/ejection area as well as on the bolt. And, numerous passes through the bore with a brass brush and some Hoppe”s #9 followed with clean swatches produces a clear barrel with very pronounced rifling.

I’m in the process of evaluating Fireclean – a product being heavily promoted by Larry Vickers and one who’s primary purpose is to treat the surfaces of a firearm, especially any exposed to GSR to insure as much of the GSR is ejected from the firearm as is possible. The info being present is well worth investigating and using I’m using it on a host of my weapons this coming year. I’ll set aside further comment until after I’ve run a few thousand rounds through them to see if I notice a real difference.

So, I headed to the range today with a very clean M53-B and the intention to zero it in while there. I also took a Stevens 87A with a 4-power scope and a plan to wring out new sights that’s I’d installed on my carry Glock17. It was going to be a busy trip!

For this post, I’ll focus on the M53-B. The first task was to just remind myself where it was shooting. I set up a training target at 50’, set my bag up and sent 5 rounds down range. High, right was where it hit. 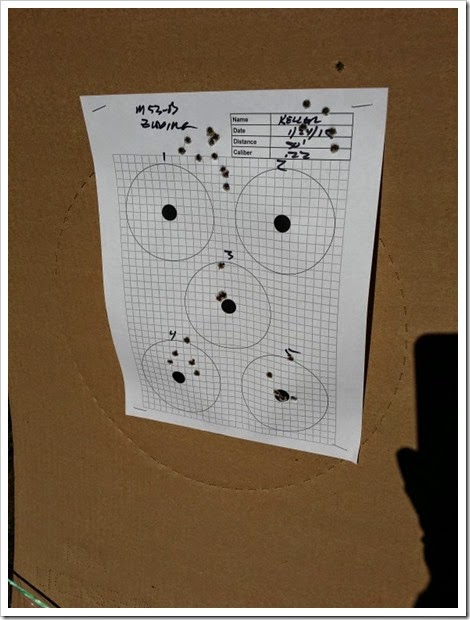 For me, I set Windage first. In this type of firearm the rear site is actually seated in a groove much like a semiautomatic pistol’s rear sight. Adjustment is handled in a similar manner. I wanted to move the rear sight in the direction I wanted to move the rounds – to the left. Taking a larger diameter roll-pin punch and a small ballpeen hammer and gave it a solid “tap” on the rear sight’s right hand side. Another 5 rounds went down range. The result indicated I had move about ½ the required distance. One more “tap” was applied, another 3 rounds down range and I was centered on the target. 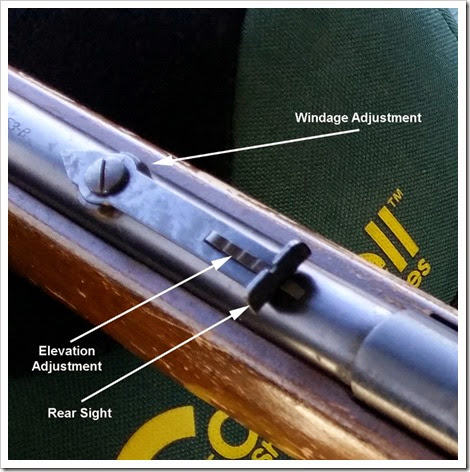 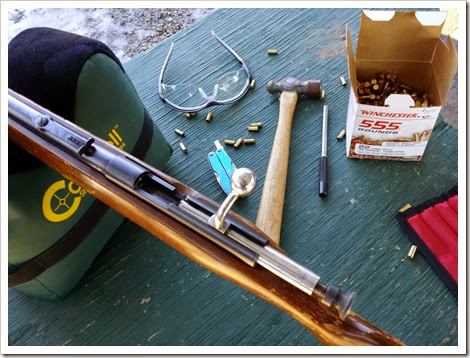 Elevation is adjusted by loosening the screw holding the rear sight in place and moving the Elevation Adjustment Bar forward or back depending on your required need. For me, moving the rear sight so it rested on the rear most notch dropped the rounds so all fell easily within the 4th circle. (each circle is 3”, the center dot is ½” and the grids are ¼”). My final 5 rounds were “fired for accuracy” on the 5th circle. A nice group of 3 and two “flyers”. What I discovered is that this particular firearm was configured to use a “6 o’clock hold”. The bead on the front sight needed to rest just below the dot on the target. The ¾” group on the 5th circle provided ample proof the rifle was nicely zeroed . . . the two flyers are good reminders that ALL THE FUNDAMENTALS MATTER!

Let’s talk a bit about that – the fundamentals of rifle shooting. I’m working on a much larger post on the subject – but for today, a few brief thoughts.

First – old guns like this (or brand new ones for that matter) are great training tools to teach the fundamentals. You don’t need a $5,000 sniper rifle to be a great rifle shot – you need solid fundamentals. An old gun like this, selling on most gun sites for about $150 – are great teaching/learning tools. The best part is that they are unforgiving – period. Sight alignment slightly off, trigger press not straight back, jerk the last little bit just to make it go bang? You’ll have a “flyer”. On my last target, after two adjustments for Windage and one for elevation I had three rounds within ¾” and two “flyers”. These flyers were not due to the gun – they were due to me. Either my breath management got the best of me (which was the case) or I was impatient (also had a role to play) or I jerked the trigger (that was NOT the case). The bottom line is that the lowly .22 and a moderate distance of 50’ can teach you volumes about how you shoot a rifle, what you need to work on and allows you to correct that at little expense.

So, while it may be fun to take your $5,000 sniper rifle to the range and blast away at 100-500 yards, unless you have the fundamentals, the foundation well laid – you’re just burning ammo and dollars. Find an old rifle, give it some love and let the old girl teach you a thing or two.

I also took the time this past week to repair a Model 87 that had been sitting in the safe for way too many years. An hour of love and it was ready to hit the range. This rifle has a special place in my heart. It was my dad’s and when I was 12 or so my mom took the rifle and me to be fitted with a 4x scope because I just had to have one. It has seen many years of sitting waiting for a squirrel to climb out on a branch and find its way into a pot of stew. It too had not really seen any real range/field time in many years. 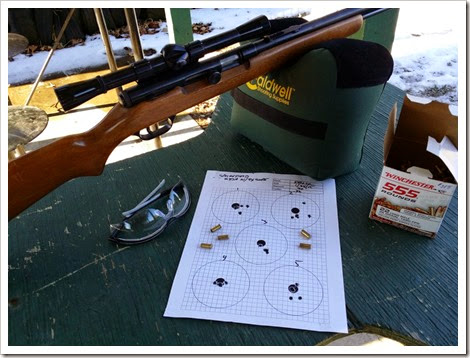 With a scoped firearm that is well and truly zeroed, excuses really fade and your own individual shooting skill is laid bare on the shooting bench. It can be humbling. As can be seen the first 5 rounds held a 1” group, the second showed a true lack of focus, the 3rd had two very tight groups and the 4th finally came right in. The 5th proves that you must make every shot, one shot at a time. Basically, this gun has not been zeroed since the fall of 1962. It has held zero for over 50 years. I think I’ll keep it.

Find an old rifle, give it some lovin’ and then enjoy adding it to your shooting rotation. She will teach you tons and you’ll be a better shooter for it.

Posted by eiaftinfo at 4:08 PM