k. Using a .22 caliber rimfire rifle and shooting from a bench rest or supported prone position at 50 feet, fire five groups (three shots per group) that can be covered by a quarter.

As a trainer I often hear a “phoo – phooing” of instructors that “just teach scouts”. I suspect most of this “down their nose” attitude comes from the fact that they’ve never actually taught a scout or any younger-ish person a skill as complex is putting 5 rounds into an area the size of a quarter at 50 feet. (yes, my error, seems the requirement has dropped to 3 rounds per group – I missed that). So let’s take the opportunity to look at my range morning today from a couple different points of view.

A 12 year old male scout is a bit like a Labrador puppy . . . small for their feet, not fully under their own control, absolutely filled to the brim with boundless energy. And, they don’t always think before they act. For example, while it was “warmer” today it was still on the chilly side, about 38*F and windy. So, naturally he shows up with a hooded sweatshirt and tennis shoes. Our range still has snow around the shooting benches and is fairly wet. Within the first 10 minutes his feet are more than a little wet and getting cold. If you’ve spent time around scouts you’d know this is pretty typical. With around 15+ years around these critters I was just happy he had on a hooded sweatshirt and shoes rather than flip flops!

That said, scouts are great training aids for instructors. They are probably the most challenging students I work with simply from trying to get them focused. Their “bits” just never stop moving! Still, if you are unable to get them to the point where they can accomplish their final goal – shooting a quarter – you will more than likely lose a shooter from the sport. It is all on you – the instructor. So how do you get a new shooter to that point? There is a process – and it works for all new rifle shooters, not just scouts. Let me walk through my process.

Use a single shot rifle – period! I have a “clunker” in my safe, an old, beat up Stevens Model 53-B. 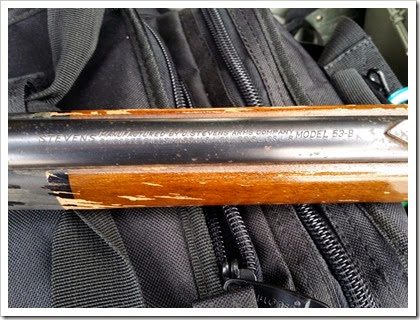 I’ve not refinished it or done any real work on it for a specific reason. Many times new shooters believe equipment wins the day – newest rifle, best sights, longest barrel – and the gun becomes an excuse for not shooting well. My old Stevens does a lot to set those thoughts aside.

As for a single shot – it slows a new shooter down so they can work on the fundamentals and not just the process of making the rifle go bang as quickly as they can. In fact this particular scout has a new Ruger 10/22 rifle that he brought. It was just impossible to slow him down so after a couple 5-round magazines worth of rounds down range I had him case his new, shiny gun for my clunker.

Eye dominance. This particular scout is cross eye dominant, a fact I’d determined on a past range trip. My suggestion here is please, don’t fight this. 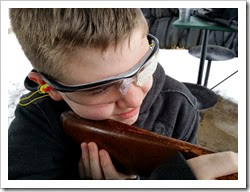 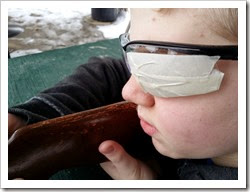 His best option would be to simply learn to close his dominant eye and shoot right handed – but being 12, it’s not within his ability yet. Or, have him switch shooting hands. Again, please don’t do this – again he’s just 12 and has done everything else right handed during his whole short life. The fight is simply not worth it at this point in his shooting career. My solution – just put some masking tape over his left eye on his shooting glasses. Less fighting mechanics means you can work on the foundational stuff. He’s 12 . . . plenty of time to make other choices as he gets older.

Position. This is the foundation of all things – and deserves a majority of your time. We spent a lot of time “dry fitting” the rifle to him. I use a shooting bag, have him firmly pull the stock into his shoulder and then use his support hand as a “fine adjustment” for elevation under the stock. His cheek is welded to the comb of the stock and his open eye lays behind the rear sight insuring proper sight alignment. Again – 12 year old scout – Labrador puppy. Ever see a lab puppy sit still? So be patient here. THAT is the gift to the instructor from such students . . . they teach you patience. Take advantage of that and refine this part of your instructor’s skill set. 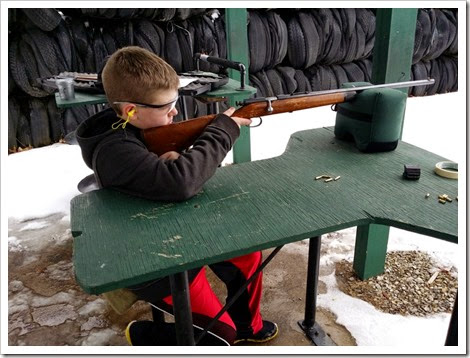 Trigger Press. Trigger press is that very last fine tune that you need to work on. Here’s what I mean. 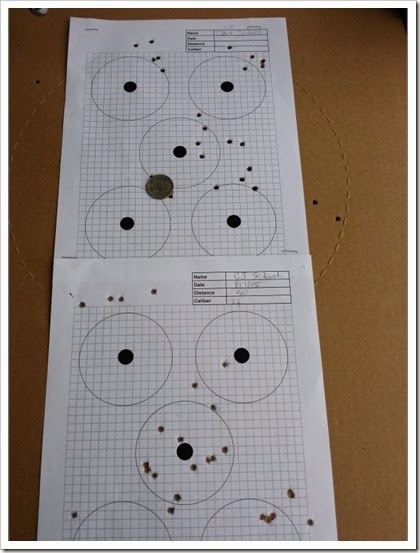 The bottom target is all the “foundational” work. Getting his head in the game. Moving from the 10/22 to the Stephens. Reminding him what sight alignment, sight picture is. Look at the upper left target – his last of the rounds on this target. What I asked him to realize is that his elevation was right on the money . . . the moving back and forth was primarily trigger press. We visited the target between every 5-round engagement. We chatted about what he saw, what I saw, how it could be corrected. You simply must do this with new shooters. If they just make holes from a distance and never have a discussion of things that they are doing that work vs those that do not . . . they will never grow as a shooter and will leave the range much more discouraged than when they arrived. Talk to your students. Acknowledge and praise improvements – and explain areas they need to work on. From his first engagements on the center target to his final engagement on the last upper left target, notice how he is tightening things up. THAT is your job – to get new shooters to understand that.

By this time we had expended around 25 rounds and ½ hour. With new shooters, especially young shooters, you have an hour. That’s it. After that they’re bored, cold, tired, hungry . . . you name it. Keep that in mind and don’t push it!

One other take away from the short video – trigger finger discipline. Notice the scout moved his finger towards the trigger, then as he settled he moved it to the stock, refined his position and then touched the trigger. I see these as little wins – self correction without me opening my mouth.

As you can see by the targets, his groups began to tighten. Upper left first, upper right next, center, then . . . lower left. By this time he is on the edge of being done. We’ve been on the range for right at an hour. He’s cold. His feet are wet. Another opportunity with student . . . to teach them how to “settle their mind”. We talked about how he was sitting, to keep his feet flat, good position with his rifle, sight alignment, sight picture and finally trigger press. I reminded him of one shot at a time. His result – his first “quarter”. 5 shots, all within touching distance of a quarter. To say he walked up and back to the target on that one would be an understatement. At that instant he realized he was fully capable of “shooting a quarter”. 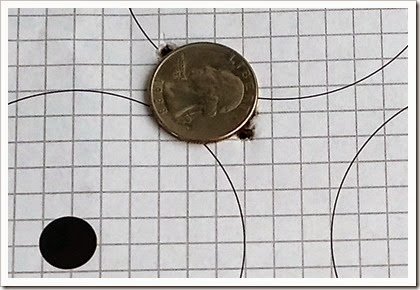 His last round of 5 opened a bit, but nothing serious. And his range trip was done.

Take-aways. As instructors it is just fine to make demands of our students. Yet patience will move them nearly as quickly. My old clunker rifle is a good reminder it’s not the gear – it’s the shooter.

And, finally, if you get the chance to work with a new, young, Labrador-ish shooter – take it. You will learn as much, or more, than they. And you’ll both step off the range a better shooter.

Posted by eiaftinfo at 2:43 PM