So I’m doing my standard “schpeal” introducing new shooters to the parts of semiautomatic pistol. I’ve removed the barrel so it can be passed around and looked at up close . . .

We talk about the Bore . . . the Crown . . . and the barrel’s Rifling consisting of Lands and Grooves.

To demonstrate their purpose, I use the age old football analogy. I ask . . . “How far does a football go if you just grab it by its sides and throw it? Does it go far? Can you do it accurately?”

Then I ask . . . “What if you lay your fingers across the laces and throw it forward with just a bit of loft to the throw?” 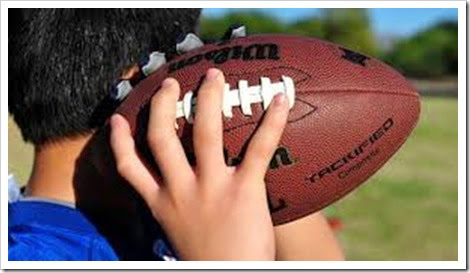 Again, I get those answers I’ve grown to expect . . . “You can get a nice tight spiral!” “I can throw it much more accurately!” “It goes farther when I do that!”

“Increased distance, increased accuracy . . . sounds like something I’d like to be able to do with a bullet when it comes out of the barrel . . . how can I do that?” And the link is complete to an imperfect but easily explained analogy . . . “The rifling in the barrel will spin the bullet . . . that will make it more accurate and let it go farther!” is the response from most of the class.

Exactly . . . so let’s chat a bit about how that occurs . . . how the barrel imparts spin – a spiral motion – to the bullet. And, specifically the “twist” of the rifling and its effect on the bullet. With a football, your fingers impart the spin to the football as you release it. In the barrel of the gun the rifling grabs the bullet and imparts a rotation to the bullet as it travels down the barrel towards the muzzle.

Remembering all the way back to the purpose of this series of posts, the discussion was about accuracy of the shot. One of the points of discussion was on bullet construction and the “bearing surface” and the importance of the length of that surface being exactly the same from bullet to bullet. Precision shooters will actually group bullets by this parameter as well to insure the round they load will shoot as precisely as all others they are loading in a specific batch.

The rifling is why that is important. You want the same amount of surface area to be grabbed from round to round. Provided that the powder type, powder quantity, head pressure, burn rate of the primer, bullet weight are all identical – the velocity will then be identical from round to round. That insures the bullet travels down the barrel at exactly the same velocity – imparting the same amount of spin to the bullet . . . insuring that, leaving the barrel, bullets that are fired from the barrel of the gun have exactly the same velocity and spin to begin with. Hence accuracy is held from cartridge to cartridge.

The “twist” of the rifling as it goes down the barrel is a primary factor in the amount of spin imparted to the bullet. And that is the focus of this post. What does the word “twist” mean? Is there a “proper” amount of twist for a bullet? How do we calculate that? How does it ultimately affect the bullet?

As in all things “precise” this is a pretty deep “rabbit hole”. We are only going to go down it to the tip of our tail . . . a real plunge can easily involve hundreds of pages and dozens upon dozens of formulas. That’s not within the scope of this post – or this blog for that matter. Still, to make a proper selection of a long gun and how to match it to the ammunition you buy – you need some basics. And, that is the purpose of this blog!

Rifling consists of “Lands” and “Grooves”. “Grooves” are cut into the bore of the barrel to a typical depth of 0.004” and 0.006”. The “Lands” are the raised portion between the Grooves. The distance between opposing Lands is the final caliber of the barrel. While standard manufactures lean towards the small depth end of the scale for a broad range of bullet types, those barrels designed specifically to shoot cast bullets would lean towards the deeper depth, and in some cases even deeper than 0.006”. The vast majority of rifles chosen for precision shooting at distance will have groove depths near 0.004”.

The idea of a “Twist” comes from the fact that if you wish to grab the bullet along the bearing surface and impart a spin to it as it leaves the muzzle, the grooves need to run down the barrel in a helical manner, a “spiral” if you will. As the bullet is expelled down the barrel the Lands grab it and spin it. The twist rate defines the number of inches of rifling it takes to rotate the bullet one complete rotation. For example a 1 in 10 twist means the bullet will be rotated one complete rotation in 10 inches of barrel. This “twist rate” remains constant regardless of the length of the barrel.

The number of grooves can vary widely depending on the purpose of the weapon, the bullet material and just plain experimentation over the years. There are 2-Groove, 4-Groove, 6-Groove, 7-Groove, 8-Groove and Multi-Groove rifled barrels.

The general formula for calculating “Twist” goes back to Professor Alfred George Greenhill and is simply called the Greenhill Formula. From 1876 until 1906 he was a professor of mathematics at the Woolrich Military Academy and focused much of his energy on analyzing the rotational speed required to stabilize an artillery shell. This general formula was adapted to calculating the twist rate of the much smaller bullet used in the small arms carried by soldiers. The general formula is:

That said, now let’s change the multiplier to 180 and calculate the twist for a bullet with a velocity that is typically in excess of 1,800 fps.

The Twist generates the rotational speed of the bullet. Going back to the .223 with a 1 in 10 twist the formula would look like this.

Revolutions per SECOND = (12/Twist Rate) * Velocity of the bullet

It is this spin that is imparted to the bullet that gives the bullet “gyroscopic stability” . . . so the bullet flies smoothly down range along its axis. Spin more slowly . . . the bullet may wobble and rather than a crisp hole in your target it may look more like a “keyhole”. Spin faster and it may well rip itself apart as it flies towards the target.

So there you have it. The rifling grabs the bullet, spins it, gives it stability and allows you, the shooter, to shoot a highly precise shot at distance.

Is there still grey area here? Sure. Stories have been told of precision shooters who have slightly increased or decreased their twist rate to increase accuracy. Consistency in the velocity of the bullet comes into play. Consistency of the physical dimensions of the bullet is a factor. Precision requires . . . precision in all things. Here, we are talking about a single component . . . the Twist of the rifling going down the barrel, what its purpose is, how the twist rate is tentatively arrived at and how it affects the bullet as it leaves the muzzle of the barrel. One more component to making a precise shot!

There is much more to this particular rabbit hole, do be afraid to go out and learn more!

Posted by eiaftinfo at 3:53 PM