On the various gun blogs and FB groups, there have been two rather dramatic stories of negligent discharges that injured off duty law enforcement officers. One holds the position of Chief of Police and the other a Sheriff’s Deputy.

There has been the typical ragging on these officers – much of it well deserved. And for the Chief there has been the “pooh-phooing” of an issue I have recognized as a real problem for years – the drawstring adjuster that is found in most jackets and cold weather gear today. Let’s take a look at the videos first, then I want to probe a bit deeper into this topic.

Lots of meat on those bones, so let’s start at the beginning . . .

What’s the purpose of your defensive weapon that you carry on your body or in your off-body carry purse or bag? Simply put, it’s a tool that can be rapidly deployed and is capable of deadly force should your life, the life of your family or someone in your charge be in immediate, imminent danger - if you don’t use your defensive firearm, you’ll go home in a ZipLoc.

How about your holster or off-body carry purse or bag? Their purpose is to make sure your defensive weapon in on your body, that it’s securely held in the same position each and every day and that the trigger guard is protected while your weapon is in its holster.

When should these two components part company? When you need to FIGHT!! When you’re in a safe area so you can unload for cleaning or in preparation for putting your weapon in a secure storage location. When you’re at the range and on the firing line. Otherwise . . . leave your loaded defensive firearm in your holster . . . PERIOD!!

How about at night when our weapon is near your bed should it be needed? Again, I would encourage you to leave it in your carry holster. Here you can see mine, along with my SureFire 6P flashlight on a magazine next to my bed. My defensive carry weapon – a Glock 17 – never leaves its carry holster except for the times listed in the paragraph above. EVER! 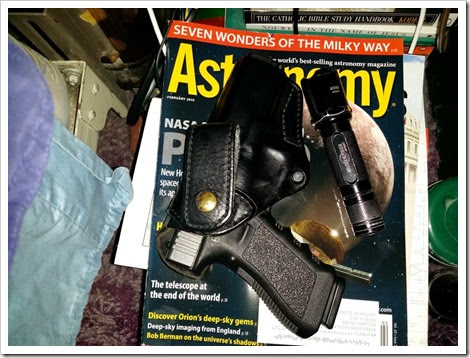 As individuals that actively train for our self-defense – or teach a broad range of skills aimed at enabling our students to defend themselves, we all “know THE rules” . . . the NRA “Always” rules, Jeff Cooper’s rules . . . they have become part of our lives. As I am sure it was with the two officers in the stories above. You don’t have multiple-decades of experience between them and NOT have been exposed to “THE rules”. And yet, both of these gentlemen ignored multiple rules with the result being a “ND” – negligent discharge. Why? I suspect they fell prey to one that experienced shooters all too often do as well . . . complacency. We are familiar with firearms, we handle them frequently, we train with them frequently, we teach others . . . we’re “experts”. For many, this seems to bring with it a feeling of invulnerability . . . it could never happen to me!

Reading over the comments on these two events there was no shortage of derisive comments, the “I can’t believe they’re so stupid” comments, an ad nauseum repeating of “THE rules”. The implication being that it happened to “them” because they were stupid but that it couldn’t happen to the poster because they were much more careful. I would simply caution against hubris . . . and make darn sure it doesn’t happen to you!

You’ll also notice both incidents happened during reholstering, when they jammed their weapon down into their holster. In fact accidents happen much more frequently during the reholstering than during the draw. Why you might ask. Again, look at the videos. The reholster did not go smoothly in either case. Both officers fumbled, tried to holster one handed (one was even juggling a package at the time) and were visibly frustrated. NOT a good combination in either case.

The reality for both of these instances is that there was NO REASON AT ALL for their defensive weapons to be out of their holsters. That is, to me, a clear indication of their complacency. They’re experts, they’re professionals . . . tut, tut, no worries. The end result dramatically shows what can happen to ALL of us should we get sloppy.

Caution on the range is even more important. My range trips typically involve a couple hundred rounds of ammunition, countless draws from concealment and EACH AND EVERY ONE is followed by a reholstering of my defensive weapon. The phrase I mentally say to myself and say to every student I am running on the range is “You have all the time in the world to reholster!” And that’s literally true. In the event of an actual defensive encounter where you have been required to use your weapon, why the heck would you reholster your weapon immediately upon firing your last shot? Wait until you know the threat is down and that law enforcement has arrived. Then slowly reholster your defensive weapon or follow whatever instructions the officers give you. There no need to hurry!

Finally, let’s talk a bit about those little drawstring adjusters. These evidently played a part in the Chief’s ND and many posters took umbrage to him citing them as the cause of his weapon going off. First and foremost it was his responsibility to make sure the throat of his holster was fully clear before reholstering his weapon – period! I will give no quarter there at all. 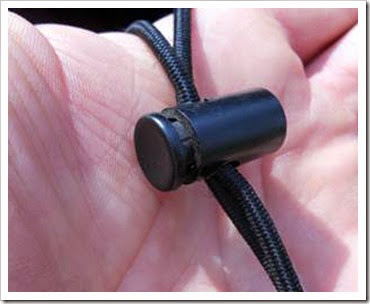 That said, if you have the little adjuster tabs on your jacket CUT THE DARN THINGS OFF! During a training at the beginning of December 2014 a young woman started to have problems reholstering. Sure enough, a drawstring adjuster was getting in her way. Two of us whipped out our carry knives to cut them off her jacket (with her consent, of course). My way of thinking is that this is very cheap insurance.

. . . you take carrying a defensive firearm seriously each and every day . . .

Posted by eiaftinfo at 4:09 PM