The two primary purposes of a long gun’s barrel are to contain the explosion from firing a cartridge and to project the majority of the energy that the explosion generates down the barrel towards the muzzle. And, to then grab the bullet, spin it and send it towards the intended target with as high a degree of accuracy as it can.

Again, just as a quick reminder, “accuracy” is a subjective term tailored to the task at hand. A sniper’s definition when making a cold bore shot at 500 yards is something entirely different than an armed citizen engaging a threat in their home at 45 feet. Accordingly, barrels can vary widely between tasks. For matters of this discussion, it is a broad based topic and not meant to completely cover the fine details of producing a barrel that can consistently shoot a sub 1-MOA out to 500 yards and beyond. It is simply my intent to provide enough information to see how much time, effort and money it can take to build an “accurate” rifle barrel.

Let’s begin with the raw material. First what it must do. It must contain chamber pressures approaching 50,000 and handle bullet velocities in excess of 3,000 fps. And, do so again and again and again . . . while maintaining its individual form factors insuring that the 10th shot or 100th or 300th is within the design specifications of the barrel.

In today’s world there are two primary types of steel that are used for this task. The first is Chrome Molybdenum used for such items as drive shafts, connector rods or axels for heavy machinery. In the US, these are typically designated 4140, 4150 and 4340. These particular types of steel are typically cheaper than other alternatives and can be readily coated for the familiar “blue” or “black rifle” color we are all familiar with.

The alternative material is typically stainless steel. Designated as 416 stainless it has the ability to be hardened by heat treating. It has a high chrome content, typically around 10% and has sulfur added to enhance it machining ability. In this configuration it is described as “free machining” and is “rust resistant”. It is widely held that stainless barrels have a longer life and are more accurate. Again, keep in mind is context driven.

Since a barrel needs to contain an explosion that can approach 50,000 psi, its “tensile strength” becomes another important characteristic you must pay attention to. Tensile strength is measured in PSI and it that force required to break a 1” rod by pulling on both ends until the rod separates. For the types of steel we are talking about, their tensile strength typically exceeds 100,000 PSI, twice the expected pressure expected to be contained by the chamber.

To adjust a barrel’s tensile strength it can be “hardened” – typically through heating. The balance that needs to be struck here is between tensile strength and how “brittle” the barrel becomes. Very brittle barrels that are struck on everything from rock to trees may well fracture making for a very bad day the next time a round is fired. In general, measured on the Rockwell C scale of hardness, barrels comes in at between 25 to 32.

Finally, while being heat treated to adjust the tensile strength and hardness of a barrel, stress can be introduced into the steel. As the barrel is run through the milling process and steel is removed these stresses may well bend the metal. To circumvent that, the raw rod is typically heated to a temperature around 600*C and then allowed to cool slowly over the better part of a day. This process may be repeated more than once to make sure the metal going to milling is as stress free as it can be made.

Most barrel “stock” is 1.25 inches in diameter and between 12 and 20 feet long. It is from this stock that a raw barrel is cut and prepared for milling. 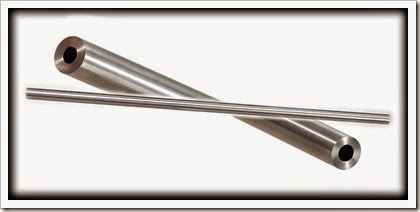 There are specially built drills – Gun Drills – that are used to drill a very precise hole in the center of the stock barrel. Modern metals have made this process a bit easier as have modern lubricants. Depending on the machine either the drill is pressed through the barrel or the stock barrel is pressed onto the drill. The final result is a hole, precisely down the middle of the barrel that is typically 5 thousandths smaller than the desired bore diameter.

Once the preliminary hole is drilled, a ream is used to mill the hole to the proper bore size as well as putting a high quality finish on the bore as well. Again the range of material used to make the ream varies providing tools that can ream a bore at speeds that vary from 1 inch per minute to as quickly as 10 inches per minute.

Rifling is the creation of “lands” – which are the diameter of the bore and “groves” which is where material is carved out typically to a depth that is a few thousandths. There are three primary methods of rifling a barrel – Cutting, Button Rifling and Hammer Forging.

The oldest method invented in Nuremburg in the very late 1400s. Each of the grooves is removed, one grove at a time. Each cut, 1/10,000 of an inch is made. Once the first pass in made, the process is repeated until the desired depth is achieved. The typical time to do a barrel using this method is one hour.

As is the case many times, war accelerates technology. During WWII larger machines with advanced cutting heads replaced the “single point” machines that greatly accelerated the rifling process.

The Button method radically accelerated the rifling process. A tungsten carbide “button” is formed with the rifling pattern created in “relief” – i.e. the grooves are raised to remove material and the lands are indented to leave material behind in the barrel.

The button is then attached to a “rifling head” that sits atop a steel rod that is then hydraulically pushed – or pulled - through the bore. The rifling head is rotated in such a way to provide the correct “twist rate” for the finished barrel. The metal for the grooves is removed, the metal for the lands is left behind.

Using the button method a barrel can have its rifling added in approximately a minute.

War again entered the picture with the German’s development of hammer forging. A tungsten carbide mandrel with the rifling in relief – as with Button Rifling – is inserted into a bore. A series of opposing hammers then use a rotary process to sequentially hammer the barrel down on to, and into the shape of the tungsten carbide mandrel. As this process continues the barrel physically lengthens growing as much as 1/3 in length.

Today’s hammer forges can turn out a finished barrel in about three minutes. While having the advantage of a highly polished interior there is significant stress introduced into the barrel during the hammer forging process. As such, true target shooters shun this type of barrel. That said, many manufacturers have begun to adopt hammer forging for many of their firearms for uses from hunting to military.

The final profile of the barrel is added nest – from “pencil” barrels to fluted barrels, care must be taken during the profiling process to assure that there is no changes in the centerline of the finished barrel. The material that is removed it typically done by a simple lathe. 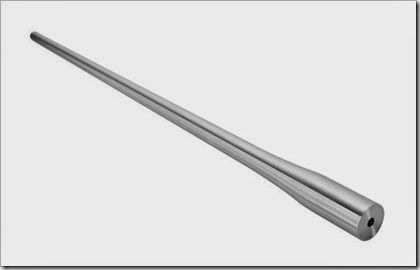 Lapping is a finishing process to polish the bore, remove any machining marks and tight spots. While embraced by some, others simply consider this part of a breaking in process and rather than lapping, prefer to “shoot it out”.

Final Accuracy of the barrel

There are two elements to this. First, that the bore is perfectly centered on the chamber milled into the rear of the barrel. The bore needs to be perfectly concentric for its entire length. The rifling must be consistent from the front of the Free Bore area to the end of the barrel.

The second element is the chamber that is milled into the rear of the barrel and centered on the bore. It is there that the worlds of a consistent cartridge, a finely machined barrel and chamber meet. One must fit the other perfectly with the bullet perfectly centered in the bore and its Bearing Surface resting in the Free Bore area. A perfect cartridge, containing a perfect bullet shot down the bore of a perfectly milled barrel will deliver as accurate a shot as the firearm is capable of delivering. 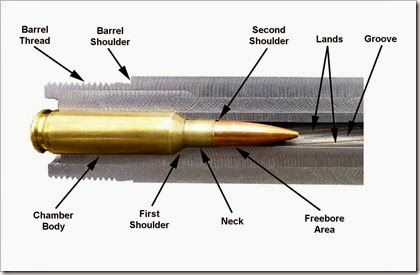 It is at this point again where we once again meet up with the word “accuracy”. The more accurate each and every shot must be, the more the machining of the barrel and the manufacture of the cartridge matters. For defensive purposes, at ranges out to 300 yards – you have much more flexibility than you do for precision shooting out to 500 yards and beyond.

Know why you are purchasing that particular long gun – then pay for the accuracy you need for the purpose of the gun.

Posted by eiaftinfo at 3:46 PM