Course development is an interesting task. For me it hits a number of my hot buttons.

I love to teach. I enjoy the process of taking something I believe is important – and sharing it with others. From teaching new clients how to use our product to teaching a new shooter how to safely handle their firearm – I simply enjoy the entire process.

I enjoy the learning part of teaching. Things change – technology, points of view, skill sets, best approaches – and if I, as an instructor – am not moving forward, neither are my students. For example – I first learned to shoot a 1911 on a military range in the summer of 1969. The process was to blade to your target (it was never a threat, it was a target), take your support hand and stick it in your pocket – or waistband, or hip pocket – extend your shooting arm fully, get sight picture/sight alignment and pull the trigger. This was the introductory shooting stance – which has much in common with bulls eye shooters of today and a far cry from today’s defensive shooting stances.

Enter Jeff Cooper and things changed with the “Modern Technique” of shooting a handgun. Obviously much more suited for defensive shooting but typically taught in a fairly static position. Still, the company he founded, today known as Gunsite, is pretty much a “have too” on the list of schools “shooters” have on their list to attend.

Within the last 15 or so years, new techniques for defensive shooting have appeared from trainers like Travis Haley, Rob Pincus, Gave Suarez, Chris Costa, Larry Vickers to name just a few. They have taken much of their personal experience from the law enforcement and military world – lessons that were hard earned – and adapted them to skill sets that can provide a defensive shooter a leg up should the real world intrude on their life in a very harsh way.

As an instructor the lesson here is clear – grow, learn, adapt and share with your students through the current coursework you provide. For me, what that meant was that it was time to update the handgun coursework I offer. I have long offered a “Handgun 1” and a “Handgun 2” course. But, since I first put them together – I’ve grown both as a shooter and instructor, it was time for an update.

If you remember, in November a friend and I headed east to yet another friend’s company to run our first blush of updated coursework past a number of his instructors and former students. You can read the full account here. Honestly, it being our first time rolling out the coursework, I could have done things better. I made the error of presenting the material in “parallel” presenting it from both a new student POV, as well as sharing the information with instructors. While it went OK, it left us with no real feel for overall course flow and timing. Lesson learned. Which brings me to this week and my presentation to some of my trainer friends and students of theirs – as well as some very special “guests”.

Let me chat with those of you who are trainers first – some considerations. When you are starting down the path of developing your own course work or updating your course work – one of the things to remember is that you’ve been “in the forest” a long time. Your course is “your baby”. You’ve developed it, taught it, enhanced it . . . you are very much emotionally invested in it. When you begin the process of updating it – or developing the next level to it – it behooves you to bring in folks from the “outside” to periodically review it and offer suggestions. I’ve been fortunate during this process to have access to a number of experienced trainers to offer advice, share their experiences and offer suggestions. Frankly, my friend and I are pretty darn happy with what we have. During the presentation linked above – even after all our efforts – a handful of holes were found. Good to find – frustrating to realize we left them out – but it provided the chance to add that material to the mix.

So what would a second round evaluation look like? For me, over the past few days, as I stated I had the opportunity present the material again to a solid set of “students”. A quick run down – A police Captain of a medium city-sized police force that has been a weapons and team instructor for over 15 years. Two other medium sized city police officers that are also team members and trainers – one in combatives as well. A young woman who is an active trainer and blogger as well as an active combatives student. The CEO of our state’s premier gun rights organization along with that organization’s current President. A young woman who is a very new shooter with only a basic pistol course under her belt over the past 2 years. Another young woman who is an avid trap shooter and just getting into defensive pistol shooting. And, the developer of what will be Iowa’s largest indoor shooting range opening mid-winter 2016.

What’s that saying – go big or go home?? The officers have all attended every large name school you can imagine. They are active instructors within their departments as well has having their own “line” of CCW coursework they teach in their area of the state. They are demanding instructors – and they took the coursework as students.

The first day was rolling through my updated Handgun 1 course, this time – taught as though all were students. What this revealed is that my time estimates were pretty much on the button for classroom time – right at 4 hours. This was followed by lunch and the range work – coming in at around 3 ½ hours, about what I had expected.

Once the course had been taught, another hour of “debrief” took place with me taking in the feedback. Suggestions were made to integrate a dry-fire block into the classroom element, some thoughts on the range work (which would be smoothed out by the dry-fire block in the classroom) and then on actual course content. Overall – the thought was that the material, the flow and the overall content were solid. With the tweaks – we are pretty much there. The advantage to reviews provided by this level of “student” is that they have a broad range of experience, little tolerance for BS and a willingness to be honest and direct. Exactly what you need to develop relevant coursework.

Another option as part of the debrief is to have a meal together. After the day, after a quick cleanup, after your mind has quieted a bit – go out together. And that is what we did, with as many as could make it, had some good Mexican food and a more relaxed period of sharing information, asking questions and evaluation. Here to, points got made, refined – as well as tummies filled. It was a good night. 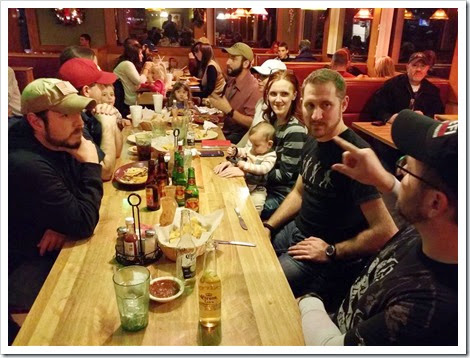 Day two started at the same time – 8AM. I make the assumption in HG2 that it is a course that may well be taken weeks or many months or even a year or so after HG1 has been taken. That means my first lessons are very similar to HG1. That allowed me to focus on new material, and “play with” some ideas for the dry fire block recommended after the first day’s work. Given it was a bit ad-hoc, I think it went well with the new shooters virtually all saying – “would have been good to do this yesterday”. Yep, would have . . .

Again the classroom material was covered in about 4 hours, followed by lunch and hitting the range again. HG2 deals with moving from using a handgun from pretty much a fixed location (think home defense and a safe room) to becoming a person who carries a firearm throughout the day. We began with a quick refresh, integrated a large sidestep, holster draw and both aimed fire with a very rapid site acquisition based on distance as well as precision shooting requiring the ability to place a single round within a colored/numbered square, circle or box. The phrase is a “Balance of Speed and Precision” – but the lesson is that hits matter and if you have enough time to place an accurately aimed shot, use the time.

We progressed from single round engagements or controlled pairs to strings of fire – all interrupted by the call for a precision shot on a numbered shape. Worked through a set of drills using a barricade and then on to the final drill - a “figure 8” drill. A single student walks a “figure-8” around a couple markers on the floor. The instructor calls a target and an aim point on that target. The result is a multi-round engagement on the “UP” command or a precision shot on the called numbered-shape.

After a quick cleanup, we adjourned to the classroom for one more AAR/impressions/ideas session. This was by far the most complicated day and generated more thoughts on content, methods of teaching it and a few more holes that were found. It accomplished exactly what it should have. Kindly, they – the LEO trainers – ended on the things they liked – a nice way to finished – thanks guys. Here too the bottom line is that content, drills, pace were very good. Fill in the holes, we should have our coursework for the next year polished and ready for spring.

So why even share this process? Well, for one I always do an AAR (After Action Report), it lets me get things on paper while fairly fresh. It also lets those who took the course see what “I heard/saw”. I am asking that they each write a comprehensive AAR as well so if I missed something, they can see it and remind me. Feedback is the instructors “gold” – and worth every word!

And, if you are an instructor looking to update coursework for the coming year, it’s my encouragement to you to gather a development team, define your “end game” – what do you want to have the student be able to do when they are finished with your course – and develop your coursework in that type of environment instead of just on your own. Finally, you simply must wring it out before you begin to market/teach it. I promise you there will be holes. Teaching it to other experienced, seasoned instructors is simply invaluable

Again, to the folks willing to give up two very full days of their life to have me a hand – thank you! If I can ever return the favor, just call.

A photo of the happy crew! 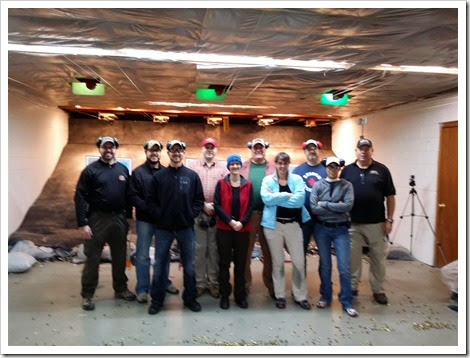 Posted by eiaftinfo at 4:03 PM