Review - Defensive Handgun Training - get out of your box

We’ve chatted in the past about taking training that pushed your personal limits . . . that demanded more of you that you typically expect of yourself. It’s the fastest way to grow . . . getting “out of your box”. I make it a point to take at least one training a year that really pushes me, makes me “step up” and teaches me things that I can integrate into my skillset. It keeps me “fresh”.

It doesn’t end there . . . there is the instructor side of my life as well that needs to be stretched, pushed, stressed as well. This past weekend was one such opportunity. A fellow trainer and I have been refining some course work that we believed would work well together. Mine was an introduction to the defensive use of handgun that I’ve been teaching, refining and using for nearly two years. Recently it’s been updated and it was time to wring out the updates.

My friend has been teaching his Dynamic Defensive Pistol course for about the same amount of time and had also recently updated his coursework as well. In conversations together, it seemed like a good idea to run these courses back to back in a brand new environment.

Enter a mutual instructor to our “east” . . . about 12 hours. (Yes, names are being withheld to “protect the innocent” J ). When I asked if he would be interested in our heading his way he was enthusiastic! So, this past weekend was our time. When asked about the weather his forecast was “rain, snow, sleet, heavy winds and low 30s! The weather will be great!! And, I have MREs!” he said . . . how could we refuse.

So, Friday morning – with my southern friend leaving at 3:30AM to meet me about 2 hours to my east, we met, combined in my Jeep and headed east for another 10 hours – arriving late evening. My friend and I had never been afforded the opportunity to spend 10 hours together to talk . . . I think we could become dangerous! We reviewed course material, ran the range drills through in our head, tweaked, suggested together, developed a new combined set of coursework . . . to say it was a productive 10 hours would be an understatement.

Our “student base” was going to be a mix of experienced instructors from throughout the Midwest as well as some very new instructors. We felt these folks would be our best shot at truly wringing out our updated coursework. Of course, it’s a bit like droppin’ your drawers in public . . . we had some pretty heavy hitters about to be given free rein to review our courses as they were taking them. More than a little intimidating! That said, if you’re unwilling to put yourself “out there”, it’s pretty difficult to grow . . . as either a student or an instructor.

Morning started early – 7AM - with a course “pre-brief” with our friend’s “core” instructor group. He offers a broad range of defensive training – from mixed martial arts to the NRA’s “Refuse to be a Victim” to firearms training. It was our hope we could fill a niche with our defensive handgun coursework and with an experienced cadre of instructors . . . what better place to wring things out.

We outlined what we were doing, how the coursework fit together and what we were expecting from them. I gotta, say a nice bunch of trainers – focused, experienced, opinionated, demanding . . . it was everything we could have hoped for! Once past the 1 hour pre-course review it was time for the remaining folks to arrive. With a full classroom in their seats (15ish I believe) we were ready to roll by 8AM.

I started the day with my defensive handgun course – a basic course but with an approach that begins with the idea that you are learning handgun skills with the intent to be able to defend myself. 78 slides, numerous demos, nearly 5 hours of lecture and give and take, along with a working lunch . . . I wrapped up the lecture portion of the course. Next would normally be the range portion. However, it wasn’t the rain/snow/sleet that really kept us off the range . . . it was the wind that would not have allowed a single target stand to remain standing that “persuaded” us to move into my friends Dynamic Defensive Pistol course’s classroom portion.

Another 2 hours of lecture of how the body responds when attacked unexpectedly . . . and we were done for the day. Then followed an hour of debrief with everyone, another 2 hours with the core staff and follow-up over a late supper at a local Bob Evans restaurant. Finally, about 9:30PM or so, we made it back to the motel – day one “in the can”.

Day two began with a repeat of meeting at the office early with our friend’s core group for new another review of the previous day . . . after everyone “chewed” on it for the night. The result was another hour of intense, focused and well thought out comments and ideas of the previous day’s work. To say this type of feed- back from training professionals is valuable would be a profound understatement! Then we packed up and headed to the range. The day was much better . . . 38*, becoming sunny and little wind, a nice improvement.

Range work for both of our courses is “busy”. I take a new shooter from firing their first shot to a “use of cover” drill in about 2 hours. It’s focused, mildly intense and busy. Everyone kept their head in the game, worked hard and before we knew it, my portion was done and lunch was on the way. After a very quick lunch we were back at it.

My friend’s range portion of his Dynamic Defensive Pistol is VERY intense – focused, incremental – with one drill building on the previous drill. Beginning to end, it’s a 6-7 hour range day. We had 2 hours . . . so we completed what we could. A quick review and then he moved them “forward” to new info. We made it through about 14 drills out of nearly 40 before the range closed for the day. The last drill was a draw from an open carry holster – with a startle response and movement – and a multi-round engagement center mass. There were tons of “wins” throughout the course but one woman in particular went from someone concerned whether she was up to the task to a woman who absolutely nailed her last engagement . . . complete with a big smile after she holstered her handgun for the last time!

This is what it looks like folks, very well done, from beginning to end! 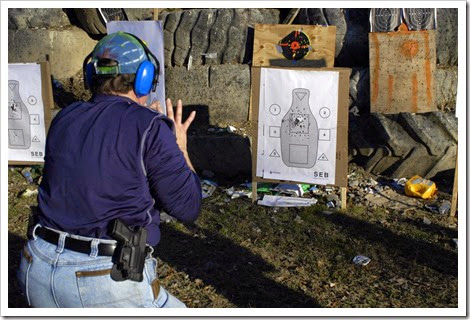 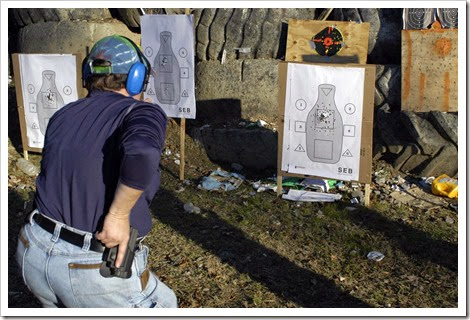 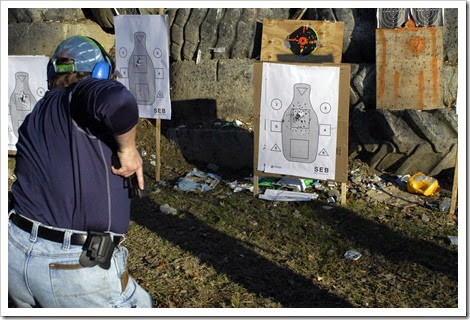 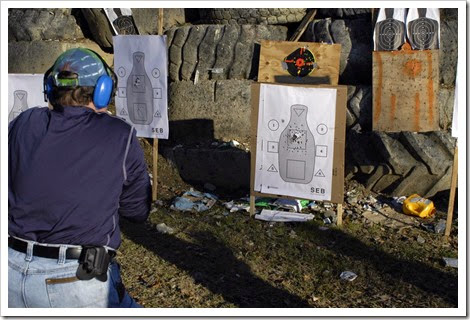 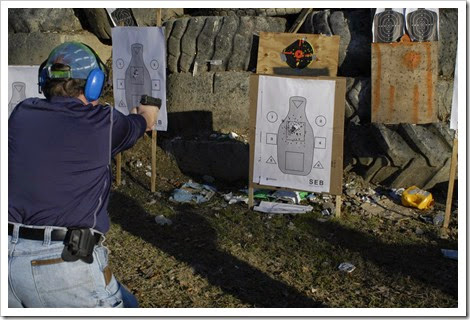 We wrapped up the range and headed for a nearby restaurant for a great meal of ribs! A nice way to end our trip.

Unfortunately, we just ran out of time for a follow-up after the range portion . . . so I am anxiously awaiting their AARs. I asked that they be “comprehensive”! I suspect I won’t be disappointed. I also began a feedback post in their core trainer FB group. My friend and I were humbled by one very kind post . . .

“In my opinion, these drills are more systematic, therefore easier to present instructively. I believe the drills all build on the previous one, hence the dynamic progress of the lesson. I would like to study the lesson plans and slides (when the time comes) so as to have a lineal picture in my head as I would teach it. Frankly, some of the best training I've ever done.”

To say the trip was worthwhile would be an understatement. It’s very unusual to have the opportunity to present material to experience instructors, run them through the coursework and then avail yourself of their feedback. Did they “catch” things?? Yep, some actually quite glaring omissions in my coursework. Without their willingness to “play” I couldn’t make the improvements!

Bottom line – a fine time was had by all with lots of “good work” being done across the board – classroom, range and in the final review. Folks, I cannot thank you enough! Here are a few of the photos of the weekend! It was one of the best training trips I’ve ever taken part in!