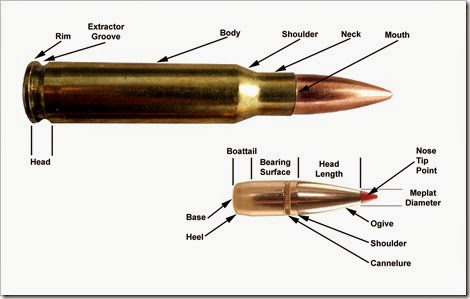 Parts of a Bullet

Base – the bottom of the bullet is typically flat. However, there are some bullets that have a dish shaped base or a hollow base. These last two are typically used to insure the bullet achieves a solid seal as it travels down the barrel. The modern day rifle bullets are virtually all flat based.

Heel – the curved portion of the bullet aids in insertion into the casing, assists in even distribution of the gasses around the bullet

Boattail – A boattail on a bullet primarily lends to accuracy for distance shooting – say 300y or greater. A flat base has a tendency to be more accurate for short ranges. Overall, for a defensive shooter whose primary defensive range will typically be 25y to 50y, and the defensive accuracy of a fist sized group is the goal, the difference between a bullet having a boattail or not has virtually no effect.

That said, if your focus becomes precession shooting at distance, a boattail begins to a have a measurable effect on your bullet’s trajectory.

Bearing Surface – the Bearing Surface is that portion of the bullet that is the bullet’s full diameter. It is the part that actually contacts the lands and grooves of the rifling in the barrel. Its length is one of the factors that determine the pressure that is built up. Longer, there is more surface contact with the lands and grooves thus more friction and higher pressure. Large variances between Bearing Surfaces within the same bullet lot can mean differences in pressure between rounds fired causing the point of impact on the target to vary. Bearing Surface is one of the parameters of a bullet that a distance shooter attempting to create fully “identical” cartridges will measure and sort prior to cartridge assembly.

Bringing the Bearing Surface component back into the defensive shooter world, slight variations between bullets – when looking for a fist sized group at 300 yards – would be negligible.

Head Length – The Head Length is simply the distance from the top of the Bearing Surface to the Meplat. For defensive shooting, the tolerance of this distance is of little consequence. However, for distance shooting the ratios between the Head Length, Neck – Shoulder junction and the outside case dimension become important in insuring the performance from one cartridge to another are as close to identical as possible.

Cannelure – the Cannelure can perform a number of functions. Perhaps the most common is simply a crimp mark so consistent bullet seating is made easier by placing the mouth of the casing on the Cannelure mark.

It is, at times, used to mark specific bullets – different mark sets can indicate a different weight or composition bullet.

Finally, it can act to help hold the bullet securely in place as a modern day rifle cycles – reducing any possible set back of the bullet into the casing during firing.

Ogive – this is the curve of the bullet beginning at the Shoulder and going forward to the tip. Small variances in this, particularly in how those differences affect the seating depth of the bullet in the casing, can have a real effect on the flight path of your bullet – even for distances as short of 100y. Again, for defensive accuracy – the variance is acceptable, but for the precision shooter it can cause unexpected “flyers” that can be difficult to explain.

Parts of a Casing

Mouth – is the end of the casing that receives the bullet. This region physically changes shape each time the cartridge if fired. To maintain precision this area may have to be trimmed to proper length as well and being milled to remain its concentricity thus insuring the bullet is properly positioned to go down the center of the barrel.

Neck – is that portion of the casing the actually receives the bullet. This area may also require some machining between the firing of the cartridge and then reloading it to insure the cartridge is as centered in the barrel as possible and properly fits the chamber.

Shoulder – is the transition area between the Body and the Neck. Care in keeping the length of the casing at its proper length helps insure the cartridge fits properly in the chamber at the rear of the barrel.

Body – is the primary container for the powder as well as the combustion chamber when the primer is struck igniting the powder.

Extractor Groove – provides a place on the rear of the cartridge where the spent casing can be grabbed and extracted from the chamber of the barrel.

Head – is the base region of the casing consisting of the Rim and the Extractor Groove.

OK, Ok . . . so why is it important to know all the names for the various components/regions/areas of a cartridge? I just want to be an accurate shooter . . . what gives?

It’s simple really, accuracy depends on consistence. Precision. That each and every cartridge is exactly, precisely the same as the last one you shot. That is what gains you a higher level of precision and accuracy in your shooting . . . at least from the cartridge’s point of view. If all cartridges are identical, all shots will be identical. It’s a beginning, a component of accurate shooting.

There are three general categories of cartridges that play into accuracy. There is “store bought” for lack of a better descriptor. You go to the sporting goods store, pick up a 500 round box of .308 and you have a reasonable expectation that every round will fire when struck, that their performance is fairly consistent from cartridge to cartridge and that once zeroed for that particular batch of cartridges, the zero will hold reasonably well for the cartridge’s stand point. Ammunition in this category is typically what I would use for defensive use.

Next is “Match Grade” cartridges. With this type of ammunition you can make the valid assumption that within the batch number of the cartridge, bullet weights, cartridge form factors, primers, powder, cartridge length are much more precise and consistent from cartridge to cartridge than it is with “store bought”. For those shooters that are moving towards precision shooting, this is a great way to begin taking out variations in ammunition when it comes to the accuracy of their shooting. More expensive? Yep, but the tradeoff is that you have extremely consistent cartridges that perform much more consistently than “store bought”.

Finally, to take that very last step – you have hand loaded ammunition. At this point the shooter is in complete control of the performance of the cartridge. The casing can be measured, milled, cleaned, polished to make sure it exactly meets the parameters of the chamber of the specific gun it will be fired from. The fire hole in front of the Primer can be cleaned to insure the best possible transmission of fire from the primer. Primer lots can be used so each primer in each cartridge as the same performance (within tolerances anyway). The same can be said for the “load” of powder – the type of powder, the exact number of grains that are loaded – all of which can be tailored to the specific bullet to be fired. The bullets can be measured, weighed and grouped together by weight, diameter, length to make sure each and every bullet loaded in a specific lot are as close exact as is possible.

Finally, a lot of cartridges loaded with the same primer, number of grains of powder with the same bullets can be shot through a chronograph to see If the load meets the specifications from the loading charts.

All of these little bits and pieces are needed to work together to provide you a cartridge that is “accurate”. As I said, for defensive use – “store bought” is more than accurate for defensive distances. One can easily up the level of accuracy by going to “match grade”. And, finally, a shooter can take that last step, gain total control of the manufacturing of their ammunition and hand load each and every round.

This is “Part 2” of the series. I defined what I meant by the word “accurate” in Part 1. Here we’ve examined that cartridge. In additional parts we will consider the rifle, the weather and finally the shooter.

Posted by eiaftinfo at 4:56 PM