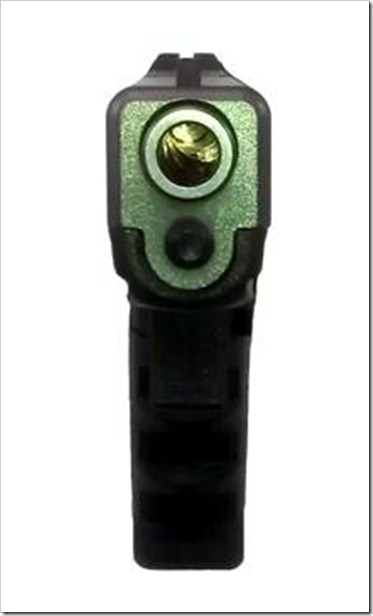 The topic of “MOVE!!!” covers a lot of ground, much more that a single post. It seems like we have been touching on a lot of those types of topics recently, so let’s just jump right in with the first of probably 3-4 posts and probably a couple videos as well.

Fortunately, few of us have had this intimate of a view of a weapon in the hands of a person intent on killing us. That’s one of the advantages living in a civilized society. For this majority, the idea of move or die is pretty much a mental exercise – you have to generate a scene in your mind’s eye, put yourself in the scene and then react accordingly – to imagine the experience.

For those who have experienced another human being trying to end their life, it takes little to convince them that movement on their part is a good idea.

Don’t be a “Range Target”: Think how most of us practice on the range. There is a little circle with a black dot in the middle or a silhouette target and it’s nice and stationary on the far end of the range. We put our “mechanics” together and engage the target - then evaluate the holes. All the time in the world to engage this bad guy . . . . that’s standing there . . . . not moving . . . . giving us all the time in the world . . . .

This is YOU – the range target – doing all the basic mechanics just right – as you engage an attacker – while being a “Range Target”.

One more time - don’t be a “Range Target” – don’t give your attacker a freebie by just standing there like a target at the far end of the range. MOVE!!!!

Slip inside their OODA loop: If you MOVE!!! you force them to react to you, not the other way around. As long as you’re moving they have to continually reacquire you as a target, to evaluate where you’re going, what you’re doing – this consumes time and ammunition if they are trying to drop you.

It makes you more dangerous: Attackers – other that truly committed ones – attack you because they see you as an opportunity for a quick score. But once you refuse to be an easy target, the math of the attack changes for them. If they realize that you – too – are armed and willing to kill them – the math changes even more. These doubts, these recalculations again allow you to accelerate the OODA loop and use it to confuse, evade or shoot your attacker. You are an armed, trained and skilled shooter – you ARE dangerous.

Keep moving: Once you have successfully escaped your attacker – keep moving. Make the call for help from the police. Tell them the “who, what, where, when” of your story – CLEARLY IDENTIFY yourself. And, remain vigilant that your attacker hasn’t simply changed direction and is still hunting you. If you can fully leave the area – leave the area and then file your report with the police.

So where do I “MOVE!!!” to?? That’s where the meat of this post, and the follow-up posts will be. Let’s look at eight basic directions and talk about the advantages and disadvantages of each in general. Then, I’ll break down these eight into three groups that I will drill down on with separate posts on each. 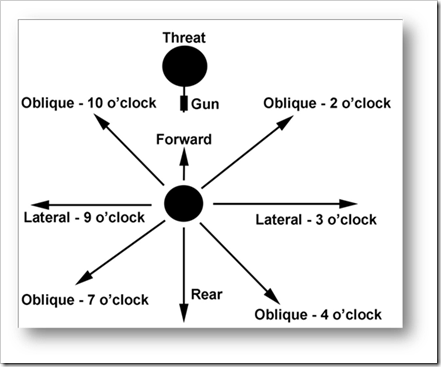 Rear: Our normal response is to simply draw and run backwards as quickly as we can while engaging the threat. The advantage is that this is quick, easy and your body considers this “natural”.   There are, however, three big disadvantages to this approach:

You have no idea what is behind you making it easy to slip, trip and fall  - now you’re easy meat for your attacker. Also, it’s difficult to “run” backwards quickly -  an attacker that is chasing you can easily catch you. Finally, the only change you attacker needs to make to keep you in their sight picture is to slightly lower their weapon as you run backwards. Not a terribly difficult adjustment to make.

Forward: This depends on your skill set, on your observational ability while under stress, distance between you and the attacker and a host of other environmental conditions. Your primary reason for this type of attack would be to seize control of their weapon. If you notice that their finger is on the trigger and that the safety is disengaged (or their weapon has no safety – think revolver, Glock), perhaps you are better off play for more time until you can distract your attacker. However, if you are in a confined area, their finger is alongside the slide or above the trigger guard, you can see that the safety is engaged and perhaps even that the “chamber loaded” indicator shows there is not a round in the chamber – well, you have gained some new insights into the attack and perhaps moving forward to disarm or to point the weapon in a different direction or even to gain time to draw your own weapon is, indeed, a viable option.

The risks to a forward movement are obvious – you must “win” or your chances of a trip in a Ziploc are very high indeed. I would consider this option a last resort but, if you choose it, a total emotional and physical commitment will be required of you and it must continue until your attacker is down and no longer a threat.

Lateral Movement – Left or Right: Lateral movements are frequently taught as an early method to “MOVE!!!”. It entails side stepping either left or right as you draw your weapon and engage your attacker. This is a fairly slow type of movement and while better than pretending to be a “Range Target” the adjustments your attacker needs to make to their sight picture are fairly simple adjustments. So, while you might force your attacker to make some adjustments, they are not major by any stretch of the imagination. Another caution with this movement is a real temptation to try to move quicker by stepping over your own feet – similar to some of the linemen’s football drills. While this can accelerate your movement – it significantly increases your risk of tripping and falling. Not a good outcome when facing a threat intent on harming you.

One very seductive reason for choosing one of these two directions of movement (forward/back or left/right) is that you can do them without really sacrificing the traditional two-handed, fully extended grip while shooting. While comforting, remaining a slave to this single way of holding your weapon to engage a threat can greatly limit your ability to “MOVE!!!”. Especially if you want to make moving in an “OBLIQUE” direction one of your options.

Movement on the Oblique: Oblique simply means you are moving at an angle that is something other than 90 degrees to the threat. For training purposes I use directions that roughly correspond to the 2, 4, 7 or 10 o’clock positions. These are not “hard” directions, simply a general direction of movement.

When you move in any of the four directions shown, you have the ability to move your feet in a direct line with your direction of travel and, you can do this with your toes forward. You can use the skillset you learned with the Focal Point Shooting exercises using the ¾ hip extension to engage your attacker when moving away from your dominant arm side.

When moving towards your dominant arm side, it is simple to transition from SUL position to a high ready Focal Point Shooting position. This again allows you to move toes forward while engaging your attacker.

Anytime you can move toe forward, your stability increases greatly – as does your speed of movement. This forces your attacker to respond much more quickly and allows you a better opportunity to slip inside their OODA loop as well.

Oblique movements are going to require a bit more detailing than I can give in a single post. For the next post, we will work on the Forward Oblique movements to the 2 o’clock and the 10 o’clock directions.

Your primary responsibility in a gunfight is your survival, the survival of your family and the survival of any friend in your charge. One of the primary tools you can have in your combat skill set is to accurately engage an attacker while you are quickly moving on your feet.

Your life may well depend on it!

Posted by eiaftinfo at 4:38 PM