This class just fell out of the “new shooter universe” over the past few weeks.  A young couple that really wanted to take it found that yesterday – Oct 7th – was the only day they could find in the next few months.  No problem – so a date was set about a month ago.  (Actually, they canceled yesterday – very sudden family illness but as of last night things were headed in the right direction.)  Then a friend said there were 5 women in a near-by community looking for a course – two were able to come.  And his wife, daughter and sister-in-law wanted to come.  Finally “The Boy” had not taken the NRA Basic Pistol class so we threw him into the mix.  Five ladies and The Boy – what a GREAT DAY!!

Biggest fear for these ladies?  Most had not handled a pistol at all and they were moderately nervous about them.  And – taking a course from “a man”.  Well, we worked them through all the basics – they asked tons of questions about everything, very fun – and the gun handling exercises.  That really seemed to take the edge off quickly.  As for being “a man” – honestly, I don’t want to change that aspect of “me” – but I’ve had 46 years of training from a pretty good task-mistress so they discovered my secret – I’m really a rather large teddy bear.

Seriously, they were exactly the type of folks the NRA was thinking of when they put “attitude” in their goals statement.  They were serious, focused, asked great questions about everything – honestly an instructor could not ask for anything more.

As for range time – again they did a great job.  I confess the military side of me comes out on the range.  I run it very tight – everything done on command – loading magazines, picking up the magazine, picking up their handgun, walking to the line, load and make ready, commence fire, unload and show clear, leave the line and return to the loading tables, ground the handgun . . . .  It all sounds rather tedious, yet that’s how I do it.  Women seem to accept this process without question – guys like to rush.  (The Boy provided a good example as well, must be all those years on the range with the old man).  I have them shoot two targets from 21 feet – one for practice and one for “qualification”.  They did just great!

The Boy showed his skill and his heavy range time with nice, tight groups in and just outside of the black.  Some of the ladies commented that they would be happy to pay him to shoot a target to show to the hubbies – he quickly came up with a $50 price (he’s a business major

) but I don’t believe any transactions were finalized!  Fun banter though, lots of chuckles and giggles ensued.

Back for the test and class photo.  Again, their focus and attitude showed through with upper 90s for all. 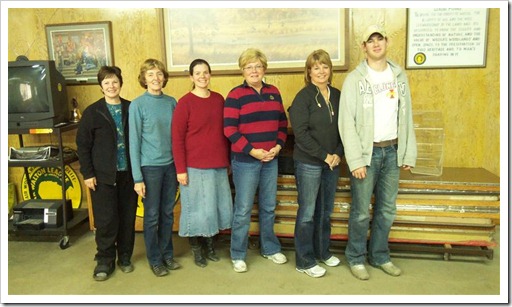 Posted by eiaftinfo at 9:38 AM