In Part 1 we covered the chemistry of the BLAMMMM.

In Part 2 we covered containment and direction of the energy produced by the chemistry of the BLAMMMM.

In Part 3 we covered the mechanics of releasing the chemistry of the BLAMMMM.

In our final segment – we get to the heart of the matter – the one true element that marries all the components listed above into the single, solitary explosion of sound – the BLAMMMM!!!!! 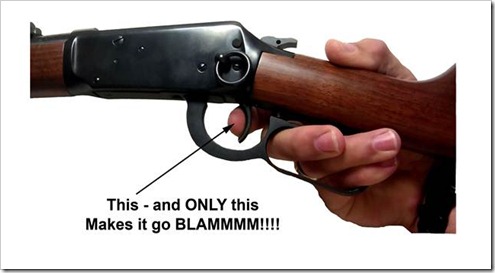 There is one – and ONLY one – thing responsible for the discharge of a weapon – you. We’ve all heard the excuses:

And yet, in under all the death, pain and mayhem that are represented by these excuses, at the end of the day the shooter – you – are the only thing that makes your weapon go BLAMMMM.

I write this blog for my students and for new shooters. Old heads with years of miles on them in the use and handling of weapons have seen the results of a trigger press, have zipped friends into bags to begin the journey back home, have seen shooters on the range that are alive simply by God’s good humor and know the truth of the image. They’ve seen the ease with which a bullet can destroy. They know that it is the last 1/3 of the last joint of their trigger finger that is responsible for the weapon firing. And nothing else.

However, new shooters with few miles are still coming to grips with the basics of our craft. In their head they know the truth of the image – in their physical training, their mussel memory, in their personal experience – they are not there yet. If we, as a shooting community, do nothing other than teach them the 4-basic rules of gun safety and instill in them the sense of responsibility that comes with gun ownership and with carrying a weapon for personal protection, we will have done our job.