Just the Basics – GET A GRIP

There are many pieces to the puzzle of a shooter being able to get hits on a target or a threat with a handgun – all equally important. However, there is one that acts as a foundation for all the others, their “Grip”.

A proper grip will weld your weapon to your body – it fully integrates it into your overall structure. It becomes an extension of your hand, your arm, your body. When done properly it transfers the stability of your body to the weapon and then channels the recoil of firing your weapon throughout your body. The final result of such a grip is that accurate shots can be delivered quickly to knock down the threat. There are three primary elements to a proper grip: it should feel natural, it should be consistent and it should be firm

It should feel natural.

There are many elements that go into a “natural” feel and they all contribute to the “this just doesn’t feel right in my hand” or “I love how it fits me” style comments. The overall shape of the grip is a large component. Early handguns had a tendency to be thick and round, more like the common hand tools of the time – a shovel, axe, hammer, buck saw – tools that felt familiar to the user. The disadvantage to this style was that it didn’t always properly channel the recoil into a shooter’s body. Of course early handguns were typically only fired once in a fight – the battle then continued with some kind of edged weapon – cutlass, foil, rapier or some other type of sword.

With the advent of a repeating handgun – beginning with black powder pistol and continuing through todays modern double action revolvers – the ability to fire multiple shots quickly meant that recoil needed to be managed more effectively to insure accurate follow-up shots. To help in this effort, the grips of revolvers changed shape to better fit a shooter’s hand. They became a bit thicker front strap to backs trap and a bit narrower in width. The curve of the grip became better fitted to the space created between the palm of the hand and the large pad of the palm beneath the dominant hand’s thumb. These modifications allowed the recoil to be channeled from the rear of the chamber through the grip and into the centerline of a shooter’s extended arm. By using the grip to “weld” the handgun to shooter’s body – the entire mass of the shooter could now be brought to bear in controlling recoil. This allowed the shooter to deliver quick and accurate fire on a threat – at least until the weapon was empty.

With the advent of John Browning’s 1911 a new element entered the vernacular – “Grip Angle”. This is the angle that the centerline of the grip is tipped “forward” towards the muzzle from the vertical. You can see the difference between the two most popular semi-automatic pistols – the 1911 and the Glock in the following Images. 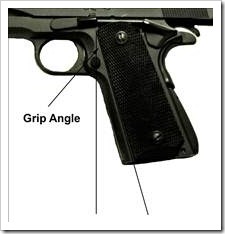 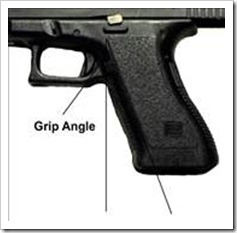 There have been countless thousands of posts arguing which weapon has the better “Grip Angle” – the 1911 at 11% and the Glock at 13%. The purpose of the angle is, again, to channel the recoil down into the shooter’s body. The story goes that the 1911 uses the angle of the knuckles of the closed fist of a fighter to find a “best fit”. The Glock uses the same angle but takes it from the striking angle of a martial artist’s fist delivering a straight blow. Good stories, logical – but I have no idea if they are true. What IS true is that if, when you wrap either weapon with your dominant hand, you find that it “just doesn’t feel right” – you will likely not shoot well with it.

So, size of the grip – depth and width, the length of the grip, the Grip Angle all contribute to the fit of the weapon feeling “natural” in your hand.

The grip should be consistent.

Every time you grip your weapon – it should be the same. This allows you to work on your sight picture and not worry if you are holding your weapon effectively for each and every shot. Let’s look at, what I consider, a proper grip for both a revolver and a semi-automatic pistol. 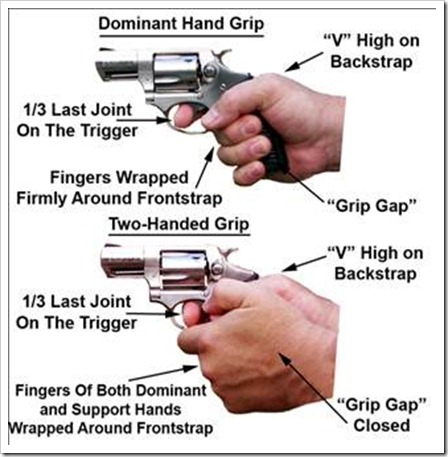 You Dominant Hand’s “V” should be high on the back strap with the “bottom” three fingers firmly wrapped around the front strap. You must train your body that your trigger finger is NOT PART OF THE GRIP!!! It has one, and ONLY ONE purpose, to press the trigger.

Notice that when you grip your weapon with your Dominant Hand only – you leave a “Grip Gap” between your finger tips and the large palm-pad beneath your thumb. When you fire your weapon, the recoil will escape through the area of least resistance – the “Grip Gap” forcing your weapon to not only recoil rear-ward and down your arm, but also to the right (for right-handed shooters) because the recoil escapes to the left, out your “Grip Gap”. This is simply something to be noted if you are shooting “Dominant Hand only” because you will have to compensate for it on your follow-up shots. However, if you are using a two-handed grip, you can mitigate this “problem”.

First, take your Support Hand’s large palm-pad and place it firmly into the “Grip Gap”. Then, wrap your fingers firmly around your Dominant Hand’s fingers that are already wrapped around the front strap. Place your Support Hand’s thumb on top of your Dominant Hand’s thumb. Both hands should then settle into a “Firm” grip – not a death grip. You are trying to control the recoil of the weapon, not choke it to death.

One side note – DO NOT LET YOUR “INDEX FINGER” OF THE SUPPORT HAND SPAN THE GAP BETWEEN THE FRONT OF THE CYLENDAR AND THE FRAME!!! When your cartridge fires, part of the super-heated gasses that are generated escape through this gap and will burn the extended finger. Emulate the grip in the image, and all will be well. 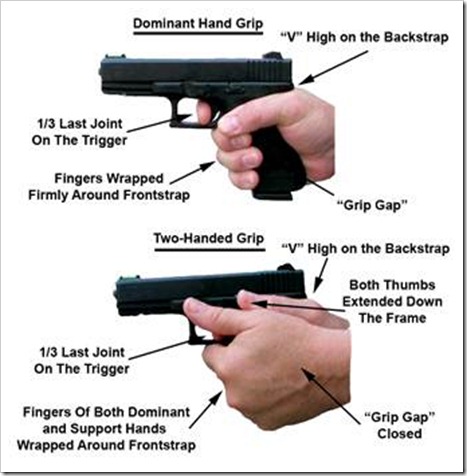 Notice that virtually all the components of the grip are identical to that of the revolver, for exactly the same reasons, with the exception of the thumb on the Support Hand. I like to extend it forward along the frame to provide additional purchase on the weapon. And, one additional thing, you do not need to worry about escaping gasses burning your hand as in the revolver, all gasses are contained and either go down the barrel or are captured and used to eject the spent casing and strip a new cartridge off the top of the magazine.

Your grip should be firm.

As I said above, your grip should be firm. You are trying to channel the recoil and aim your weapon, not choke it to death.

I’ve noticed with new shooters that it is relatively simple to have them using a proper grip with a .22 semi-automatic pistol pretty quickly. However, when they move up to a 9mm or .40 cal or .45 cal, all of a sudden their fear of the recoil has them putting their weapon in a death grip. The reality is that simply holding onto the weapon is the least important part of the grip. It is the channeling of the recoil that is the true purpose of the grip – to get your mass behind the weapon, to allow your body to absorb the recoil so you can quickly settle your sight picture after a shot and then re-engage your threat. Gripping your weapon harder and harder until your hands tremble does nothing to increase your accuracy or the speed with which you can reacquire your threat.

One brief comment about Glocks specifically. Since they are, in large part, polymer – they weigh less than a full sized 1911. However, they still need to capture as much of the energy of the fired cartridge to properly eject the spent casing and to strip a new round off the top of the magazine and fully seat it in the chamber for the next shot. It is not uncommon for new shooters to experience an excessive number of malfunctions involving “stove pipes” or failures to fully come back into battery (the slide fully forward and the cartridge firmly seated in the chamber). If you are experiencing this, try stiffening your Dominant Hand’s arm a bit. What’s happening is that you are allowing your arm to cushion the recoil. This absorbs some the of recoil energy of the cartridge and rather than being used to cycle the weapon, it moves your arm. This results in not having enough energy to fully eject the spent casing or to full push the slide all the way to the rear so it has enough energy to fully seat the new round.

Stiffen your dominant arm, lean into the weapon a bit more aggressively, maintain a firm grip and all with be well with the world.

So there you go – if your grip is natural, consistent and firm – you will be able to engage targets or threats quickly and accurately time after time.