Well, after – what – 9-ish months, the phone rang.  It was a very pleasant fellow by the name of Steve, a state patrol officer and state certified firearms instructor looking to take the NRA BP Phase II from me.  Things that make ya say hummmmmm . . .


Seems his state certification will expire the end of this year.  He’s not going to renew it.  In the state of Iowa a NRA certification is (as is a LEO cert) acceptable to teach a carry class . . . and the NRA BP course fills the square for an Iowa carry class.  I know, it all sounds fairly convoluted, because it is I guess.
Anyway, on his way to getting a NRA Certification, his first stop was the NRA BP Phase I online course closely followed by the Phase II course . . . and me.  So, this past Thursday we met and completed his Phase II coursework.  Since this has been my one . . . and only . . . BP course since blended learning was introduced I felt there may be some value in doing an AAR for it for those fellow instructors who may have interest in such things.


Steve is definitely an anomaly as far as students are concerned.  He’s been a patrol officer for 22 years, an instructor for the past 13 (?) if memory serves as well as a USCCA instructor.  Let’s say he has shooting and instructing experience.  All that said I can honestly say he set all that experience aside and truly jumped in as a student.  Honestly, few instructors can do that . . . very few.


The day began with paperwork . . . hold harmless agreements, media releases, filling out the Student portion of the 4-page “review” signoff sheet.  And we were off.  You would think that with an experienced individual you could blow through this puppy is a couple of hours.  The estimated time is 5 hours . . . it actually took just a bit more.  Keep that in mind should you students be “new and inexperienced”.  While it is one thing to assume that with a Phase I cert and PIN number in their hand, they truly “got” the on-line portion, the time it takes to roll through all the verification material simply takes . . . time.  Honorable instructors will do the work .  . . which will take around 5 hours IMNSHO.  (Keep in mind that even with the change to blended learning there was nothing stopping Steve and I from adjourning to a coffee shop – instead of the -5*F windchill range – and doing a little “wink, wink – nod, nod” and pencil whipping this puppy.)


During our working through the exercises we chatted some on how Phase I went for Steve.  If I recall it took me about 11 hours to complete the entire thing.  11 – what I would consider painful hours.  It took him a week of a couple hours a night to complete Phase I with a 90% first time through.   He expressed real concern how a new and inexperienced person would do and, as we rolled through the exercises and checkoff sheet. he continued to comment how he could see much of the “review” would probably be actual instruction.  I gotta say I agree.


One area that I believe Phase II truly got it right was the shooting portion.  The process, the flow, the round count . . . I like it.  Honestly it follows fairly closely what I do in my own coursework and is a good path to turn out a very proficient new shooter.  I left extra targets at the office so we ran a bit short but he qualified at the 10 and 15 foot distance no problem as well as at the 45 foot distance.  Honestly, wasn’t surprised at this given his level of experience.  That said, there’s always surprises.
As I indicated earlier – it was chilly, -5*F windchill and light snow.  Welcome to winter training in Iowa.  Anyway, he’d forgotten is patrol gloves and only had what most new shooters would have – fluffy, “warm” gloves.  Through the “development” phase things seemed to go just fine.  We got to the first qualification target . . . second circle and everything just plain went to crap.  Rounds hitting all over the frickin’ place.  WTH???  Now, I’ve seen this a couple of times, particularly with new handguns where a front sight loosens or a rear sight has been bumped in transit . . . so I asked to shoot 5 rounds to see how things went.  Nice 1” group . . . not the gun.  So, he shot, I watched . . . finally . . . “Steve, take off your glove . . .”.  So, he takes off his dominant hand glove and sends the next 5 rounds downrange . . . into a nice 1-inch-ish group.  He completed his course of fire for all the remaining targets I had out to 45’ . . . and shot the way you would expect a LEO Instructor would shoot.


I’ve not changed my mind on blended learning.  I can easily see Phase II being a full 8+ hours for folks not as experienced as Steve – much of it just spent in review and clarification.
This is an 8+ hour course.  For new and inexperienced shooters – with the added range work – and the review.  It’s a full day.  So the price on my end didn’t change - $95 for Phase II.  What that means on the range, with the requirement of not more than 2 shooters per instructor is that costs to the instructor increase significantly and classes of 10-ish with two shifts at the firing line with an instructor and an RSO are gone.  Adjunct instructors cost $150 per day . . . going to make this a very thin profit type of course.


Based on results, interest in BP has dropped significantly in my area.  USCCA, stand alone coursework and others have taken up the slack.  Folks demand face to face around here – at least those truly interested in learning to shoot and the Blended Learning course is now simply too expensive.  As I said, this is my first BP class of 2016 since blended took over.  I’m not optimistic about demand in 2017 either.
Thanks for the call Steve – nicely done!  Congrats! 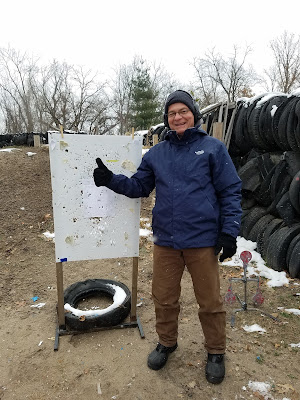 Posted by eiaftinfo at 9:28 PM