Armorer:        one that makes armor or arms
one that repairs, assembles, and tests firearms

One of the staffing holes our community PD has is that of an Armorer for their AR patrol rifles.  While not a huge issue as they are now rolling officers through a standard patrol rifle curriculum and qualifying them on that platform the need for a certified armorer has grown a tad.  There are a lot of reasons that holes like this exist in organizations . . . staffing, time, school availability, school costs to name just a few.  Our specific department had problems with both staffing and costs.  So Eric, the primary trainer forwarded me an email.  “Want to go to Armorer’s school??”   Hummm . . . give me a second or two . . . Sure!!!


November 29th found me traveling to North Liberty, Iowa’s PD for the first of a 2-day AR/M16/M4 Armorer’s course conducted by Defensive Edge/SLR15 Rifles headquartered in Anoka, Minnesota.  The instructor was Greg “Sully” Sullivan.  We began each day promptly at 8AM and ended at about 5:15PM.  There was a 1 hour lunch and a couple 5-minute breaks . . . otherwise you were using the supplied tools to break down you AR to the individual component parts.  It was a very valuable, very intense 2 days that saw each of us taking our lowers down to bare metal a dozen times.  Uppers were disassembled including barrel and gas tubes removal.  The Bolt Carrier Group was also fully disassembled, inspected, warn parts replaced and reassembled.  And, finally, stocks were broken down as well.  Obviously, we covered a lot of ground.
The first part of day one doing typical new-class mechanics and introductions to each other – I believe there were 20 of us in the class.  This was followed by a brief history lesson of the AR platform followed by an in-depth discussion of the weapon’s function and cycle of operation.  All this took about 3 hours.

Next we were told what we could expect regarding our tour through the platform.  It was basically broken up into three major categories – the upper, the lower and the bolt carrier group.  We were introduced to the tool set provided for the course . . . 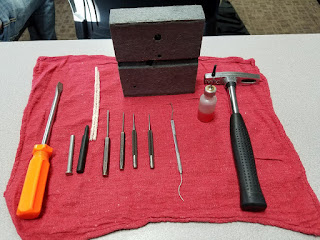 
We began by watching and learning how “Sully” wanted us to break down our weapons.  We separated upper from lower and removed the charging handle and bolt carrier group.  We set the upper and lower off to the side . . . and spent the rest of the day on the bolt carrier group.


We discussed its function, how it operated throughout the cycle of operation.  We did a quick cleaning with Sully’s recommended cleaners.  We also talked about how poor cleaning methods can damage the bolt carrier group . . . for example broken Q-tips left in the gas key.


We disassembled the bolt, the ejector, removed the gas rings and talked about how they contribute to certain types of malfunctions, how to check them for functionability, how to lube them and the addition of the little O ring on the ejector to help it be more reliable.  The only component we didn’t remove was the gas key since virtually all were all staked on.  Those that were not staked . . . were by the time we were done.


Add in lunch, a couple 5 minute breaks and we were at the first day’s wrap with a heads-up for the following day.  The morning was to be spent on the lower and the afternoon on the upper.  It promised to be just as busy . . . and he promised to get us grubby as well.


The morning of day 2 was spent on the lower.  Those with adjustable butt stocks removed the stocks and the buffer and buffer spring.  Next came the grip and the trigger group.  We inspected each component and chatted about its function.  We also removed the magazine release, the bolt catch and the dust cover.  We made lots of use of the punches and hammer as well as strategically placed tape to prevent scratching of the lower.


We also talked about the difference between single stage and double stage triggers, burst mode and full auto.  The phrase “drinking from a fire hose” comes to mind.  Throughout this part of the process we removed/reinstalled the trigger group a half dozen times.  I think I could do it in my sleep now.


After lunch, we moved on to the uppers.  There was no requirement that we actually remove our barrels from the upper.  We removed the handguard assemblies, the flash suppressor and gas tubes.  Sully had brought some grinder stands with vices attached and an assortment of jiggs to firmly fix the upper to the vice.  He also had an assortment of wrenches and offered those that wanted to remove and then reinstall the barrels.  What the heck . . . in for a penny . . . in for a pound.  I got in line removed the barrel and then reinstalled it – torque wrench and all.  By the time that was done we were told to do a final reassembly, clean up are areas and Sully would button things up.  After a few final thoughts, we were given our certificates of completion for the 16-hour course and sent on our way.  Gotta admit . . . I was pretty wiped by the time I headed home.


There is “the guy” who builds his own gun . . . and then those that also take an armorers course from a respected company.  I believe there is a difference.  Throughout the entire course we were filled with years of experience on how this specific component affected the operation of the weapon, how it failed – with live examples that were passed around.  Cleaning and lubrication was attended to and the products he recommended.  These primarily revolved around the Slip2000 products.  He paid special attention to lubrication for everyday use, training use and cold weather.


I first put a M-16 in my hand in August of 1969.  While I have never considered myself anywhere near an expert . . . after this two-day course I have absolutely no concern totally breaking down and troubleshooting an AR today.


I would not hesitate in the least to recommend Defensive Edge and their Armorer’s Course for the AR.