As I write this it’s November 23rd . . . the day before Thanksgiving.  Our contribution to the Thanksgiving Dinner is complete, arrival times confirmed as well as letting our hostess know that we are indeed coming.  It’s a time of gathering families together and giving thanks to God for all our blessings . . .


Unless you are the family of one of the 131 law enforcement officers that have lost their lives so far this year in the line of duty . . . 11 this month with the latest death this very morning.  Officer Collin Rose of the Wayne State University PD.  Their tables will have an empty place setting that will never again be filled.


Our officers are at war . . . actively being hunted . . . and yet they show up for work, tac up and do their patrols.  They respond to calls for help and hold the “Thin Blue Line” against pure anarchy in our streets.  Thank you seems so trite . . . so little . . . but, thank you for all you do.


An officer’s begins his shift with a number of weapons at his disposal . . . Taser, ASP, Knife, duty weapon, backup sidearm, shotgun and patrol rifle.  Each officer must be trained on each weapon – from “less than lethal” to lethal, and they must qualify annually with each weapon.


We had quite a range of experience in our course from one officer just a year out of the academy to officers with decades of experience.   Our community is just introducing the patrol rifle to their officers giving them one more means to respond to a potentially lethal threat.  The course is foundational in nature along with significant range time allowing officers to shoot qualification courses of fire for Marksmanship, CQB, low light as well as low light handgun.  Total round count was 800-ish over two days.  Weather was in the upper 30s with rain for virtually our entire second days’ range work – including all the low light shooting.  It was certainly challenging as well as rewarding.  My whole purpose of going through the course was to see what was taught, how it was taught and then to shoot the drills and the qualifying courses of fire.  A qualifying score is 80% for officers and 90% for instructors.  On the Marksmanship Course of fire I shot a 27/30 – 90%.  On the QCB I shot 48/50 – 96%.  This will allow me to lend a hand going forward in helping to teach their Patrol Rifle coursework.  Honestly our local department is simply stretched thin, as are most departments across the country.  If I can lend a hand, free up some hours . . . my time here at the course will be well spent.


·        Know how to load it in both tactical and administrative situations


·        Understanding the fundamentals of marksmanship


·        Understand Iowa law and use of force while deploying patrol rifles


·        Be able to disassemble and reassemble the patrol rifle


·        Be able to transition from patrol rifle to duty pistol


As I said . . . a busy 2 days.  To complete the course the officer needed to attend the entire course, pass a written test with a minimum score of 80%, pass the ILEA required courses of fire with a minimum score of 80%  (100 yards, 30 rounds and 50 yards with a half sized Q-Target, 50 rounds), the ILEA CQB 50 round course of fire  and the VPD low-light QCB qualification course with 50 rounds.


The first half of the first day was going through all the foundational material – how do projectiles perform, how do they wound, FBI ballistic information, methods of testing different projectiles and their typical penetration performance.


We then moved on to rifle nomenclature and the various components of a standard AR platform patrol rifle.


This was followed by working towards our range work.  Range safety was discussed, methods of clearing the AR platform as well as second-person clearing checks.


Shooting fundamentals were covered – mounting the rifle, hand position on the grip and foregrip, placement of the trigger finger, position of the adjustable stock, position sul, the low ready position.


The basic shooting positions were reviewed – Prone, Kneeling, Sitting and Standing.  Methods of sling carry and types of slings were discussed.  Loading and unloading the AR and finally zeroing.  We used the 10 yard, 50-200 yard zero method and insured that everyone was zeroed before we moved to shooting our various drills leading up to the qualification shoots. 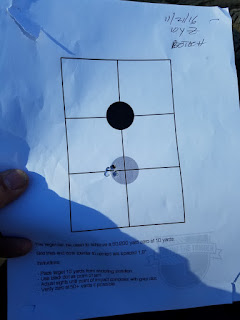 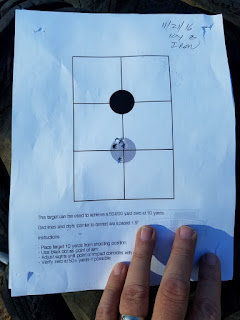 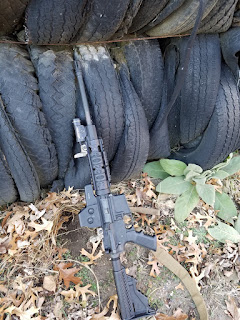 Range work on day one began with the zeroing process and then steadily moved each shooter back starting at 25 yards (I think) and then moving back to a maximum of 75 yards.  Our shooting range is a tad short of 100 yards.  Add in the cover over the rear area of the range and a vertical baffle, it becomes simply impossible to shoot a full sized Q-Target.  The solution, use a half-sized Q-Target and then push the distance out to 75 yards during the practice rounds.  Once we had worked through all the positions multiple times we shot the actual qualification course of fire.


The ILEA Rifle Marksmanship course of fire is as follows:


(Starting with safety on – 1 magazine change)


All shooting was done with either iron sights or a “red dot / green dot” non-magnified sights.  While not a particularly difficult course of fire – shooting in front of peers always ups the ante just a bit as well as the requirement that the officer must shoot a qualifying score if he/she wants to be able to carry a patrol rifle while on duty.  Everyone passed and, as I stated earlier, I was pretty darn happy to shoot a 90%.


On command the shooter fires 5 rounds then drops to a strong side kneeling position and fires the final 5 rounds.


On the command “MOVE” the shooter raises his rifle and begins to move towards the threat.  ON the “FIRE” command he fires 2 rounds – scans and then returns to the 7-yard line.  This process is repeated 4 additional times.


This is the exact same course of fire for the low-light course with the only difference being that there is a police cruiser just rear of the 50-yard line with headlights and flashers on.  Once the 15-yard line is reached the shooter could use their weapon mounted light as well. 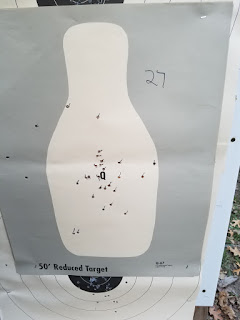 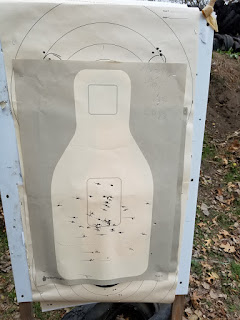 The officers were also run through the low-light pistol course as well.  Here murphy reminded me to pay attention.  We began the course of fire with three magazines loaded with 15 rounds each and an additional 5 rounds in our pocket.  I ran the course of fire – hear the training officer say something about managing our magazines and ammunition – I think what the hell, I know where they all are – no worries.  The final drill is to fire 6 rounds as fast as we can from the 5-yard line.  And . . . after a single round . . . I’m out . . . cause the other 5 rounds are still in my frickin’ pocket!!!!!  Heavy sigh!  Anyway, I only dropped 2 so even with the 5 unfired rounds I shot a 43/50 or an 86%.  No problem qualifying . . . but if my head would have been outta my ass it would have been a 98%.  Crap!!!!


The low light shoots were all done on the second day along with several shooting drills including a rifle version of “el Presidente” and a moving and shooting drill that forced transitions to the shooter’s duty weapon being conducted while we were waiting for “low light” to arrive.  The entire second day was also blessed with a constant rain.  Not a down-pour but a steady light rain that added a bit of discomfort to the mix as well.  Temps were in the mid to upper 30s.


Classroom time on the second day was spent on weapon retention, malfunction drills, taking the final written exam and then an After Action sit-down discussion. 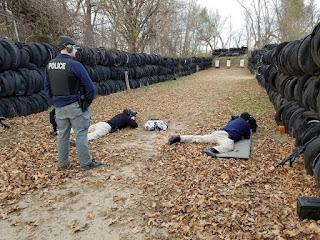 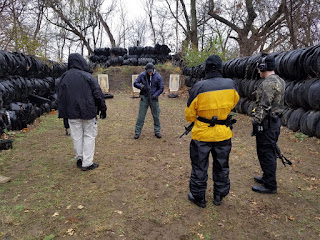 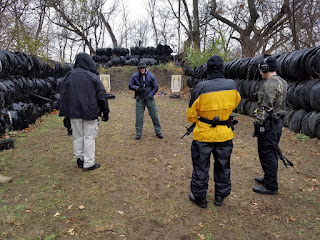 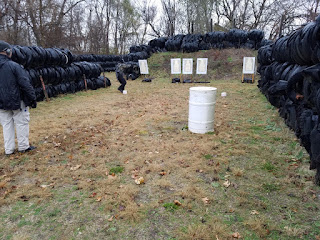 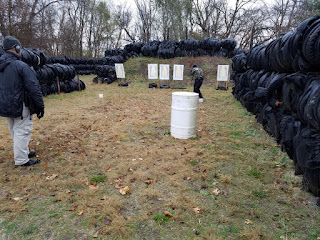 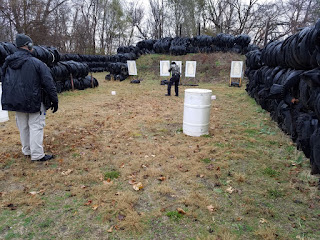 Some take-aways for me.


We are all fortunate that we have folks in our communities willing to do the “heavy lifting” to keep us safe.  Collin Rose was attacked during on 2nd day of class.  Each of these officers are well aware of the number of officers attacked and killed while on duty this year . . . and in years gone by.  They all know the risks . . . and the do their jobs every day.  As I said earlier . .  .  a “thank you” doesn’t begin to truly say how grateful we all are that they are willing to climb into their cruisers day after day.


Coursework with law enforcement officers has a different “timber”, a different feel, a different urgency to it.  When we were working reloading drills on the range, in the dark, in the cold, in the rain . . . and the reloading process went sideways . . . it was always with the knowledge that in real life it could mean the risks to the officer would climb dramatically . . . to the point where the trip home might well be in a Ziploc.  It brought home individual training, individual range work, individual work with the patrol rifles to ensure that everyone could run them smoothly and consistently.


I allowed me to realize just how safe and easy my life is in comparison.  These officers are at risk every day in ways I have not been in well over 40 years.  Sure, I could happen upon an active shooter, be attacked in a parking lot, walk into a robbery or face a home invasion.  All of us who teach and practice defensive shooting skills accept this.  A law enforcement officer is charged with going after the “bad guys/gals” . . . every day . . . it’s their job.  It’s humbling to recognize this difference . . . and it makes me appreciate them even more.


Finally, I am probably my own harshest critic.  I expect to do better that every other shooter on the line.  I expect to exceed minimum expectations.  I expect to do my best on each and every drill.  I’m confident that every officer out there had exactly the same expectations of themselves as I did.  I am happy to have been shooting with “peers” . . . very well qualified, experienced and dedicated shooters.  We all held our own.


It was a good course, a good set of drills and a great time on the range.


Nice job Eric, it’s a very solid piece of coursework.  I’m looking forward to lending a hand any time I can.