Just the Basics – The AR Platform.  An introduction . . .

I see tons of new shooters at local ranges with new (or even old) ARs and they’re making holes . . . or “sightin’ it in”, or rippin’ off a magazine through a silhouette up against the berm . . . and little else.  Virtually all are capable of so much more.

Of course, there are dozens and dozens of book out there on the AR from the armorer level to the tacti-cool shooter level.  We’ve all rolled through a bunch of them I suspect.  So, why 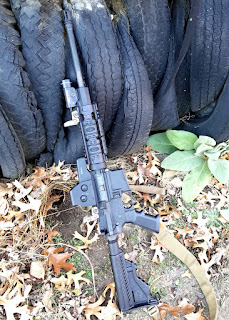 one more?  Because, frankly, I have yet to see one that provides me “Just the Basics” all in one spot.  I don’t need an armorer’s manual . . . but I do want to know nomenclature, how the platform functions, how to clear malfunctions, something about its ammunition and a review of the basic shooting positions.  I want “Just the Basics”.  And since I can’t find what I want, I intend to create it in such a way that will be useful to a new and inexperienced shooter as a basic learning tool and hopefully some instructors may find value in it for their basic AR courses as well.  If nothing else, just putting thought to paper is fun for me and hopefully educational for those shooters that I like to focus on.  So, what to cover, what to cover . . . here’s where I’m going.  Feel free to offer thoughts if you’d like things added.


The history of the AR platform.  It’s hard to know what you hold in your hand if you don’t know where it came from.  We’ll take a walk through the general nomenclature of the AR.  What is its cycles of fire.  I’ll summarize their primary assemblies – the Lower Receiver, the Upper Receiver and the bolt carrier group.  In the Lower Receiver, we’ll take a pass through the stock, the buffer, various trigger assemblies and modes of fire, the grip and the magazine catch and bolt catch.  The Upper Receiver will cover handguards, front and rear sights, rail systems, gas tubes, pistons, barrels, gas blocks and flash suppressors.  Finally, the bolt carrier group will cover the charging handle and all components of the bolt carrier.  When you’re finished reading each of these sections you should have a solid foundation of the AR platform from a component and functional point of view.


After the foundational information, we will chat about magazines, general maintenance, various sighting systems from the standard rear peep and front post to pop up backup irons to holographic options.  And, we’ll spend a bit of time on telescopic sights as well.  Then we’ll move on to various types of slings and flashlights.  Again, the idea is to provide foundational information for a basic defensive firearm, not a weapon to hang a ton of “furniture” off.


Ammunition will be part of the mix as well.  I’ll stick to 5.56 NATO, .223, 7.62 NATO and .308 Winchester.  We’ll cover the particulars of each round, their subtle differences as well as their ballistics.  Then we talk about zeroing your AR and then move to a review of the basic shooting positions – bench, standing, kneeling, sitting and prone.


That’s the plan with the intention of having everything completed by June and hopefully to the publisher so it’s out by the end of the year.  We’ll see how it goes.  My method for rolling out each section will be to provide a new index area to the blog entitled “The AR Platform”.  Each “chapter” will be posted there along with any appropriate images.  If you have thoughts on any post, you’re welcome to review and share them.  I will make sure you all get attribution at the end of the book for any suggestions you may offer.