A number of years ago I found myself sitting in one of the front rows of a church listening to my son-in-law deliver the Eulogy for his dad. The heart of the eulogy was that Richard had been a “simple man” – loving father, devoted husband, good friend, a union welder. Just a rock solid man . . . someone that was exactly what you saw.

Jeremy’s eulogy came to mind as I mulled over some thoughts for Memorial Day and the over 1.3 million soldiers that have lost their lives in the service of their country.

With slight exceptions between enlisted and officer, they all begin with an oath. It is a solemn promise to the nation that they will lay down their life if necessary to protect her. Those that have done so are honored today.

Most served quietly – those that are remembered in life by their families and in death by stone. Few attain lasting fame . . . all were simple men who chose to take up arms and face evil.

The line begins with these five . . . Crispus Attucks, Samuel Gray, James Caldwell, Samuel Maverick and Patrick Carr . . . killed at the Boston Massacre. The first in a red line that stretches to this day. 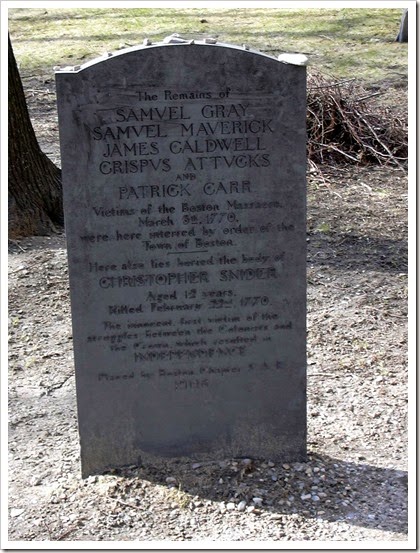 We’ve all watched film of “dough boys” going “over the top” during the gruesome battles of WWI. The raw courage is breathtaking. The majority of those men in the film are simply lost to history yet we would not be the world we are today without them, without their willing sacrifice.

Likewise I am humbled by the soldiers of WWII storming the Normandy beaches from landing craft faced by withering fire. Many died without touching shore. More died on the beaches. Yet all were needed to bring an end to a monstrous regime.

Battlefield footage of Korea is yet another example of the resolve of the American fighting man. Places like the Chosin Reservoir, Yalu River, Pusan provide stark reminders of the heart of America’s best.

Vietnam brought a different take on the American soldier – a willingness to serve regardless of the hearts of some Americans. As protests raged across our country the soldier did their job and we left over 55,000 on the battlefield.

Today we are engaged in a Global War On Terror. We have again left thousands of good men and women to move on to meet their maker. And we remember simple men true to an oath and willing to give their life that others may live . . . and be free.

I pray with all my heart that we do not forget this . . . that freedom against evil will always be paid in blood and sacrifice . . . and that our nation will always have simple men, simple women willing to step up.

Posted by eiaftinfo at 9:08 AM