May always brings the primary opening of scout camp in our council. While there are events year around, May sees a real push to prep everything for our annual scout camp beginning in Mid-June.

One of the “shake-down” runs for the shooting sports in the annual “Popcorn Challenge” that acts as a reward for those scouts that excelled during the annual popcorn sale. It was a banner year here with an estimated 400 scouts due to visit camp for the day. We set up 24 benches on the rifle range (doubled 6 of them up) and then 10 lanes on the archery range.

The process was simple . . . 10 minute safety brief followed by 20 minutes of shooting. The first course of fire was by-command only and from then on either a parent, RO or other scout leader assisted them in sending rounds down range one BB at a time. Targets were set out at 15 feet and we were off.

We honed this process this past fall and I must say we did not seem to lose much in the way of “polish”. The day ran smooth with the first shooters showing up at 9:30 AM and the last taking their seats at 3:00 PM. A rough shooter count . . . 288 Cub Scouts sending 30-50 rounds down range. A fine time was had by all to say the very least. This folks, is what it’s all about . . . 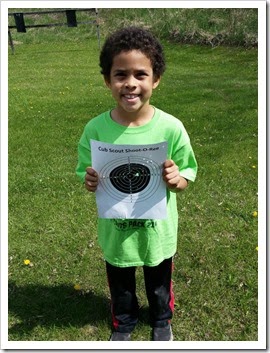 That said, I do want to take just a few lines to reiterate my comments of this past Fall . . . you can get a lot of good work done with a new shooter with a Daisy Red Rider BB Gun! Primary of course are the 3 NRA gun safety rules. It is a solid beginning for a new shooter. All the components are there – the requirement for safe gun handling, the fundamentals of mounting a rifle, sight alignment, sight picture, trigger press, follow through as well as a consistent sight picture rather than “following the hole”.

There is also the challenge for an instructor to be able to communicate to and manage up to – in our case – 30 young shooters on the range at a time. The standard is a RSO per 8 scouts plus the instructor. We had the added benefit that nearly every scout was accompanied by a parent. Events like this are great places to hone your skills helping a young scout work out the kinks.

It’s also a great platform to introduce a new adult shooter to a rifle as well. I had a number of moms who had never touched a firearm of any type break out in a great big grin when they sent their first rounds down range and saw the resulting group of holes in their target.

Taking a lot of words here to say . . . get involved with these new shooters. Scout councils across the country are looking for BB Gun Range Masters, NRA certified instructors for merit badges and help at their scout camps. I promise you the rewards will far exceed the efforts needed to lend a hand. And . . . make use of the lowly BB Gun. Your ability to set up a usable “rifle range” pretty much anywhere can give you a great deal of flexibility. And, once the mechanics are solid, the safety rules are ingrained in the new shooter – you can put a final polish on the student by moving them to a true rifle range.

Posted by eiaftinfo at 9:29 PM