On June 5th of this year I participated in a one-day Combat Focus Shooting Carbine Course taught by Rob Pincus of I.C.E. at the Brownell range at Big Springs in Searsboro, Iowa. 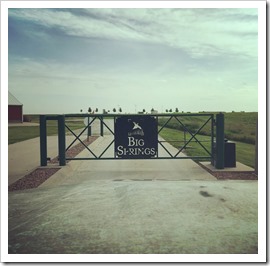 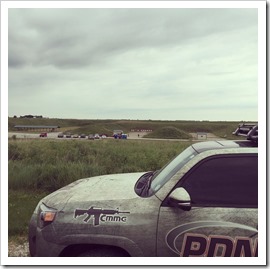 I’d attended the 2-day CFS pistol course last summer and was anxious to repeat it with a carbine as a platform. I want to chat about this AAR from a couple directions – my gear, how would the carbine be used for most defensive shooting situations, how does that effect equipment setup, thoughts on Rob and finally the course. 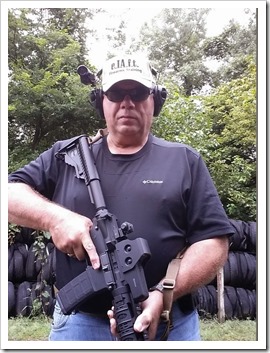 I have a DPMS Oracle .223 carbine. It’s a 6.4 lbs rifle less Back-Up sights, Eotech 517 and a loaded magazine . . . pushing 8 pounds fully loaded. Honestly, that’s not real noticeable for a range trip lasting a couple hours that doesn’t involve a great deal movement and actively engaging targets. Run the gun, and your body hard for half a day . . . and it takes its toll. By lunch, in 91*F heat on a crushed limestone range with 20ft berms on 3 sides . . . damn I was beat! Rob loaned me a backup gun that was probably 2-3 pounds lighter – what a difference! 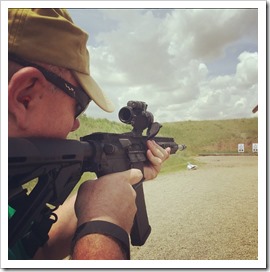 Next is the context of the training – the defensive use of a carbine. The most probable scenario would be a home invasion with my family behind me in a safe room where the distance to the threat would be across the room, say 15 feet-ish. So if you pick a typical range of engagement it would probably be within 0-30 feet, about the same as with a handgun. This is a little piece of reality that many defensive shooters miss when they hit the range with their carbine and spend all that time trying to make small groups at 100 yards or more . . . that is NOT a typical defensive shooting situation. Something to always keep in mind is that you will have to DEFEND YOUR ACTIONS should you engage and kill someone you view as a threat. Taking on a threat at 50-100 yards and still fulfilling all the squares under the ideas of “Ability, Opportunity, Jeopardy and Preclusion” may well prove to be difficult. Given this – the typical distance for the CFS Carbine course was in the 15 – and some out to 30 – foot range.

The setup of my carbine when I went to the course was a 50 yard zero, a set of flip-up backup iron sights and an Eotech 517. I use a 2-point Vickers sling and 30 round MAGPUL P-Mags. I’d forgotten my mag carriers so I simply dropped the loaded magazines in my rear left pocket.

“Thoughts on Rob” . . . really nothing has changed since last year – you can read that review here. He’s one of the most passionate instructors I’ve ever met and presents virtually all material – from carbine selection to running the gun to explanation of the flow of the drills – with a great deal of depth. He is NOT a “do it my way because I said so!” He’s much more a “do it my way because of this and this and this . . . and feel free to challenge the shit out of what I say because it makes us all better” kinda guy. That is very rare in the training community.

Let’s chat a bit about the course structure. One of the elements I like most is that he begins with a solid foundation. For the carbine that meant beginning with your stance (squared up to the threat), carbine setup (sling properly mounted and slung on your body, length of the butt stock, and some conversation of your grip on the front hand guard). The goal was to be able to come up from the ready position to the firing position in such a way they you were already in alignment with where you wanted to hit and the transition to either holographic sight or iron sights was simply a matter of changing focus . . . no head adjustment on the stock was required. The geek term for this in “Kinesthetic Alignment”. This is one of the “rabbit holes” of discussion in the trainer community but my experience is that while the words used to describe the process varies, the actual existence of such a process is real – that is not in doubt IMNSHO.

The first series of drills worked specifically on Kinesthetic Alignment – learning to mount my carbine so I was already ready to shoot. In fact they were run with the optic off and the backup sights down. Once we were all being successful with kinesthetic alignment only for center mass hits, the optics were then turned on. Returning to the context of the training – a threat within a distance of 15 ft, you have little time to “find your sights”. If you are “on target” when you mount your carbine, it takes milliseconds to transition to sighted fire should you have that luxury. 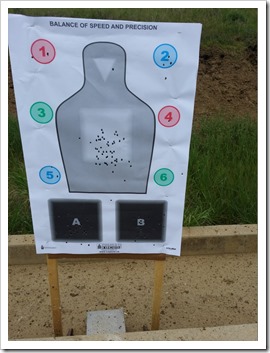 From here we moved to sighted fire. Most had some type of optic mounted to their carbine. Once some idea was achieved as to where rounds where hitting while using the optic we moved back to around 30 yards and checked zero. As I described a few posts earlier, I use a 50/200 zero so at the distances we were shooting my red dot POA was about 2 inches high. As long as I kept that in mind the precision shots dropped right in.

About this time you begin to notice the reliability of your specific platform. As for mine I noticed it was more than a little “sticky”. Something I had not noticed before and something most shooters wouldn’t notice wither unless they were running multiple drills each sending 3-5 rounds down range and rolling through multiple magazines during the drill set. Honestly, most of us don’t run our carbines that hard . . . we SHOULD, but we don’t. So smoothness of the gun is easily overlooked. For me specifically once it was re-lubed over a break the next suggestion was a larger charging handle (or order) and consideration of a lighter carbine – nice but doubtful. By lunch I was dragging to be honest. Rob hefted my Oracle and suggested I might try one of their spares which I did. Probably a couple pounds lighter and ran like glass. 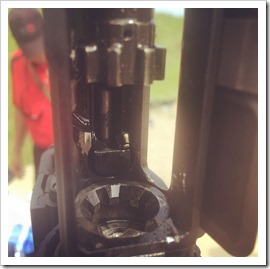 Other shooters noticed other operational issues as well. One had a batch of 5.56 ammo what was obviously loaded “hot”, so hot that the primers were exploding in the chamber sending parts into the bolt and locking the bolt closed. More than once he had to mortar his carbine (collapsing his stock and pounding the carbine butt first into the ground to break the bolt free). I also experienced my first every double feed with my Oracle. For many drills magazines were loaded to about 1/3 capacity to force magazine changes. For some this was an eye opener as well. Moral of the story . . . if this is your PRIMARY defensive weapon for your home, you need to run it on the range during your individual training sessions like you mean it! Then fix any issues with your setup, your carbine and your skill set. There are no second chances when the bad guy comes through the door.

As in the CFS pistol course, the flow of the drills from simple to complex just makes so damn much sense. It is a very natural progression, it is incremental and the building blocks are very clear to see. His process from last year’s CFS pistol course has had a great deal of an effect on the drills I teach and their flow in my own course work. It makes teaching the drills and learning the drills nearly intuitive.

Of course I had the opportunity for a head up my butt moment this year as well. (last year is was the non-Glock magazine that caught me). We’re shooting a set of drills and the shooter to my left was supposed to be the ONLY ONE SHOOTING. Rob says UP!! . . . and I send 4 rounds down range! I catch a foot in the thigh with words something like “Billy! Am I going to have to kick you in the ass all day?!?!?” Heavy sigh . . . and from that point on I was “Billy” as well for the rest of the day! The good news . . . on more rounds down range when it wasn’t my turn.

We moved through multiple shooting positions – standing, squat, kneeling and sitting. Notice no prone position simply because the chance of you using that position for a defensive encounter within the context of the course is very slim. 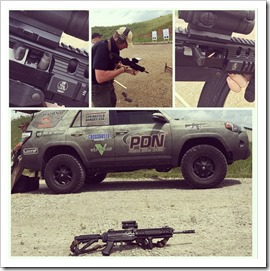 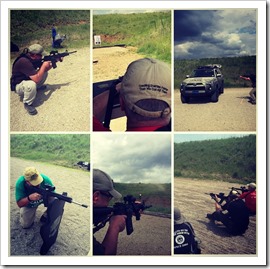 We worked on use of cover, “leaning” out around cover, alternate ways of shouldering your carbine whether leaning left or right, the offset between the barrel and the optic . . . just a lot of meat in this section.

We also used a vehicle (DON’T SHOOT MY CAR!!!) as we shot off support of the PDN tour SUV, over the hood, through the driver/passenger windows and finally under the front and center of the vehicle using a front tire for cover. 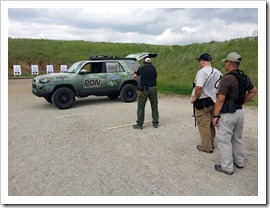 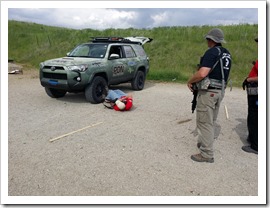 Add in some sprint drills, the use of a shield as a mobile point of cover, a bit of coach/pupil with the shooter in front of you during various dill sets . . . it was a very full day of coursework.

The day was wrapped with about a 30 minute feedback session to ask questions, clarify issues and to make sure we all had the opportunity to wring the last little bit of “goodness” from the day! 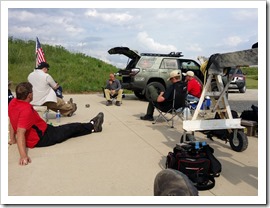 Very passionate instructor who comes at it from depth, not just do it because “I said so”.

It is a BUSY course but lays a solid foundation on what to work on when you return to your home range.

It will fully wring out your carbine and allow you to clearly see what is working with your setup and what you need to change.

This is one of the courses I’ve taken that I would urge you to find the time and dollars and fit it into your schedule.

It was a good day!