Training – What’s your purpose in buying a gun?

JR: You have a little time to work with me on the range?? I just got a new gun and I’m having a bit of time hitting the target.

So, through a couple fits and starts of two relatively busy guys trying to find an evening free . . . we finally got that done this week. I thought a review of how that all went might help all of those out there about to go buy their first hand gun. The choices JR made are very similar to what I’ve seen in other new shooters. Given a little forethought and planning – better choices can be made and – along with those better choices – money can be saved.

There are typically three primary reasons to purchase a handgun. Target shooting (or just plain “plinking”), personal protection or hunting. The specific purpose of the handgun goes a long way towards focusing a person on their purchase. I know . . . there are many posts to be written about handgun selection for each of these choices . . . but JR was past that – he’d picked up a Glock 26 for personal protection . . . so this post will start there.

Once a choice has been made – in this case a Glock 26 for personal protection . . . this begins to focus a new shooter on equipment, coursework and their own individual range training. An instructor really never knows how far along a shooter is in his/her training until they walk onto the range with them the first time. JR has never been a student of mine – friend, yes – but we’d had no time together in the classroom or on the range. As he walked onto the pad I was setting up the Tombstone targets in my current configuration of choice. I have a bunch of these darn things. They have been the target of choice for the NRA personal protection course (though I’ve since moved on to a different LE target) but with my increased emphasis on marrying in balance of speed and precision drills, tombstone targets are lacking just a bit. But, with the purchase of a 5-pack of colored Post-It notes, they turn into a pretty good option. 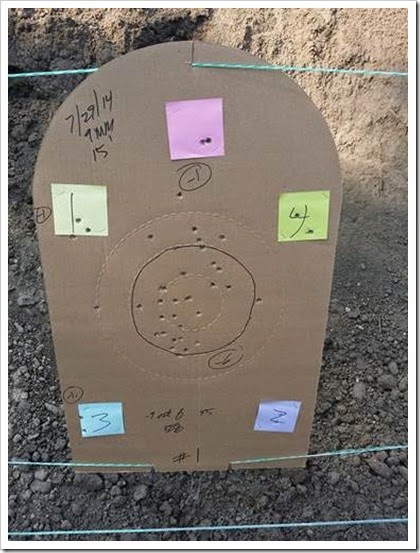 I was prepping a couple when JR arrived. “Oh, I brought some targets for you!” And he hands me a couple packets of typical shooting targets – the kind of thing you see guys using that visit the range a couple of times a year and then they grumble when that “can’t hit squat” as they send their annual 50 rounds down range.

I tell him to save his targets, I had it covered and went on to explain the purpose of how I was setting up the two Tombstone targets that I brought.

When you purchase a handgun for personal protection – that does a great deal to focus your individual training on the range. First, it determines practice distances. Most gunfights – 90% in fact – occur at less than 20 feet. A more recent evaluation of the data breaking it down by the foot revealed that 86% of gunfights actually occur within the 12-15 foot range. Very personal distances. What this means is that if you purchased a handgun for personal defense . . . and you are running a target downrange 30 feet or so and just making holes while standing rooted to your spot . . . your training bears no resemblance to the real world and it will not help you in an actual armed encounter. Nor do real world threats have clearly defined rings and target areas to help with aiming. In fact, with an attacker aggressively closing the distance between them and you – aiming as you would for target shooting is a good way to go home in a ZipLoc.

What this meant for JR was that we would be radically changing the way he conducted his training on the range. The distances would be 12-15 feet and his target for this evening would be the Tombstone target outfitted as shown above.

The second great effect the purpose of your handgun has on a shooter is a selection of gear, specifically belts and holsters. While I was prepping the second target, JR started to gear up. Out of his range box he pulled out a nylon dropdown thigh holster . . . OH HELL NO!!!! So we discussed this a bit while I pulled out my “range holster” a Blackhawk sportster. While not a perfect fit for a Glock 26, it was much better that the thigh holster and we were not going to do any draw-from-the-holster anyway. When you consider a holster – the purpose of your gun (or use that specific day) really drives your options. For every day carry something that holds your gun securely, can be worn comfortably and allows both holster and gun to be concealed well wins the day. For me it’s a Blackhawk IWB leather holster. I ask JR what he had bought for carry and he talked about a nylon IWB for his center back . . . and how poorly that had worked out. So as he put on the Sporster we talked about position, when he would carry (he’s a government employee and no guns are allowed), where he would carry . . . I suspect his next holster choice will work much better.

His belt for the evening was a wide, fairly thin cotton belt with a cinch buckle. Again, a poor choice but it sufficed for the evening’s work and he left with a much clearer understanding of a proper belt.

As for magazine carriers – I carry in my rear left pocket so the only time I really have one is during course work I take with other instructors. Otherwise there is a spare mag in my rear left – so that’s how I worked with JR.

Next on the list - why you went to the range?? If you find yourself going to the range to make holes on paper . . . please, find a way to expand on that. While I have no particular heartburn with this specific skillset – it typically will not save your life. What will is to be able to draw consistently, orient your weapon on the threat and to put 3-5 combat effective hits on the threat quickly. THAT will save your life . . . holes on paper? Not so much.

My purpose for JR this particular evening was to move him from a target shooter to a defensive shooter. And, to begin to give him a foundation in defensive shooting. We went to the firing line and I handed him my SIRT pistol. I like these things for new shooters. The have a good touch and feel, you can work on mag changes and the student can get “multiple hits” on a target while working out basic kinks in stance, grip, extension, “aiming” and trigger press. And, for very new shooters that have not taken much course work – they’re a great way to take an edge off the nerves.

We started with an “Extend, Touch, Press” drill with the SIRT and went from there. 5 minutes later we holstered an empty Glock 26 and went to the loading table to load two mags with 10 rounds each.

I start new shooters from the Compressed High Ready position. We chat about a typical startle response – how the body will instinctively crouch to lower the center of gravity and the hands will rise to put themselves between the body and the threat. Then, once a shooter’s weapon is in their hands – how to drive out from the compressed high ready and then how to quickly put 3-5 rounds center mass. Also sprinkled in are precision shots with one round to be placed on the called out colored/numbered square. An hour and a half later . . . 150 rounds or so later . . . it was time to call it quits for the night.

I teach for a number of reasons. I like people. And I truly believe they need to know how to defend themselves should the need arise. But . . . beyond that . . . . I like the smiles . . . . “So, did all this make sense JR?” I ask him as we head back to the loading tables. And I am presented with my best reward on the range . . . a big assed grin! “Yep Bill, it all makes perfect sense. I guess I should see if I can take those targets back!”

So, why did you buy that gun? How are you going to use it? How’s all that gear you have workin’ for ya? Is your individual training working? Are you “practicing with purpose”?

Posted by eiaftinfo at 9:00 AM