It had been way too long since I’d gotten in any range time to work specifically with my Carbine. I have a Panther Arms “Oracle”, 16” 5.56 with flip up sights, and Eotech 517 and a Vickers 2-point sling. Not a tricked out “pony”, just a solid defensive weapon. I press the trigger . . . it goes BANG! . . . I like that.

Let’s spend a few lines on what the most likely use of this defensive weapon would be (baring a zombie apocalypse that is . . .). These are typically viewed as a home defense weapon. Honestly, it’s not my “go to” choice, but for some it is. That typically means that your max distance would probably be the length of your house or the depth of your property – probably 50 yards or less. In fact, in the majority of cases your primary threat would probably be less than 25 yards away. I’d really have to dig for a scenario that would call for you to reach out and touch someone at 100 yards or more . . . but that doesn’t mean a 100 yard round shouldn’t be in your rotation – it should. Past that . . . and you’d have a hard time convincing a judge that an individual was a threat that you couldn’t avoid.

Next . . . what to work on?? Honestly, if I have one more guy on the range tell me he’s just gonna zero his AR today I’m going to bust a cork!! I last zeroed my AR in November of 2012 . . . 5 days after the Big O was reelected. I’ve touched nothing since . . . NOTHING! Do it right the first time and it will hold – you only need to “tweak” as necessary. But a whole re-zero process? Typically only done when new sights are installed.

Work on your FOUNDATION!! Your stance, your grip (both on the pistol grip and the fore grips), your stance, mounting your weapon smoothly, sight alignment, sight picture and trigger press. Add to that malfunction clearing, reloads, single round engagements as well as accelerated pairs. THIS is your foundation. THIS is where 80% of your personal range training should be focused . . . at all three distances – 25Y, 50Y and 100Y. Stick with these basics until they are just second nature. Today I used a timer with a staggered start time and a 2-second par time. This worked fine out to 50Y. At 100Y, precision becomes more of a challenge and remember . . . YOU OWN EVERY ROUND . . . make sure you hit what you shoot at!

My plan – start with single round engagements at 25Y. Three magazines, 10 rounds each. On the beep, starting at “patrol ready”, engage with a single round. Repeat until the magazine is empty, document the target, tape it and repeat with Mag-2, evaluate target, tape it and finish with Mag-3 with a final evaluation. 30 rounds required. The purpose? Working on perfecting ssssmmmmoooooooooooootttttthhhhhhhhh . . . smooth is fast, smooth is consistent, smooth it lethal. On the beep you must mount your weapon, flip the safe off, acquire your threat and press off a single round . . . re-engage the safety and come back to “patrol ready”. The second round of 3-magazines each are loaded with 20 rounds each. The process is the same as above but this time with an accelerated pair. Total round count, for all 3 magazines, 60 rounds. Total round count for the 25Y line – 90 rounds and a new target.

This same process was repeated at 50Y and 100Y. Total round count – 270 rounds for the morning with a total of 180 separate engagements. That provides you a tremendous amount of experience in how you are working with your AR – what’s working well and what you need to work on. Tedious – yep. Hard work – yep, it is. But . . . will it make you a better defensive shooter with your carbine? I believe it will.

Let’s look at my gear, what I mean by “patrol ready” and how this might help you make some choices in gear. 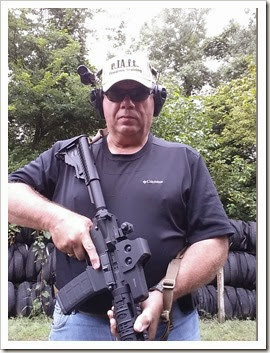 This is me at “patrol ready”. Nothing tricky here . . . No plate carriers because I probably won’t have one next to my bed. I have two mag carriers on my left hip, MAGPUL 30-round magazines, and EOTEC 517, “eyes”, “ears”, ball cap and a ContourPro camera mounted on my “ears”. I also have my Glock17 at 4 o’clock but I did not work on transitions today. That’s it . . . no fuss, no muss.

The camera is a tremendous asset. If you have not invested in one, I would encourage you to consider it. It allows you to “look over your shoulder” and catch little things – poor grip, fidgeting with your hands, swinging past your threat and then having to settle your weapon . . . all things and more that you simply can’t “watch” as your engage the threat. A camera will allow you to accelerate your learning – and again, that’s why your on the range, right?

My target was a standard NRA D-1 Tombstone target. 18” X 30”. For a hit to “count” today it had to be within the 8” circle – a standard I held for all three distances. If you look at the targets, you’ll see the “down count” for each round.

Single round and accelerated pair engagements. For this, 6 engagements per target. I score them, photograph them and then review the final target for “trends”. Let’s see what information that yields. 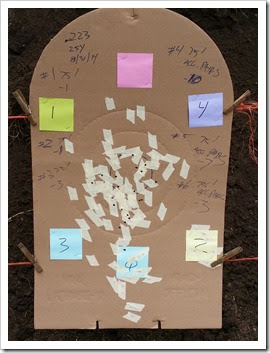 This target took a total of 90 rounds. The vast majority is within the outer ring – 12”. You can see a number of “flyers” primarily landing to the “south”. This typically is either anticipating recoil (not much of an issue with a .223) or just rushing the shot and jerking the trigger – much more likely. Also, by looking at the general distribution of the rounds you can see if you are developing any bad habits. This target shows a fairly even distribution of holes, the spread is simply my failure to balance speed (getting the round off in less than 2 seconds) with a precise shot. And that’s the trick isn’t it – getting that first round hit . . . first . . . in a combat effective area. THAT is why you come to the range . . . that is why you train . . . to hit first and to make that hit count. 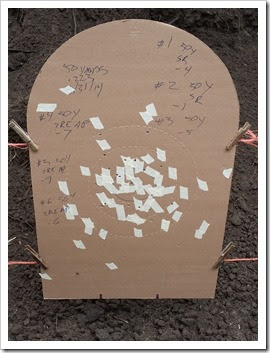 Here you notice that in many ways, the target has “settled down”. This is fairly typically too. The initial adrenaline has been spent, the first rounds have been sent down range and you can begin to really get down to work. While that’s nice on the range – real life is not so kind. Your first shot may well be your ONLY shot if you miss the threat. EVERY FRICKIN’ ROUND COUNTS . . . but that first one is critical. So while you might be happy with a tighter target 90 rounds into your range trip . . . in real life the possibility that you will have the opportunity to use 90 rounds to defend yourself is slim to say the very least.

Here you will notice the down count is lower, the majority of the rounds are within the 12” ring and more are within the 8” ring . . . pretty happy with this result.

Finally, always push yourself out to the max distance. For the VAST majority of defensive encounters as a armed citizen – they will be much shorter than 100Y. Yet, 100Y – at the end of your range trip when you’re starting to get a bit tired – is a great way to push yourself. 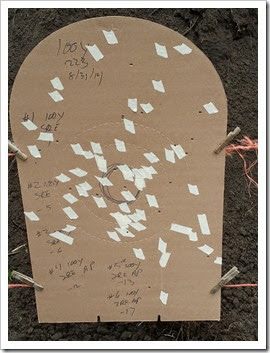 There the down count climbed significantly with about half within the 12” circle, about half of those within the 8” circle. Keep this in mind – distance and getting tired can have a profound effect on your ability to hit your theat. That said, the distribution was even indicating that it was body movement that was the issue. In real life, I would have used a more stable position – seated, kneeling, prone or supported in some way. As it was, I shot all rounds standing using only the sling for support.

For me, it was nice to shake off a few cobwebs, evaluate areas of weakness, and add that to plans for the next training trip.

Shooting is a perishable skillset. If a carbine is part of your plan to defend your family, you simply must get some solid range time in. Practice with purpose. Make a plan, work the plan, document your trip, learn from the results . . .

Repeat . . . for the rest of your shooting career.