Training – Are you paranoid enough?

A gun rights group in my region held an “Open Carry” night at a restaurant this week.  As folks do, a handful or so of photos were posted on an attendees Facebook page and one of my Facebook friends was linked in the post.  Two photos stood out to me and, while I realize keeping one’s mouth shut is the best route generally, I felt the safety concerns I had were worth the post.  Here’s the short thread with “J” that followed.  (Names and faces have been changed or blurred.  Not interested in bangin’ on these folks, just want to point how different points of view can lead to unsafe gun handling – IMNSHO anyway.) 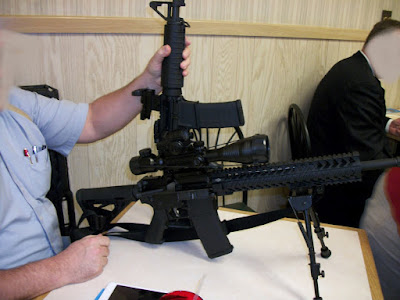 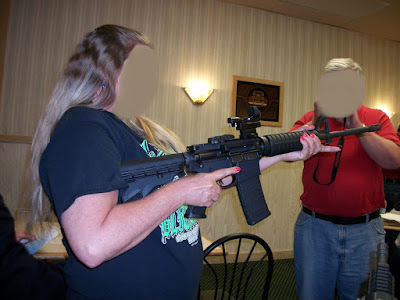 William Keller:   Honestly, how does this help us?? And as for the folks with ARs . . . "Guns are always loaded" . . . I assume if these are truly your defensive firearms the magazines are topped off and there's a round in the chamber . . . "Never point your firearm at something you're not willing to destroy" . . . what's in your field of fire? Any folks forward of you? How about the other side of the walls?? SMH . . . not helping, not helping.


William Keller:   Quite happy 20 folks peacefully assembled. But safely? Not so much, IMO. We are either all diligent in the safe handling of our weapons . . . or we are not. From the photos it would be virtually impossible for someone to have not been muzzled by one or both ARs. I see this as unacceptable.


J:   You are so wrong about this safely concern. When We Gather it is the safest restaurant in the country during that time in which we are assembled. Your paranoia is completely misplaced and objectively wrong.


William Keller:   With all due respect Jim, I'm pretty happy with my safety concerns. As an NRA Trainer, NRA Training Counselor, NAPSI Master Instructor and an adjunct law enforcement trainer, I do not see it as paranoid, I simply see unsafe gun handling and that is unacceptable.


J:   Just because you're an NRA trainer doesn't mean you're not paranoid. Even educated people or wrong sometimes. Feel free to join us, we always explain to people what the rules are , and we've been doing this for over 4 years safely.

What sad to me William , is your clear lack of understanding for those of us who gather peacefully. Nobody is making you join us.

I've already explained to you once that we are just a group of people gathering peacefully and don't hurt or bother others. That is another way that we are helping people in this country experience the freedoms our forefathers gave us. Join us or drop it.


There’s a fair amount of meat on this particular bone so let’s just nibble on it and see what we can find.


The general gist I took from “J’s” response is that the place they assembled is “the safest restaurant in the country during that time in which we are assembled”.  I will make the assumption that what he means by this is that while 20 armed folks are in the building some ass-hat isn’t going to come in and rob the place.  On a cynical level this is simply untrue if the robber doesn’t know their gathering is being held.  Robbers are creatures of opportunity.  If they see an opportunity – and have no clue there are 20 armed citizens holding a get together in the back – they may very well decide that today is a good day to take a run at the place.  Ya just gotta wonder how 20 armed citizens would choose to react if a couple armed criminals would hit the place.


How about the other end of the spectrum . . . say a local bunch of MS13 critters decide they’d like to pick up some more guns?  Couple of members pop in with a their AKs, put the whole “I’m gonna shoot their ass if they come here” thing to the test and then they take the guns and walk out the door.


This attitude is what I call the “talisman effect”.  Because I have a gun on me, I’m safe.  This is wrong . . . wrong, wrong, wrong.  What makes you “safe” is awareness of your surroundings, good gun handling skills and a willingness to use those skills to defend yourself, your family and those around you.  The gun is just the tool you have at hand.  “Murphy” can be a bitch at a time like this, don’t tempt him.


My second take-away is that I’m obviously “paranoid”.


Paranoid:       extremely fearful was so paranoid that he was afraid to walk the streets


characterized by suspiciousness, persecutory trends, or megalomania behaving in a paranoid manner with accusations of persecutions


My response is . . . “Yep, sure the hell am!”  And that is why when I teach a class there is no ammunition in the classroom, I verify that each and every weapon is empty and insure that two others do so.  I insist that if a weapon is on a table top it’s pointed is a safe direction, bolt open or slide locked back, ejection port up so I (and anyone else) knows it’s empty.  It’s why we do an emergence response brief to clearly define what the group that day will do should someone blow out their femoral artery.  It’s why I always have a blowout kit with me.


It’s why I obey “Da Rules”.  When handling firearms on the range, with a group of folks or out in public these, and only these, are Da Rules.  Period.


It’s why I carry every day everywhere I legally can.  We do not get to choose the time or place – the predator does.  Does this make me “paranoid”?  No, it makes me a realist.  Any one of us, at any time, can come up against “their day”, and a gun at home is the safe won’t do you a damn bit of good.  Carry it.  Every day.


Attitude also comes into play here.  Honestly, I have no issue with Open Carry.  I don’t do it.  I believe it gives up a tactical advantage.  I believe it draws an unwanted amount of attention to me.  I believe it makes the risks higher that an aggressive and determined predator would pick me as a target.  I do not see the “coolness” factor of open carry.  Yes, it openly demonstrates my 2nd Amendment rights . . . but makes me less safe and definitely a “shoot him first” kind of target.  So, I pass on it.


And, I don’t understand the whole open carry of an AR either.  I have a vehicle gun, it is an AR.  It is loaded and in “patrol ready” – 28 rounds in the magazine, chamber empty.  If you see me with an AR slung around my neck there’s a round in the chamber and 27 more in the magazine.  I will have full control of it and it will traditionally be pointed down and on a 2-point sling.  It will NOT be sitting on a table, magazine in, bolt forward and bipod extended.  How the hell do you not muzzle someone when your weapon is in that state??  I’m sure the argument will be . . . “Yes, yes, but it’s not loaded, I just brought it for show and tell.”  If that’s the case – and I pray it was in the instances shown in the photo – it’s still profoundly unsafe to handle a weapon in the manner shown by the photos.  We can all google up hundreds of articles of folks shot by other folks with “empty” guns.  Remove the frickin’ magazine, lock the bolt back, choose a designated area in the room to be the “safe” area and a direction to be the “safe” direction . . . and then I’ll be a bit happier.


I’m not trying to pick a fight here, but if you care about safe gun handling – this is not the way to go about it.  Follow “Da Rules”, insist that those around you do as well and be a good example.
Posted by eiaftinfo at 8:26 AM